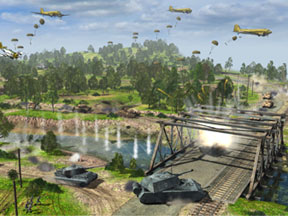 It is not easy these days to do something different in a well-played genre. I mean, when was the last time you really found something new in a Shooter or an RTS? Thankfully Srormregion has taken up the challenge with Rush For Berlin, a solid WWII RTS that adds a new element to the game: time management.

The game is set in the last part of World War II, when the allies were rushing towards Berlin. In real life, the United States decided to let the Soviet Union capture the Axis capital. But in the game, both the US/England/French team and the Soviets are trying to get there first.

As such, each mission concentrates on trying to accomplish objectives quickly, which if well played will inch your armies closer to the target. You generally won’t lose a mission if you are slow, but your rating as a battlefield commander will suffer. You are rated on a bunch of other factors as well, such as low casualties, killing enemy officers and accomplishing both your primary and optional objectives.

But doing things quickly is important. It is so important in fact that you will see a large slider bar at the top of the screen during every mission. The marker for the bar starts right in the center and as you continue your battle, the gauge on the bar will either go up or down. If it starts to dip down, then you are probably taking a bit too much time. If it is up in the green, then you are rolling along ahead of schedule.

Like most RTS games, you have certain buildings that produce units. These can generally be captured as well. The buildings have a limited number of resources assigned to them, normally around 1,000 or so. Building an infantry squad might cost 20 or 30 units where as building a tank is more expensive. But still, you have the ability to create a ton of units at each building.

Before long you will realize that it’s not really so much about the number of units you can build, but more so the time it takes to create each one. A powerful tank might take a full minute to roll off the assembly line. While the hit on your resources is nothing too great, the time you spend waiting around will start to cost you. So you have to ask yourself if it’s worth standing there waiting for the armor support, of if you can accomplish your objectives with just what you have. It’s a delicate balance.

I have found that normally it is worth it to create some types of units regardless of the time involved, like self propelled howitzers to give your forces a good punch, or scout units that can call in airstrikes, which will really tip the balance of power in your favor if used correctly. Then I normally load up the building’s queue so it will produce a lot of units on its own to both defend the facility and also act as a backup force for me while I am off accomplishing objectives. Sometimes you can scoop into your backup pool and bring them to the front as well without losing much time that way.

The enemy AI is very smart and since in the single player game it is mostly on the defensive, it can hunker down in buildings and bunkers and generally make the most of its forces and terrain. Thankfully there is a choice as to if you want an Easy, Medium or Hard game. I found that some of the levels were extremely difficult on Medium, but I was able to get through them on Easy after several tries. The only real gameplay complaint I have is that you can’t slow down the action, which would be a huge help when you are trying to manage multiple forces across several fronts. You can speed things up, though I was never in a position to want to do so.

Graphically, there is no RTS title that can really touch it. The various nations’ units in the conflict look extremely realistic and that includes both infantry and vehicles. A German Panzerkampfwagen VI Tiger II Revision B tank looks a lot different than an American M26 Pershing.

The world is fully 3D, so you can rotate in any direction to look down streets or over buildings. And you can zoom down to the level of your troops, which looks amazingly cool though has very little tactical significance since you can’t really command your armies from down there. Still, watching things explode at close range, many things will blow up in your game, is a real treat that should not be missed even if it costs you a few seconds to ogle it.

Amazingly, every single player mission starts with a cinematic cut scene. I thought perhaps I would get a movie like that to start the campaign, but was not expecting a real visual treat every single time a mission began. And you see another movie when you successfully complete a mission as well, which is a nice reward. These movies are all well done and really get you into the spirit of the game.

Each mission begins with a graphical briefing as well that really lays out the terrain and shows you where your forces will be traveling. This might seem like a minor point, but is an extremely nice touch and prevents you from getting lost when the level begins.

The sound is also top notch, with each unit speaking in their native language and a great background music score. Even the menu screen is nice with trucks rolling by and airplanes flying overhead. You get the feeling that you don’t want to hang out in the menu screen for too long, because you are missing the action.

When you finish the US/England and the Russian campaign, you can play a bonus German campaign where you are fighting a two-front war. Also you can play as France, which is mostly a defensive type of game and not really part of the "rush" concept. Both are extremely fun and I had a great time with those levels, more so than some of the main campaigns actually.

Multiplayer enjoyment depends on what type of RTS player you are. If you like, well, rush tactics, then you will be in heaven here. Online against others or even playing the computer AI, the winning team will be the one that can rush forward first with enough forces to kill off the enemy. Forget about playing as a turtle and working on your defenses. Go on the offensive and conquer the map.

You will find yourself breathing heavily as you complete your missions, always scanning the horizon for approaching danger. Rush For Berlin is one of the most intense RTS titles I have seen in years. Other than the ability to slow the action down just a bit to catch my breath, I could not really ask for more in a strategy wargame title.