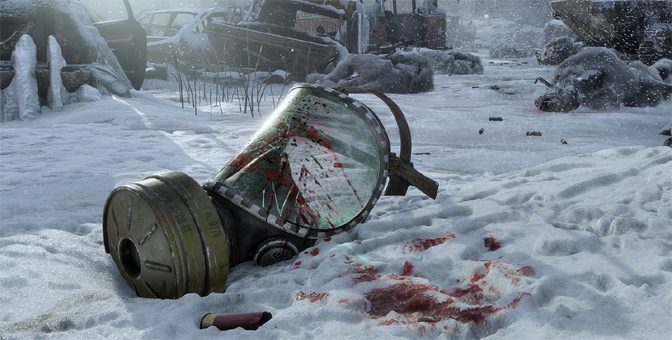 The Metro series has been a favorite of shooter players for a long time. It always offers a much more serious kind of post-apocalyptic game world compared to many of its contemporaries like Fallout 4. It’s also quite a bit more difficult to play than most games, owing in big part to the scarcity of ammunition (and the fact that in previous games bullets were also the currency needed to buy everything else), the unforgiving mutants that haunted the dark metro tunnels, numerous human enemies who were sometimes crueler than the tunnel’s monsters, and the claustrophobic nature of the levels limiting your combat options and letting bad things quickly get right up in your face.

Perhaps because the game is set in Russia following a nuclear war, the world is just a little bit darker than most. There is also a morality system that gamers either love or hate. If you do something considered evil, like kill a surrendering enemy, you will lose a morality point. If you do something good like find a missing teddy bear for a kid, then you will probably gain a point. Those points are represented by a brief screen flare when they happen, but aren’t otherwise recorded anywhere, leaving players to guess where they stand. At the end of each game in the series, including Exodus, the only way to get a so-called good ending is to have a high morality. So you have to be a good player, and kind of a good person too.

Pick up the amazing Metro Exodus from Amazon today!

When I heard that the Metro series would be leaving the cramped tunnels of the Moscow underground for an open world shooter, I was pretty skeptical at first. We got to go topside a few times in the other games, and it was never a good experience with dangerous radiation and sub-freezing temperatures making life all but impossible without lots of special equipment like heavily armored clothing and your ubiquitous gas mask. Even then, you had to change the filters all the time or would die anyway.

Early in Metro Exodus you learn that not all of Russia is as destroyed and inhospitable as Moscow. Some of it is gone for sure, but there are large expanses of land that are either untouched or perhaps lightly singed by the war. And in those places, life goes on for thousands of people in strange and unique communities. Longtime main character Artyom and his now-bride Anna end up busting out of the dying city against the wishes of Moscow’s current rulers (who are keeping the fate of the rest of the world a secret to help them maintain power) and end up accidentally taking the whole Spartan crew along for the ride.

The method of transport for most of the game is a huge, old train engine. It’s a rusty beast, and is completely awesome. The train will be your home base for most of the game, and there are even entire chapters that take place inside it where you get to chill out and relax with the rest of the team. These are some of the best sequences in the game if you ask me, and I enjoyed long conversations, dinner and drinks with everyone on board, but nobody more so than Anna, who really gets great screen time as a wonderful character who you will come to care deeply about as you play. Thankfully, your train expands as you play, with the Spartans acquiring and adding things like a sleeper car, a tanker and a whole vehicle service bay and workshop over time.

The one thing to note is that while Metro Exodus has been billed as an open world game, that’s not technically true, at least compared to games like Red Dead Redemption or The Witcher 3. It’s more of a conditional open world. Your train takes you to various destinations, everything from a forest to a desert, and then you play within that level for a while until you accomplish your goals and can ride your train out to the next stop. So it’s more like the open world of The Witcher 2 in that way. There is a lot of terrain to explore in each level, but its not a true open world. Even a game like STALKER has bigger levels, though it’s probably fairly close.

But about exploration, the levels are really well done. For an explorer gamer, there are tons of things to find well off the beaten paths. Unlike most games where the vast majority of buildings are just there for show, a lot of the dilapidated structures in Metro Exodus can be explored. You just need to find a break in a back wall, or a way to get to the roof to drop down a hole, perhaps a tunnel in from a nearby sewer or cave, or simply a window that can be shattered and jumped through. A surprising number of these structures have stories to tell through letters, photos and even bodies left behind. A few even have tape recordings where the former inhabitants talk about why they left their dwellings, or even why they were about to die. Nothing really points you to these places, and you can easily bypass all of them without even meaning to do it. But if you dig in to the game world and go places where you have no reason to other than idle curiosity, you will be rewarded, sometimes heavily – and more so than any other title in recent memory other than perhaps the city of Prague in Deus Ex: Mankind Divided.

From an environmental standpoint, the levels are really well done and varied. Even the people you meet all have vastly different cultures and values, which goes along nicely with their various environments. You will really feel like you have been across the vast plains of Russia by the end of the game.

In terms of shooing mechanics, Metro Exodus is also quite good. The guns feel a lot more responsive this time around. And you get to carry a portable workshop backpack where you can perform basic upgrades on your firearms and switch out components, though you still need to find an official workbench for cleaning and ammo creation. As always, guns are extremely flexible and can be configured for any role from silent killer to massive bust firing. I was even able to effectively use the Valve sniper rifle this time around, in close combat no less, whereas I could never master it in the other games. But boy, I loved to hear that sonic boom and see the bad guys scatter when I started firing that thing in Exodus. There is also a new weapon, a powerful and silent crossbow, that has a real Half-life kind of feel to it.

Enemies in Metro Exodus are smart, at least the human ones. They take cover. They call out your position to their buddies. They occasionally use grenades and Molotov cocktails (though they are rare, as always, in a Metro game). And, if you are mopping the floors with the entire group of bad guys, the few surviving ones will sometimes surrender instead of getting themselves killed. You can knock out surrendered enemies so that they can be looted, and it wont cost you a morality point because you are letting them live, perhaps with just a bad headache to remember the encounter.

Graphics and sound are top of the line. Playing the game using the Steam platform on the PC (I will briefly address the controversy on that platform) was a great experience. Even though I had to set the graphics in places to medium quality to get better performance from my good (but not the newest and greatest) graphics card, everything still looked extremely realistic. I honestly just loved standing on the front of the train engine, Titanic style, and watching the countryside roll by while having a smoke with some of my mates. I will say that the countryside scenery exists in a loop for the different environments, though you have to watch it for about ten minutes before you can notice. The developers probably didn’t think anyone would spend that long just watching the countryside roll past. That’s forgivable since this is not a TrainSim game. And this is balanced by the fact that you can make the whistle blow if you jump up on the engineer’s platform!

The sounds too are amazing, and every character has a great voice actor backing them. They seem like real people, and you will come to really love everyone in your crew – a fact that really helps push the equally good story.

Shooters don’t often have great stories, but Metro Exodus does. You will really care for your team in a ride-or-die kind of way, and risking their lives is always nerve-wracking. They support you in all things, offering kind words, encouragement or just good old stories whenever you pass them along the train’s hallways, or when your missions cross out in the world. Sometimes, your crew will offer you side missions too, things like liberating slaves or fighting bandits, so its always good to talk with them whenever you can, even if some of your team can be pretty long winded.

This game was reviewed on the Steam platform, and it works very well there, with trophies and achievements, cloud saves and everything that makes Steam a great platform for PC gaming. But the game was actually removed from Steam by the publisher at the last second before release, because Deep Silver wanted the game to be exclusive to the fledgling Epic platform. This came after Metro Exodus was available for pre-order for months, and those pre-orders are still being honored. But for those wanting to buy the game on day one, it suddenly was not available. Personally, I think this was a really bad-mannered move by Deep Silver, and lots of gamers are extremely angry about it. It also was probably a stupid move, as thousands of Steam gamers are boycotting the title. I’ve also heard that it has been pirated more than any game in recent memory, supposedly in protest.

None of this is going to affect its review scores here at GiN, and even the gamers on Steam are heaping praise on Metro Exodus, while still fully supporting the PC boycott. It’s just a stupid and unfortunate controversy that developer 4A Games doesn’t need as it tries to take its franchise to the next level. Deep Silver should be ashamed for treating its developers and the game’s community of players so poorly. Hopefully they will reconsider this decision, because people should be able to play and enjoy Metro Exodus however they choose.

In the final analysis, Metro Exodus is able to fully expand the series from a tunnel-based shooter to one played on a really nice, semi-open world. It does this while keeping its heart intact and not losing all the things that make the series so fun to play. In fact, it gets better in every way and even provides what will likely be considered an award-winning, epic-level story to experience and enjoy. And now that we are out in the wide world once again, the possibility for sequels are literally endless. My hope is that we will get to liberate those still trapped in the Moscow Metro one day, but any adventure out there in the new open world is likely going to be a very good one for this wonderful series.

One thought on “Metro Exodus Tunnels Out to Success”