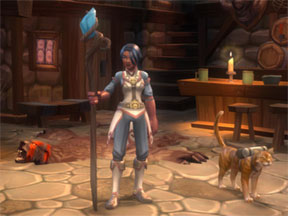 When the original Torchlight was released in 2009, it was easy to simply write it off as another Diablo clone. It featured the same dungeon-crawling gameplay, a similar level-up system and a never-ending quest for loot. It was even developed by the same team that was responsible for Diablo and Diablo II.

Yet there were differences between Torchlight and the Diablo series. Features such as pets and the roles they fulfilled, along with a powerful, albeit risky, enchanting system, set Torchlight apart from its spiritual predecessor. It was also able to be played by people of all skill levels, which opened the genre up to more casual players. Rife with charm and highly polished, Torchlight won RPG of the year in 2009 from Game Industry News, beating out the likes of Bioware’s Dragon Age.

Three years later, the team at Runic Games is back with Torchlight II, ironically released just after Diablo III. Once again, Torchlight’s finds a way to distinguish itself from the constantly-growing pack of dungeon crawlers. The brilliance of Torchlight II stems from its deceptive simplicity, while also maintaining a level of depth hardcore RPG players demand. Each time a character levels up, players receive five points to allocate among the areas of strength, dexterity, focus and vitality.

When a point goes into one of those categories, the benefits of it appear immediately. For instance, putting a point into dexterity will immediately show by how much the critical hit chance of a character is raised. Players can then continue allocating points, remove them, or even store them for later use until they decide which area is best to improve.

Each level up also unlocks a skill point that, like attribute points, can be spent immediately or saved for later use. Skill points are also unlocked when the "fame" meter levels up. Slaying champion monsters and bosses, along with completing quests, increases a character’s fame. The two systems in place together mean that level ups come fast and furious, constantly unlocking new or improved versions of skills.

As with any great action RPG, the level-up system only plays a part in the thrill of the hunt. The quest to discover fancier, better loot is what keeps players driving forward into increasingly large, daunting dungeons, and Torchlight II delivers on this front as well.
New and improved weapons can drop from anywhere at any time. Of course, heavily guarded chests and boss chests give an increased chance of yielding better rewards, but decent prizes can drop from any monsters. This adds even more incentive to slaying the hordes of monsters that roam around the landscapes of Torchlight II’s world.

Initially, these groups of monsters don’t feel as though they pose any threat to players. They’re relatively easy to isolate or smash with an area-of-effect attack. That soon changes, however. Within the first half hour of gameplay, small groups of enemies become swarms that can appear anywhere, typically accompanied by a champion enemy or a mini-boss of sorts.

That change of pace creates a true sense of challenge ‘ and subsequently accomplishment afterwards ‘ as you try to hold your ground against the onslaught of enemy after enemy. While doing so, having health and mana potions hot keyed is a must. Whereas Diablo III moved away from the potions system, Torchlight II takes no shame in encouraging, and even mandating, that players use potions liberally.

A large supply of potions isn’t the greatest asset players have, though. A pet accompanies each character along his or her journey, and with improvements in Torchlight II, it’s a most welcome companion. Players can choose from a number of different pets, all of them functioning in the same way with similar statistics.

Players can tell their pets to return to town, selling any unwanted items, and also give them a shopping list of basic items, such as potions or identify scrolls. In doing so, Runic has ensured that players spend a minimal amount of time out of the action taking care of tedious tasks and more time slaying monstrous beasts.

The real fun with pets comes from fishing. Fish can do everything from changing pets into different creatures to augmenting their statistics. Some fish even contain loot. While there isn’t much difference among the various pets in their initial forms, feeding a pet a fish turns it into a different beast with drastically varied strengths and weaknesses. When a pet gets changed, the effect can last anywhere from five minutes to being a permanent change, or until it receives another fish.

Of course even with a pet, the repetition of slaying monster after monster can cause gameplay to become stale in an action RPG. To combat this ‘ no pun intended ‘ Torchlight II supplies gamers with four main classes, each of which can be played in vastly different ways. The berserker, outlander, embermage and engineer all emphasize different tactics and focus on different skills to outmatch foes. What’s amazing isn’t just how different each class feels, though, but how different the same class feels when played differently.

As an example, I started playing an embermage, the game’s wizard class, and built my character around fire damage and dual wielding wands. One of the passive skills the embermage can unlock grants a chance to create a random effect whenever attacking with a wand or certain skills. Because of this, I’ve focused the character on hit-and-run tactics at long range, hoping for a meteor to fall out of the sky or a poison cloud to whittle away my enemies’ health.

On the other side of the coin, I started a different embermage, based on ice damage. Wielding a two-handed staff, my primary objective is to freeze a mass of enemies, run up to them, and shatter them with a melee attack. In both cases, the class is the same, but they play and feel nothing alike.

Variety isn’t just found in character builds. While the first game had players remain in and under the town of Torchlight, the second entry in the series takes players through a number of different environments. Everywhere from ice-covered hills to desert wastelands are open to players, with beautiful attention to detail all around.

That detail is evident in everything from landscapes to different weapons. Runic didn’t go for the realistic approach in its artwork, instead opting for a stylized, more cartoon-esque vision for their world. That decision paid off beautifully, making Torchlight II a feast for the eyes. Complemented by brilliant color, the unique art direction and attention to detail give the game a polish that sets it apart from others. The smooth frame rate doesn’t hurt either.

The only minor downside of Torchlight II comes from its story. Rather than act as an engaging narrative, the story feels more like a device to move characters from point to point. In this genre, that’s far from a make-or-break deal, but it’s noticeable because the rest of the game is so replete with content.

Despite that, however, Torchlight II’s presentation is spectacular. Sound effects work well to give a sense of just how enormous some of the battles are. Explosions, metal clanging and monsters growling add a nice atmosphere to the beautiful visuals.

Sporting a new game plus feature, exceptional gameplay and exquisite graphics, Torchlight II is a title that begs to be played. At only $20 and with theoretically infinite replay value, there’s absolutely no reason any RPG fan should miss this.