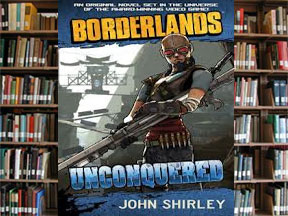 John Shirley’s second Borderlands book, Unconquered, is more cartoonish than the first but that fits the manic sci-fi world of Pandora. In this book the bus driving arms dealer Marcus Kinkaid tells the story of how Roland the soldier, Mordecai the hunter and Brick the Berserker took on the Gynella the ‘General Goddess,’ who has manipulative powers much like Circe in the myths of the ancient Greeks.

Gynella is not a game creation but a character made up by John Shirley. In the Mad Max world of Pandora, she rules the mutant Psychos through a pleasure-radiating device called the ActiTone. It enslaves those who have been treated by a dose of SusDrug. She stole this technology and traveled to Pandora as a way to make an army, which brings a fourth character into the mix, the assassin Daphne.

I enjoyed Shirley’s first book in this series because of the character Marla. She was a sort of regular person who, through crash landing on the wasteland of Pandora, must do everything to save her son. We got to see the extreme nature of this video game world translated by her reactions to it.

This second book stays within the minds of those that are native to Pandora, or who chose to live in its harsh environment. Roland, a decent man who used to be a soldier, treats the world like another battlefield. His friend Mordecai is more of a hunter who would rather shoot from a distance and is not as tough. They form a good team and Shirley gives them an easy camaraderie.

Brick is less of a character and more of a caricature. He is a humanoid tank that can throw boulders, break weapons and be easily fooled into complacency by Roland. He teams up with Daphne to trek across the hostile Pandora and they end up in a Roman style gladiatorial game overseen by Gynella.

This is one of the better scenes in the novel since Gynella and Marla have some shared history. Marla is on the planet Pandora to take out Gynella for stealing the addictive SusDrug. What you find out later is that Gynella has a grudge against Marla for one of her previous assassinations.

The characters in this book have to constantly scavenge the landscape and their dead enemies for weapons and food. They do this to get control of a mine filled with precious gems. The mines are also home to a small town that is trying to become a permanent city on the impermanent surface of Pandora.

This leads Roland and Mordecai to come to the town’s rescue as they go from battle to battle. Roland is even captured by Gynella and briefly placed under her spell. I mentioned early how Gynella acts as a psychopathic Circe. Like Circe, Gynella’s followers are men who have become animals because of a magic potion that enslaves them to her will.

The book is not very long and is a fast read. I felt the first book gave us something more than a regular read on a video game and invested in non-game characters. This book stays within the spirit of the game and balances combat scenes with comic scenes. It also concentrates on the characters in the game and makes them part of the foreground rather than being part of the background.

Borderlands fans can’t miss with this one, but it might not be as good a read for non-fans as the first one was.