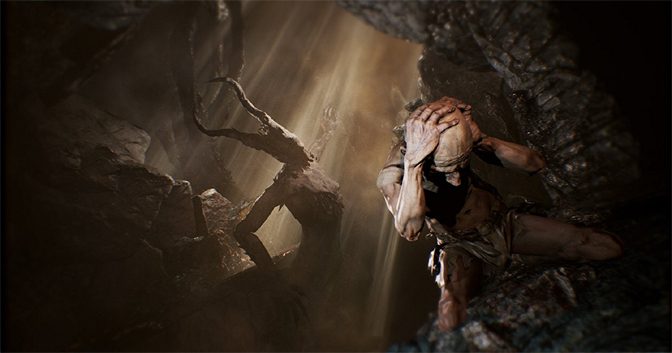 Agony is a very interesting game with a lot of very interesting marketing behind it: A first-person survival horror game using hell as its setting would definitely turn some heads, especially if the development team could nail the hopeless, visceral ideas that both the layman and occult fanatics would attribute to the lake of fire. The game’s approach to horror is very similar to Amnesia: The Dark Descent, Outlast, and games of that nature where you cannot really fight back, but you still need to find your way through the torment of hell in order to regain the memories of your past. So is Agony a hell of a good time, or should this game be buried for good? Let’s find out. 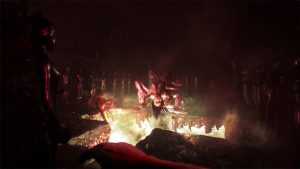 Let’s get this out of the way immediately: Agony, especially if you follow for its deleted scenes, is incredibly graphic and grotesque. I wouldn’t recommend this for those under the age of 18, and this definitely isn’t a game for your 9 or 10-year-old son to play. This goes doubly true for the deleted scenes that the developer released after, “Toning the game down” to achieve an M rating. One moment has your character ripping the throats out of disfigured babies in hell, throwing them to the ground as they scream, stomping on them until they stop, then shortly after reaching into a woman’s mouth and ripping out her organs/spine. If that sounds like the type of game for you, then keep reading. I just figured I’d save you some time if you aren’t into that sort of thing. 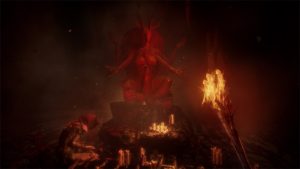 The story in Agony is difficult to talk about because the game has multiple endings, and begins with a protagonist who cannot recall any information about themselves (a common trope in the horror survival genre), so the game can end differently depending on some very deliberate actions you can take throughout the course of the game. The basic premise, though, is that the one bit of information you have is that you need to find the Red Goddess, as only she can help you. So, you set off sneaking and collecting items in order to find your way to her chamber.

[amazon text=Think you can navigate and escape Hell? Give it a try with a copy of Agony from Amazon.&asin=B07BKKCP8K]

Calling Agony survival horror may be a tiny bit of a stretch, in all honesty- the gameplay is more akin to a walking simulator or one of the older Myst games (only substantially more grotesque). Alien Isolation is also a suitable example because there are enemies in some areas that, much like the alien, you would need to sneak past and avoid in order to progress further in the game. Bypassing those enemies, you’ll collect items, solve puzzles, and even speak to and kill other tortured souls in hell (though the largest benefit of killing random ‘NPCs’ just seems to be obtaining one of the endings). 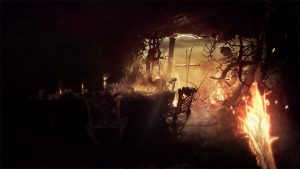 You can walk and jump around hell’s dilapidated and bloody landscapes, but there aren’t really any weapons for which you can protect yourself. You can collect torches and various other items to solve puzzles, but for the most part you will be hiding from and sneaking around enemies so they don’t capture you. You will also gain the ability to possess demons and other tortured souls in hell, though it’s mostly a vehicle to get from point A to point B (you can’t possess a demon and then, say, fight back). If you get killed by an enemy, your soul will fly out of your body and you will have a short time in which you can possess another body or completely die for good. For the most part, assuming you just keep a few unprotected bodies nearby, getting caught doesn’t really have any consequences outside of just losing a little bit of time (as finding bodies is usually not that difficult if you explore a lot, though it can be a pain in the dark areas).

If you do die, there are checkpoints hidden around the areas you explore through so that you can restart should the worst happen, but they’re kind of far apart and require seeking them out as you travel. If you’re relatively confident you can bypass most checkpoints with little issue. If players get lost, you can use Destiny Lines to try and find your way, but they’re strangely limited use and half-useless. The lines will point you where the primary objective is- so it can point you to a door, but not a key for that door. Actually traveling through hell is a feat, though, because the environments can be large and with a navigation tool that won’t be of use a substantial amount of the time, getting lost is a common occurrence in Agony, which will, in equal parts, waste your time but also make you intimately familiar with the landscape and its denizens. 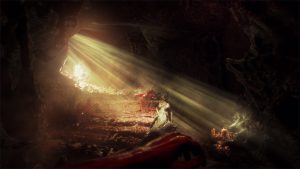 There are some substantial issues with the level design that could have otherwise been avoided, though. Because players don’t know where they’re going, it’s pretty common to wander around until you find the object(s) you need in order to progress through a certain door, but Agony dials this kind of problem up to 1 in some places and hard to see even with a torch due to insanely murky shaders. The shadows are pitch black and light sources don’t reflect properly, so it can be a huge pain to find your way around without increasing your gamma a sizable amount in settings. After increasing the gamma setting it was a fair deal easier to progress, just don’t leave it at the standard value unless you have special eyes, but before doing that it was stupidly easy to get lost in and around dark areas because of the murky shaders problem. Notwithstanding, there are also a huge number of glitches and, since the game isn’t great at giving direction, you may not exactly know what to do. 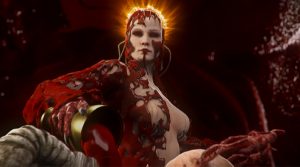 Some glitches experienced were: Trying to obtain a specific ending by burning off a monster’s wings but the command to use the torch doesn’t do anything. Or getting killed and going into possession mode  but being completely unable to move, almost as if you’re stuck in the ground or walls, so you have to restart from the checkpoint in order to even continue. Imagine that last one happening multiple times in one night. Or, playing succubus mode, you reach a part where there’s a blood waterfall and you have to progress without your body, but instead you just get killed and can’t progress without glitching through a wall (two wrongs don’t make a right, but apparently two glitches do!). Notwithstanding, the game had extreme stability issues and crashed a fair amount, which will lose you more progress than getting caught by any enemy in Agony ever will. Some of these bugs may have been patched by the time this review goes up, but when the game first came out you could have received more enjoyment from shoving the bristled end of a toilet brush into your own rectum rather than playing Agony. 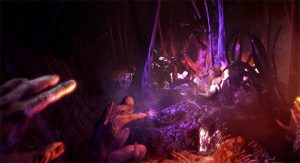 So, we’ve touched on level design, but haven’t yet gone over how the levels look: That is to say, the game looks incredible. The game is visually captivating: Walls and flooring look like flesh, rib cages structured through the ground, interconnecting along the floor. The organic, visceral appearance of hell is incredibly interesting, replete with rippling blood effects in crimson pools and offal composing various walls. The sound design is also top notch, as the cracking of bones and splurting and squishing can all be heard depending on the type of terrain you’re on, and it really enhances the feel of the environments, especially if you wear headphones. 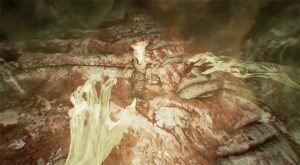 The game looks stunning, graphically, but the gameplay is more half-baked than Snoop Dogg when he first wakes up. There’s no fully-fleshed out stealth system or anything for sneaking: Sure, your screen will turn red and the character’s heartbeat gets louder when you’re near an enemy that can grab you, but  it’s not anything different than literally any other game that has ever added blind stealth elements to the game (blind because you know that someone is watching, but the game doesn’t indicate from where or any other information, which is a common mechanic). Sneaking past enemies and solving easy puzzles is really all you’ll do in Agony, outside of checking out the landscapes and succubi, I guess. There are memo pages that you can find that flesh out the plot a bit, which is great if the game manages to pull you into it. However, due to the ham-fisted scenario writing for the main story and how awkwardly its presented by disjointed voice performances, it may really be difficult to get into the lore. 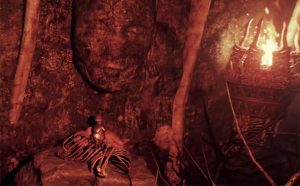 Overall, Agony isn’t a great game, especially not for its price. Pathing glitches that get you stuck in place and glitches that made runs of the game literally unwinnable (such as the succubus mode glitch) are pretty unacceptable as those are bugs that ruin the experience as a whole, almost. The graphics look great, especially the environments, so if you want a game similar to Amnesia: The Dark Descent but have beaten literally every other game of that type on Steam, then give Agony a shot (if they’ve ironed out the bugs). Otherwise, there are plenty of solid titles on which you can spend $30.