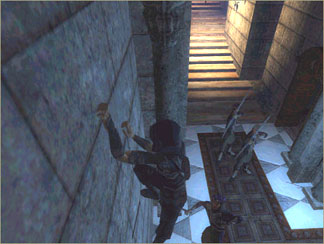 A foreword from Garrett, master thief: "My fellow countrymen, allow me to borrow a few moments of your precious time to set the records straight if you will. A grave misunderstanding has come to past as to the way society portrays our class of trade. Contrary to popular belief, thieves are not necessarily, quote "bad" people. "Bad" is such a dreadful label for people of our skill. I much like to think of myself as a businessman of the shadow. Yes, that title has such a pleasant ring to it. For you see, my noble citizens, businessmen are truly what we are."

"Ponder these words. Have you any clue of the thought process that goes behind a theft operation? The extensive surveillance, the sifting of vital information, allying with accomplices, drawing up the blue prints, bringing the right tools for the job and of course selecting the right stealthy attire. Operations of these magnitudes could not be pulled off by any ordinary means. Please do not mistake us for those foolish misguided souls who are daily dragged off to jail to have their hands lopped off for stealing some lamp oil, a mere loaf of bread, or a handful of veggies from the King’s private garden. These careless savages are no thieves at all, but more so, something along the same line as an "alley rat" and much deserving of the loss of a hand in the same fact. Even more so, if they were any thief at all they would not have gotten caught."

" No, friends our work is one of a higher calling and done with much more careful precision and so I leave you with these words: If you should wake up one ill-fortuned morning and find that your jewels, trinkets, or family heirlooms have mysteriously left the building or that your pockets seem slightly less weighted that the night before do not be dismayed. But rather look to the brighter side of things and be honored that your small fortune was lifted from your possession by the hands of a profound craftsman and not some benign scalawag just trying to find his next meal. Have peace in knowing that every ounce of your former belongings will be counted, measured, and weighted with the utmost accuracy and distributed for higher purposes.

Above all, do not take the matter personally, for we truly mean you no harm. No, instead I implore you to take only but a few moments to mourn your personal losses. Realize that there are more important things in life besides material things (Unless you’re a thief…). And remember…..*grins*it’s just business."

Sorry if I got carried away with that, but Thief: Deadly Shadows really puts you in the thief mindset. Just don’t go stealing stuff in real life.

Thief: Deadly Shadows, a product of Ion Storms and Eidos Interactive, is a stealth based game taken stage in the medieval era that seems to be built with the same blueprints as the much loved "Splinter Cell" series, but ultimately distinguishes itself from the rest with its unique twists and gameplay.

Thief: Deadly Shadows puts players in the shoes of Garrett, a master thief of the dark whose rarely seen and never caught.

Garrett works alone in the shadow of the night in the sprawling metropolis known only as "The City" constantly siphoning new information and eyeing his next prize. He’s definitely no Robin Hood, cynical and unenthusiastic about helping those in need and much more interested in his own personal gains.

He’s a legend among his own kind and yet seeks no personal trade. Instead his actions always seem to lead him into greater conflicts.

Garrett was inducted into a secret organization known as "The Keepers" at an early age, but later rejected their teachings and scorned them for their reclusive meddling. He went on to become a skilled thief. In fact, he became the best that ever was.

Though he has turned his back on them, the Keepers believe that Garrett is a key central figure in their glyph book of prophecies, which warns of an awakening evil and impending Dark Age. They have come to Garrett in hopes that his legendary talent can save the City from a dark uncertain future.

At the start of the game you we find Garrett on one of his random treasure expos. In the first mission players will get a chance to learn the controls and get a feel for how a thief goes about his trade.

While Garrett is a legendary thief, his combat skills leave something to want for. Nonetheless, a good thief manages to find other means to succeed. Garrett can walk, run and sneak slightly as he goes depending on what the situation calls for. He can lean sideways, while hidden, to peak around corners without being detected or avoid close encounters with guards and civilians by flattening himself against the wall and making himself almost invisible. A gem lets you know how visible you are, though you can use the ambient light as a guide too. Stand near a torch and you are going to be seen. Crouch in the dark frame of a doorway and guards will likely walk right past you.

He can also use this ability to creep along the wall past enemies or other obstacles. Not to mention he’s quite proficient at crouching, jumping and wall climbing. Among his other gifted talents are his ability to pickpocket individuals that he can get in close enough to.

Though he doesn’t have a heavy arsenal, he does have all the right tools to do his job. The lock pick is an absolute essential item to a thief. Unlike previous Thief titles, lock picking is actually an active part of the game here. If you get good at it, you will learn the pattern of tumblers and can blaze through locks quickly, getting to the other side of doorways without attracting attention.

Light is the natural enemy of any thief , and so it’s always good to bring a few non-combatant "water arrows" along with you. These can be used to extinguish hallway torches and to wash away any signs of blood.

Since stealth is his forte, keeping the noise level and distraction to a minimum is Garret’s goal. The "blackjack" should be the first weapon of choice when you need to get past a guard who isn’t yet aware of you. If Garrett can successfully sneak up behind him, he can successfully knock him out for the rest of the mission. You also have the option to use your trusty dagger to stealthily take out your enemy on a more permanent basis, but be careful, things could get messy.

Sometimes it’s better to take an enemy out from a distance with a broad head arrow. In particular one who is moves around a lot or thinks he hears a noise in the shadows.

When need be, Garrett can rely on other items such as explosives and hazardous flasks. Whatever scenario unfolds always be sure to pick the bodies up and hide them in the shadows to keep Garretts trail cold.

As you come into your own, Garret will gain access to other tools and items of the trade including "wall climbing gloves", a "Keeper Door Glyph" to reveal hidden doors to Keeper areas, and an enhancement to his "mechanical eye."

However, don’t get so carried away with the combat side of things that you forget what your really there for. Once inside, you should always keep your eyes peeled for clues leading to the whereabouts of hidden treasures. It’s the medieval ages and it seems everyone loves to record their life stories in their own private diaries. Use this to your advantage to obtain vital information to help Garrett complete his objectives.

Even though you might be on a mission for a special item, that doesn’t mean the rest of the place is off limits. Remember you’re a thief and so anything of value is an important commodity to you. You can swipe miscellaneous items that might have some worth at the shops you buy your goods from. Simply look for those items that seem to flash in the light as you pass by them. Sometimes it’s more efficient to pick a guards pocket than to knock him out with your blackjack. The more you learn to play your role as a thief, the better you’ll become at this game, and the more fun you’ll have.

Ultimately, Thief: Deadly Shadows is a game that appeals to fans of stealth games like Splinter Cell, Hitman, or Metal Gear Solid, but in the same respect has a unique role playing element of it’s own to set it aside from the rest. Great graphics, a good building story plot, fun and stealthy gameplay, and an anti-hero character that silently appeals to players as they make their way through ventures make this one a steal. Thief: Deadly Shadows is easily a sleeper hit. This one is worth a stealthy 4 Gin gems and I bet you didn’t see it coming.