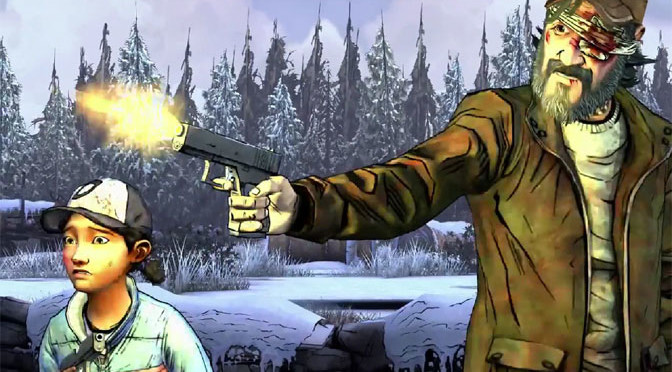 The Walking Dead Season 2 Episode
4: No Turning Back

The Walking Dead Season 2 Episode 5: No Turning Back has been released and I’m finally able to give my opinion on it and Season 2 as a whole.

As is the case with Season 2 of TellTale Games’s The Walking Dead, players control Clementine, the little girl players protected in the first season, in a world full of chaos following the outbreak of walkers. No Turning Back brings players right back into the series in the middle of the gunfight that started at the end of the last episode. The fight ends and players set out to find a home filled with food and supplies. As with all of my Walking Dead reviews, I’m stopping story details there for the sake of avoiding spoilers.

Decisions are a major part of Telltale’s The Walking Dead games. The decisions that have to be made in No Turning Back are some of the most important in the series and left me with a pit in my stomach and tears in my eyes. Even some of the things I did had me wondering how well I could handle a similar situation in real life and it lead to me not liking who I would be. When a game can do this to a player, it says loads about it.

I’ve been keeping track of my play time for The Walking Dead games since the very beginning, and I have stopped with No Turning Back. I clocked in almost three hours in this episode, which is a great improvement over previous episodes in this season. Keeping track of all of the episodes has given me a total playtime of roughly 10 hours. This is a far drop from the close to 20 hours I spent with the first season of the game and it’s a real disappointment.

When it came to dialogue and action in No Turning Back, this episode decided to focus on the dialogue. This is great as the strongest points in these games are when players have to make decisions that affect another character in the game. The more I talk to and interact with other characters, the harder it is on me when I have to make a decision that could cost them their lives. I think the series needs more of this and I’m hoping for that when the third season is released.

The graphics in No Turning Back are probably the best so far. There wasn’t an update to them look better, but I found no glitches in this episode. There were also more moments of characters’ attire and appearance changing due to what happens in the game, which is always a plus.

Audio in No Turning Back is great as always. The voice acting is wonderful and the additional time to talk with characters helped prove this. It was also really nice to hear Lee’s voice again. There wasn’t a special song at the end of this episode like there has been for the last two, but that felt appropriate with what all happens.

Overall, I still like TellTale’s The Walking Dead. This was one of the series’ better episodes and I greatly enjoyed my time with it. Season 2 is a little short, but it tells a great story. At the end of the day, I can’t tell you if Season 2 is worth picking up or not. However, I think those that do buy it will be impressed by its ability to drag them into the world and pull at their heartstrings.

The Walking Dead Season 2 Episode 4: No Turning Back gets 4 GiN Gems out of 5!