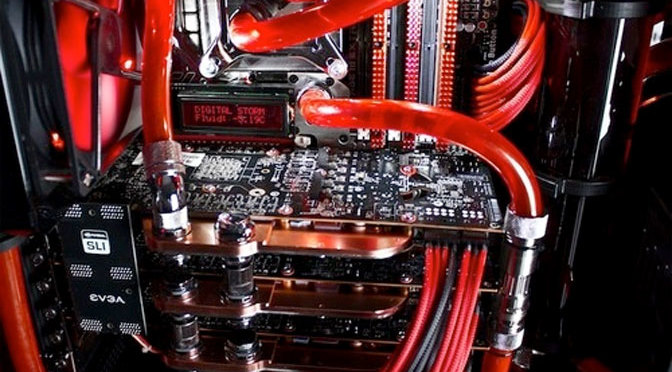 I’ve been the editor for Game Industry News for over 15 years now. When I started working with GiN, there was a pretty large emphasis in the industry, and throughout the world at large, on PC gaming. Then things began to shift to consoles. We began to hear wise industry pundits predict that the PlayStation 2, the Xbox 360 and the Gamecube would kill PC games.

For a while, it looked like those predictions might even come true. Certainly at my home at the time I found myself playing with friends in front of my console a lot more than I did sitting with my PC. And at the end of the day, having sat in front of my PC working for eight hours straight, the prospect of just being able to plop down on the couch, moving only my fingers to play a console game was and is pretty appealing.

However, we are now seeing a huge resurgence in PC gaming. In fact, PC gaming when looked at as a whole is much larger than the console market. So I don’t think there is any danger of PC gaming going away any time soon. In fact, there are several factors that will keep it strong for many years to come.

The biggest help for PC gaming is the sheer number of games available these days. Download services like Steam and GoG deliver thousands of choices to gamers looking for something to play. Most of these are indie titles or games that simply aren’t available for the console platforms. Even with Microsoft and Sony courting indie developers, we still get something like 100 indie games on the PC for every one you can find on the console. And they can often be purchased for a few dollars and can be downloaded and ready to go in just a few minutes.

Even when a console version of a game is available simultaneously with the PC version, it can normally be found much cheaper through one of the popular PC download services, especially during one of the flash sales that Steam is known for having.

And the quality of games found on the PC is increasing as well. One of the most anticipated games of the year for me, Wasteland 2, is coming out exclusively for the PC in a few days. And I can tell you that I can’t wait to get back out into the wasteland. And then there is Sid Meier’s Civilization: Beyond Earth due in October, another likely masterpiece.

Contrast that with what is going on in the console market, especially for the next generation titles, where many of the top tier games are being pushed back till 2015 and beyond, and it makes the dichotomy fairly clear. I will say that Destiny should help to change that landscape a bit, giving a boost to console players. I’ve certainly been playing Destiny quite a bit myself, but one wonders if it would be getting such positive feedback if it had a lot of next generation competition.

Then there is the fairly valid argument that PC gaming is more expensive than console gaming. There is something to be said for being able to buy a console system for $500 or less and knowing that every game made for that system for the next five to seven years (or however long the generation lasts) is going to work. However, on the PC side of the house, prices are decreasing. You can purchase a pretty nice system for under $1,000 these days. The implementation of dual and quad core technology as well as the new core i-family of chips means that even mobile platforms like notebooks can run most games.

Sure, you can still put together a super-system and drop a lot of cash putting it together. Doing do would likely allow you to play even high-end games using their ultra-high settings, meaning that they will look fantastic. It’s possible to spend $10,000 or more if you want one of those super-systems.

But they aren’t really necessary. I’ve got a much more modest system for gaming. Sure, it cost me about $2,000, but it’s lasted for several years so far. When it starts to get a little slow, I can normally drop in a new graphics card and extend its life for a few more years. However, even more modest systems run most games just fine. GiN Reviewer Todd Hargosh recently used a modest all-in-one system when his notebook died. And guess what, he was able to play most games on Steam, even though that computer cost less than $500. Some games needed to be reduced to medium graphics, but even so, they looked good. It convinced Todd to get back into PC gaming, even though he had turned away from it for years. http://www.gameindustry.com/editorials/hardcore/returning-pc-realizing-wrong/

One thing that computers have always been in the game industry is user-friendly when it comes to modifications to games. On the console, you might get some great DLC, but on the PC many companies open up their games to users to create their own levels, or even to modify the game in some ingenious ways. Companies like Bethesda Software even release official, and powerful, toolsets that makes everyone like a developer themselves.

I’ve never been a modder myself, but I do really enjoy adding modifications to my games. Some of them have totally changed the worlds I play in. My favorite of all time is called Blood & Mud, which came out for Oblivion and changed Bravil into a pirate town, complete with full voice support and a sinister plot that made the town so much more interesting than the plain vanilla one.

Most of my mods are smaller however. Some add more damage to weapons I like, or do cosmetic things like adding more books to a world or giving shorelines a rolling surf. I can certainly see someone choosing a PC version of a game that is able to be modded over a console title that remains static from the time it’s released, other than official DLCs or patches.

While I generally don’t recommend merging a work computer and a gaming machine, that is one way that people can justify getting a computer for gaming. Even though they are able to play games on their PC, they can also surf the web, write e-mails and do other tasks like composing papers, articles or anything on the same machine. So perhaps if someone is thinking about getting a new desktop anyway, they might be able to chip in a bit more money for a memory bump or a better graphics card and play good games on the same system they use for more serious activities.

Consoles are for gaming and that’s it, though they have started to incorporate other entertainment-related features like streaming Netflix movies. I know a few people who pretty much just use their console for movie watching. But that functionality is even greater on the PC, which can and always have been able to do just about anything.

The Cloud of Steam

The big wildcard for PC gaming might be the pending release of the so-called Steamboxes, which will allow gamers to take their PC games into living rooms and game rooms. This is essentially taking the PC game market into the family room and out of the offices, somewhere very few have ever ventured.

There is some question as to whether this is so much of a leap toward the console market that it essentially becomes a console itself. On that, I’m not really sure as it seems like a bit of a philosophical question. But the games will be PC-based, and it will become just one more tool for the PC side of the market to lure in more players.

PC Gaming is Here to Stay

Even when it looked like PC gaming would take a turn for the worst, I never really thought it would go away all together. There are just too many advantages to gaming on the PC, with the biggest one being that people are sitting there doing work on their computers, but would likely love to be doing something more fun. It makes sense that someone at some level would want to serve that market.

However, I have to admit that I didn’t anticipate the huge resurgence in PC gaming that is occurring today. I’m not one to evangelize one platform over the other. If a game is good, I don’t care if it’s running on a Wii U, a PlayStation 4, an Xbox One or a PC. That said, the PC does seem to have more than enough advantages to outweigh some of its negatives. It’s more than enough for me to confidently predict that PC gaming is in fact here to stay, for now and evermore.