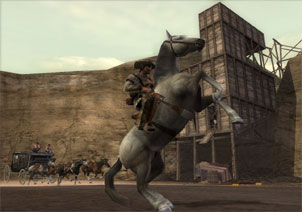 In a world of cookie cutter shooters, GUN aims high and tries to bring something different to the table. After a two day marathon session playing the game, I have one word to describe that effort: bull’s-eye.

Gun takes place in the old west. After playing the thoroughly enjoyable Darkwatch game, I was beginning to wonder if westerns might be seeing a bit of resurgence in popularity. Where Darkwatch was basically a horror story set in the old west, Gun actually tries to be somewhat historically accurate, at least in a Hollywood sense of reality.

You play Colton White, a man who hunts game with his father to sell to the passing riverboats going upriver to the towns of Deadwood and Empire. This is a clever way to get the player into the game and teach them all they keys they will need to learn, shooting quail and other game that does not really pose too much of a threat.

You can set the game to a difficulty level you feel comfortable with, from easy to normal to hard to insane. The normal level is probably best, as it offers a good challenge without being too insanely hard, except for perhaps in a couple of boss battles.

Your idyllic life on the prairie comes to a crashing halt as savages attack the river boat you are traveling on, and set a chain of events in motion that will lead White to discover a lot about himself along the way. The game’s strong storyline sets it apart from the run-of-the-mill shooters out there.

As the name implies, a good part of the game involves shooting various guns. You will have the opportunity to fire rifles, shotguns and special sniper rifles throughout the game, though your most handy weapon is your six shooter pistol. With your pistol equipped you can go into bullet time (whoops, does Max Payne have the copyright on that term) where the entire world slows down and you can see things in slow motion, but react at close to your normal speed. The result is that you can gun down a ton of bad guys in what seems like a long time to your character, but is in fact only a second or two.

When you come out of bullet time, bystanders often comment things like, "My God he’s fast." Any why not? Looking around when a battle is over you will sometimes see an entire street littered with dead bodies and even dead horses, yet you stand in the center of the maelstrom without a scratch. That is the power of the bullet time.

But bullet time is not unlimited. Called the Quick Draw power here, it is a limited resource that ticks down as you use it. To get more quick draw time, you have to kill bad guys, whereupon your gauge fills back up slowly. Sometimes if there are a lot of bad guys around, you can almost keep the drain equal to the extra time being added for kills, though this is extremely hard to do. And eventually, you will need to reload your pistol.

Thankfully the other weapons in the game are just as fun. I think I probably killed just as many people with the rifle as I did the pistol, since you can zoom in on fools trying to plug away at you with their obviously out of range pistols, and give them a quick head shot to end the fight.

But the most impressive part of the game is its non-linear nature. You can follow the main plot like an arrow if you want, or take on many available side quests. Side quests give you money which can be used to buy better weapons and equipment, and also increase your character’s statistics by adding more health or making you more deadly with guns.

The side missions are pretty varied. You can play cards (Texas Hold-em) at casinos, track outlaws by looking at their wanted posters, help the territorial marshal or the local sheriff keep the peace, ride for the pony express, work as a ranch hand or become a great Indian hunter. The missions are all pretty different and will keep you on your toes. You might find yourself working to roundup lost cattle in one mission and hunting down an infamous all-girl outlaw gang the next. So you can stay on your toes.

The only real problem with the non-linear gameplay is that it sets up quite a few logical errors in the plot. As an example: having just escaped from a town before getting hung, you can come right back into the town square to take a job with the pony express and nobody seems to mind that just five minutes ago you were a fugitive.

The other problem that was experienced was with the PS2 version of the game. Several times if we hit "X" to advance the plot following a mission (skipping or at least rushing the "new skills gained" screen) the game would lock up. The handshake between the world of the mini-mission and the overall main world seemed a bit broken at times. This could be a small annoyance or a large problem for PS2 players, depending on how often they saved their games. We would sometimes lose several side missions if we had not saved in a while before a lockup.

The voice acting is top notch, with a lot of Hollywood talent backing the major characters like Ron Perlman, Kris Kristofferson and Thomas Jane. The music is also very western and very much integrated into the game like a few notes when you win a poker game to a rousing soundtrack during major combats.

The game is rated "M" for mature and for good reason. It’s extremely bloody, and has a lot of bad language. Bandits call you an "a-hole" all the time when attacking as an example. And if you shoot someone and they are struggling on the ground trying to crawl away, you can stand over them and perform a scalp, which does nothing for the gameplay other than lets you watch them scream out in pain while the blood flies. I’m not really sure why this was added into Gun other than to simply put more violence into the package. Good stuff if you like that kind of thing, but I think a tad bit over the top.

Gun offers some variety in a packed genre, something anyone can appreciate. You can finish the game in about ten hours, and that is doing every single side mission available, so it might leave you wanting a bit more. But nobody should feel like they did not get their money’s worth with this well-made title.