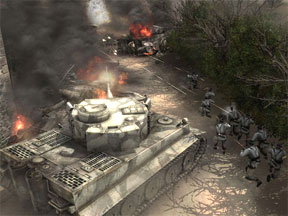 Company of Heroes: Tales of Valor

I love the Company of Heroes series. It has got to be the best looking WWII realtime strategy game of all time. When you zoom all the way in to look at units you will see mud splashes on wheels and realistic markings on individual soldier’s uniforms. Couple that with some great sound with soldiers yelling orders or complaining about battlefield tasks like constructing sandbag walls – "If I see one more bag of dirt"" and you have a heck of a great World War II experience.

Then developer Relic did something that was almost unheard of, or at least not popular at the time, and released the first expansion pack to CoH, called Opposing Fronts as a standalone game. You didn’t have to own the original game to play the new expansion. There were some advantages if you did, such as using new vehicles in multiplayer, but you didn’t need to have the (more expensive) original. This let you dip a toe into the CoH waters without a huge investment first.

Thankfully the new Tales of Valor follows this same format. You can pick it up for $30 off of Amazon in the link above, and be off to war with no experience or core game required.

The first campaign follows German Tank Ace Michael Wittman, who went into a British-occupied town with his lone Tiger tank and proceeded to destroy 11 tanks, two anti-tank guns and 13 armored personnel carriers. Although his tank was eventually disabled, he escaped to fight another day.

You begin commanding Wittman’s tank, and I’ve got to say that on normal difficulty levels, it’s a pretty easy stroll through the British town. The British tanks seem to have some type of tissue paper for their armor, while most shells bounce harmlessly off of your Tiger. In fact, the few really dangerous obstacles you face like anti-tank guns or large British tanks behind sandbags can be defeated by moving down a side street or two, and engaging them from the rear.

But even if you don’t do that, it’s doubtful that you will fail the mission. You have a repair button on your control panel. All you need to do is get out of the action for a moment and push the button. Your tank will then heal itself, so that even the little nickel and dime damage the British do to you can be repaired. This is actually a technique that is used in a lot of missions to protect the "hero" squads. Later on when you are controlling paratroopers, one of the guys has to die as part of the story. So to keep him alive, whenever a squad member in his platoon dies, you have a revive button that you can press to keep them at full strength. In a sense this is kind of cheating, and makes the game very easy on those missions.

However, you might be wondering why I put the difficulty level up to Hard in the score chart. That’s because each of the campaigns ramps up to a very difficult ending. The final one has you as the Germans trying to hold open a corridor in the Falaise Pocket so that as many Germans as possible can escape the Allied trap. You need to hold three river crossings against repeated assaults by American, Canadian and British forces. I admit that this one seemed rather impossible to me the first two times I played it.

I eventually learned that you can destroy the center bridge leading into the town, as well as two small footbridges. This forces the enemy to try to cross at two fords in the river, meaning you are defending two crossings and not three. The two fords are on opposite sides of the map, but you can concentrate your limited resources at them, laying mines, building bunkers, calling in artillery, building tank barriers, and placing your feared German 88 guns to cover the approaches. You still need to keep someone watching the main bridge in case engineers try to repair it, but this can be a simple mortar squad that kills anyone who tries. Given how long it takes to repair a bridge, it’s doubtful that the engineers would make it if even under the lightest of fire.

There are other "defend this area" with limited forces missions in the game, but that last one is the hardest by far, though I can beat it every time now. The whole defending an area till death is actually part of new multiplayer gamemode called Stonewall, where you have to defend a town against waves and waves of attackers. Being a defensive RTS player by nature who loves building fortifications and defenses in depth, this seemed custom made for me, if only I had a little more time to setup before the enemy came charging.

Another new mode is kind of like an arcade game. Called Panzerkrieg, it has you driving a single tank in what could be a six way battle. You get victory points for killing the enemy, but the gameplay is basically like the old hunt in the maze type of titles, like the tank missions on Tron, or going back even farther, the old Atari 2600 game Combat. Unfortunately, you CAN’T play computer opponents in this mode, which is a huge disappointment. I guess the guys at Relic couldn’t program the AI to be smart enough with the limited scope of the game. So you are forced to go online and play against others, something I don’t really enjoy doing as I always seem to run up against some ace who has played the mission a million times already, who probably talks smack to boot.

Another addition to the game is direct fire mode, which I found more gimmicky than anything else. Basically you take control of a unit and can tell it where to fire. I have seen this done before and it’s always a little quirky, trying to add shooter elements to an RTS. It works okay in the Tank Ace mission when you only have one unit on the field, but for the most part the AI can choose targets faster than a player doing in manually.

My biggest complaint with Tales of Valor is simply that there are not enough missions. There are three campaigns with three missions each. Some of them are quite short. This is balanced somewhat by the really long ones like trying to hold the escape route for the German Seventh Army open, but still, you will end up wanting more I think. Company of Heroes fans will find Tales of Valor a fine addition to their collection, but if you are not familiar with CoH, you might want to start with Opposing Fronts or the core game before you branch out to try Tales.

Kudos goes to Relic for trying to do something a bit different than before. For the most part they were successful. There are those who won’t enjoy the focus on individual units, but thankfully for them, they have the more standard Opposing Fronts pack instead.