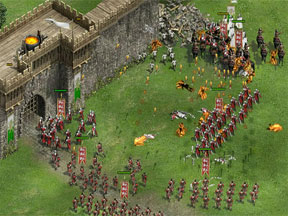 Especially in the medieval timeframe, it seems that games that try to do everything fail miserably. One only needs to look at Lords of the Realm III as an example of how not to make a strategy game with both battle and grand strategy. Most games like Stronghold for example, stick to just one element like battle and castle sieges to avoid this pitfall.

So it was a complete surprise to find Knights of Honor on my desk one morning. Looking at the game manual and the ad slicks, it seemed to be another game that tried to do everything. I installed it and decided to give it a try.

Boy, was I surprised and glad I did. While Knights of Honor is not perfect, it’s by far the best all-in-one type of medieval strategy game ever created.

Thankfully, the game starts out with an excellent tutorial. You are slowly talked through the different elements of the game by a narrator who patiently waits for you to try all the different menus. Without a tutorial of this level, the game would be much harder to play. But the tutorial gives you a good start that is necessary with such a steep learning curve.

There are two ways to play Knights of Honor. The first is a skirmish type battle where you either defend a town or attack an enemy. I would recommend you play this mode quite a bit to get used to how battle works. You will likely need it for the main game.

The full game is the true strength of Knights of Honor. You are the ruler of one kingdom from the Dark Ages. Just about all European kingdoms no matter how small are represented from Ireland in the far North to Sahara in the South (the Egyptian area) and East across the plains of modern day Russia to the providence of Georgia. Each kingdom is historically represented in terms of the resources found there and the general types of troops available at the start of the game.

Europe is a big place, and there are bound to be disagreements between people and kingdoms. Considering that religion is represented in this game, that is even more a forgone conclusion. You have Christians, Muslims, Orthodox Christians and others. If you conquer a kingdom that is a different religion than your own, you can hire a cleric to try and convert the new kingdom to your religion. This is expensive and your cleric might get burned by angry locals, but mostly it works, though it is a slow process.

As a ruler, you have many tools at your disposal. You can hire knights or assign your princes to various jobs within the kingdom like marshals to lead your armies, clerics to increase piety, landlords to help with food production, spies to infiltrate enemy kingdoms or merchants to boost your gold production. You need to be careful because if you assign your princes to a job, they can be killed doing it, which is a huge loss although they don’t cost you any gold.

You can even have your king do things like lead armies, but be careful because eventually, your ruler will die, so you need to keep him healthy long enough to father heirs. Normally you will pass the throne to your oldest son, though you can choose another son if you like, or even the husband of one of your princesses from another kingdom. This could cause a civil war however, so it’s best to follow the lines of succession if you can. And don’t ever die without an heir.

I will talk about the battle screens in a moment, but there are so many other options available to you that they are a huge part of the game. Lets say you are at war with another kingdom, you can request and audience with their king and propose peace. If they say no, then most games only give you an option for war. But Knights of Honor lets you turn up the heat without going to open warfare.

For example, you can ally yourself with a neighbor to your enemy. Then ask them to attack for you. At the same time, you can send a spy into the enemy kingdom. The spy will wait around until that kingdom is ready to hire a new knight for one of the jobs mentioned before. When they hire a knight, they might hire your spy! When that happens, you have an inroad with their court. If you are lucky, they will make your spy a marshal. Then the leader of their armies actually works for you. You can have your spy turn their armies against the ruler, which makes them all rebels. Then quickly recall your spy before they figure out what is going on.

Now, when you go back to the kingdom again, the enemy king finds his armies have turned to rebels and he is under attack from another kingdom. When you offer peace, there is a really good chance he will accept as there is no way he could additionally handle an invasion from your kingdom on top of everything else. You have gotten to your goal of peace without spending a drop of your own blood.

Interactions like that are common in this game. If you can think of a valid political or economic strategy, it’s likely represented here.

The battle screens themselves look good, though they lack some of the modern touches found in other games like the ability to zoom in or rotate the map. However, in a sense this makes the battles a bit easier because you can see an entire town on the screen and can plan your attack against its walls accordingly without any real surprises. The combat interface however is very unforgiving, so you need to be very careful with your orders. If real-time tactical command is not your thing, you can let your marshal run the battle for you. Depending on his skill, he can do a very good job for you. Losses to your armies can be replaced at any friendly town, though the influx of new recruits dilutes the experience of your units.

You can win the game by multiple paths too. If you conquer enough enemy lands, the rest of Europe will likely vote you the Emperor. Or you can use skillful diplomacy to convince others that your way is correct. You can even marry off your daughters to gain influence, though this is a risky proposition because when your ruler dies, the other kingdom can claim part of your lands. Another way to win is to get all ten major kingdom advancements, which is no small feat. But if you do, your technological superiority over everyone else makes you the obvious winner.

There is a multiplayer option, but only in single battle mode. I guess it would be nice to be able to play a full scale game against human opponents, but the amount of actions happening at the same time might be impossible to keep up with, or might even conflict with one another. So I guess it was left out of the game for now.

The most difficult thing about Knights of Honor is the learning curve. You can master the battle screens by playing the single battles a lot, but for diplomacy and economics, you will need to do a lot of trial and error. Even on the Easy setting, the game is pretty tricky. The enemy won’t hesitate to pull the spy trick on you for example, so that next knight you hire might be more than he seems. And your own peasants will revolt from time to time, which means you have to march out and cut your own people down before they burn all the farms and villages. Sometimes being the king requires hard choices.

My advice is to stick with the game even when it seems a little frustrating. It took me about three hours of play, often getting my royal tail kicked in every area, before I became proficient with the menus and the various paths to victory. Once you get to the top of that learning curve hill, the game offers some of the most enriching and exciting gameplay to ever simulate this period in history. The balance between thinking and fighting is just about perfect. Many will likely fall by the wayside on their journey there (many less thanks to the great tutorial) but I can tell you that on the other side it is more than worth the effort.

Knights of Honor earns 4 + GiN Gems for their treasury, one of many awards this title will likely receive in its long lifecycle. Crown this one king, for it deserves it.