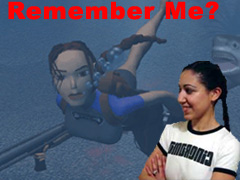 I'm excited dear play chums. It's an exciting time to be part of this industry we call games. What with all the next-gen shenanigans and E3 looming with all sorts of exclusive goodies. Yup, I'm feeling good and things just keep getting better.

Earlier this month it was announced that Eidos is giving us a new Tomb Raider game. Now, I know what you're thinking. Tomb Raider and the whole Lara Croft thing is so mid-nineties. Remember when Lara was a ‘gaming phenomenon; and graced the covers of men's magazines. And remember when men's magazines actually made money?

Then there was Nell McAndrew, who managed to make an entire non-career out of being a real person, decked out to look like a video game character. That's quite a feat in itself. Aah, the halcyon days of Lara fever.

Add to this the trail of abysmal games that followed TR 2. We've had our fingers burned by our favourite fictional British aristocrat explorer, but I'm willing to give Lara one more go.

Star Wars Episode III is on its way and I'm buoyed by optimism. George just has to pull this one out of the bag. We've bought enough Star Wars car seat covers and plush toys to give Lucas's grandchildren a comfortable retirement – it's the least he can do. And I guess my childlike hopefulness is permeating all areas of my life.

Word on the street is Lara's had a boob job. No, she's not even bigger – that's so 20th century dahling. She's had her most famous assets reduced, but apart from that Eidos is promising us a return to the old form of TR1 and 2. By all accounts, Lara's going back to doing what she does best"er raiding tombs.

The latest adventure is called Tomb Raider: Legend and is being developed by Crystal Dynamics, the team responsible for Legacy of Kain. First on the team's list of things to do was to find the very essence of Lara and reclaim her from the vomit inducing mess that was Angel of Darkness.

The big cheese at Eidos, Chip Blundell has said, "In setting the stage for the Tomb Raider franchise moving forward, we took ourselves back to Lara’s origins, asked ourselves the hard questions and challenged ourselves to think differently.

"Who is Lara Croft? What makes her tick? How is she relevant today? Only by answering these questions could we ensure that gamers get the experience they deserve."

Hmm, sounding like a load of old PR mumbo jumbo so far? Well hold your horses because Crystal Dynamics obviously realizes that you're all a bunch of doubting Thomases and have pulled out the big guns.

No, she's not getting bigger guns. Toby Gard, Lara's original creator has been called in as lead character designer. Galleon aside, Toby's at one with Lara and I think he could be just what this series needs to take it back to the sweet, sweet experience it was for two incarnations all those years ago.

"Even before the first title launched Lara Croft had to fight her way into the Tomb Raider franchise, since at the time most game characters were muscle-bound blokes," said Gard. So we just gave her big tits! (Sorry, that was me, not Toby).

"The Lara Croft character is resilient and totally unstoppable. In Tomb Raider: Legend, we explore these core personality traits and reveal the Lara Croft gamers have been waiting to see."

The TR games were always a showcase of stunning visuals such as animated hair and awe-inspiring lighting effects. Crystal Dynamics is promising more of the same this time around. Expect to see detailed animation of eyes, facial expressions, moves and abilities. Lara's face is also a bit more natural looking these days.

And gameplay hasn't been left unnoticed. Crystal Dynamics is going back to the roots of the TR series. We can expect actual tombs – always a plus – puzzles, and adventure type stuff like rope swinging I expect. Add to that a host of new aspects such as gadgets, more guns, frag grenades and toys to play with. There was mention of communication devices, so I'm hoping we're not going down the annoying Metal Gear route. And please, no stealth. We have stealth games for that.

It's all sounding very good, but so much could go wrong. In fact nearly everything that could go wrong went wrong already with the last TR game. Maybe the only way is up. But if they mess this one up, there'll be no resurrecting Lara again that's for sure.

There are still a lot of fans out there – myself included – who are hoping against hope that Crystal Dynamics hits the nail on the head. Please take us back to the gaming perfection that was TR2. It was in my opinion a better game. The music was absolutely stunning – a trait that was never repeated in any of the subsequent games. Baroque strings set the scene in Venice and Buddhist monks resonated in Tibet, transporting you every time you arrived in a new setting.

Venice was the finest level ever and created a balance of fire-fights amongst other levels that concentrated on solitary adventuring. That said though, TR1 did feature the hand of Midas. It has to be one of the finest gaming moments EVER!! Stepping into the Palace of Midas and jumping up onto the open palm of a stone hand only to be turned to pure gold. Absolute genius!

And the mirror image mummy was another classic moment no TR fan will ever forget. Bring us more of these Crystal Dynamics and I think we'll all be very happy bunnies.

On top of all these TR announcements, Eidos is the middle of a bidding war. This week it was announced that Elevation has withdrawn its bid to buy Eidos, leaving the way clear for SCi to make it a thoroughly English affair. With a new TR game in the offing, SCi will probably be keen to scoop up Eidos and nurse it back to health.