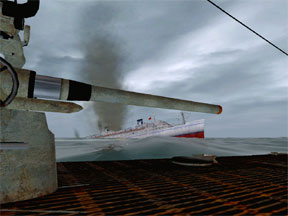 The last time the Silent Hunter series broke the surface, we were treated to bitmaps of ships floating on a somewhat realistic-looking ocean. This time you can zoom in and count the rivets on historically accurate 3D ships, just before you explode them into a million pieces and send them to the dark, dark depths.

You play a German U-boat commander at the beginning of World War II. There are also several historical scenarios like attacking the British base at Scapa Flow or trying to defend the battleship Bismarck when it launches. You can also start the war at different points, though I think the best thing to do in career mode is to start as soon as the shooting starts. The Allies don’t have good detection gear at the onset of the war or the best tactics, so you can enjoy over a year of near invincibility before they start to catch up with you.

Graphically, this title has no equal above or below the surface. You can walk around your UBoat from the captain’s bunk to the control room. Each area of the sub is dutifully rendered, and you also see your crew working at their stations. If you hire someone with a blonde beard and they are assigned to the radio, then you will see them there when you check that station, unless their replacement has arrived to take over while they sleep.

In this way you really get to know your crew. You manage them between missions, handing out promotions and various certifications to the men. Your crew can be injured or killed on duty, so you need to be careful, especially later in the war when even cargo ships start to get some type of armaments. To counteract this, I like to have at least one crew member with the medic certification. Also, your crew can get fatigued. When they do, they are less efficient at their jobs. You can wait for the shift change, or you can manually assign tired crew to their bunks, replacing them with more awake seamen.

Above the surface is a living, breathing world of ships and convoys. Even in the early days of the war, the enemy has plans in place to stop you. Some merchant ships try to go it alone, hoping to avoid trouble by running quickly and at night, while others group in convoys protected by destroyer escorts.

The ships look great. You can easily learn to identify them by the way they look and are given a recognition book to help with this task. On easier levels, your crew will identify targets for you. Military cargos sometimes even betray themselves. On some ships you can see tanks or trucks parked on the decks, which make them a high priority target for sinking.

Launching a torpedo can be an easy or hard process, depending on how realistic you want the game to be. At its most realistic, you have to compute the speed and heading of the target yourself, which is very difficult. Sub captains must have needed engineering degrees to even have a modicum of success. Thankfully, since I am no good at math, I let the crew calculate all that for me. All I need to do is maneuver the sub into the correct position, keep an eye out for the escorts, and fire. You can even "aim" at different parts of the ship. I have found that even the largest vessels tend to sink if you blow up a magnetic-detonated torpedo underneath their engines.

But not every ship will go down so quickly. One stubborn troop ship took four torpedoes and although stopped and on fire, was still afloat. The convoy moved on but two escorts stayed behind dropping depth charges and trying to protect the injured vessel. But a ship dead in the water like that is, well dead. I made a wide berth of the ship that took over five hours, and came in from the opposite side. One final fish finished it off.

The sound compliments the graphics. You can hear ships tearing themselves apart as they sink beneath the waves, or the scary sound of approaching sonar pings when your hunters are getting close, or the even more terrifying sound of depth charges splashing into the water above.

The one area that might not make this game suitable for everyone is that not all the realism can be turned off. Just getting out of your harbor can be a pain as you have to navigate narrow channels and even some sandbars depending on your origin point. Especially early in the war, the Germans have some of the worst ports that require huge thousand kilometer detours to get to the open ocean, and you also have to run the gauntlet past England and her legions of destroyers. Once France is conquered, it makes things a lot easier. But you can’t skip to your patrol zone or anything, so be prepared for some real navigation and a lot of boring time acceleration before you get close to the action.

Also, the save game interface is a bit odd. If you load a game, then every game saved after that in your career will be deleted. Also, I was trying to delete some old saved games to maintain disk space, and the game deleted every saved game in my entire career file. I had to use Norton Utilities Un-erase to get my career back. So be careful in the saving and loading area.

You can also play the game online over a LAN, with up to eight subs working together in a wolf pack. And you can use the editor to build your own missions, for play online or just by yourself.

Sub simulations have come a long way since I played Gato back on an Apple IIe in beautiful shades of green. Silent Hunter III keeps that deep simulation tradition going, but with all the modern graphics and sound the PC platform offers. The only thing more realistic would be if the game sprayed cold salt water into your face. So for me, Silent Hunter III is just about perfect. It earns 4 + GiN Gems for pushing the sub simulation genre to places it has never been before, and for showing us just how real a game can be.