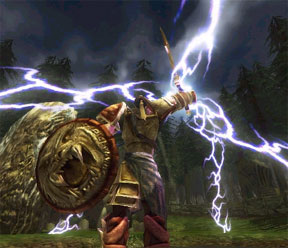 Peter Molyneux’s Fable has been a long time coming. First announced as Project Ego back in 2001, it was designed to be the most elaborate role playing title for the Xbox.

Now three years have passed and Fable is available on store shelves, and for someone who doesn’t spend a lot of time playing role players, I will admit that it is both elaborate and limited at the same time.

The storyline behind Fable is standard fare, centering on a young boy who will eventually become a hero. At a young age the child is orphaned when a horde of bandits attacks his village, leaving him with the assumption that he is the only survivor.

A wizard named Maze locates the hero and takes him to the Heroes Guild where he is given a new life as one of their own, and over the course of several years he is trained in mind, body and spirit to hopefully find those responsible for his village’s sacking.

As mentioned before, the storyline is rather basic, but what makes Fable a unique title is the development of the hero. Now in the last year or so we have seen games where actions determine the way your character turns out.

It has occurred in Knights of the Old Republic in the way of turning to either the Light or Dark side of the Force. Even sports titles like NASCAR 2005 are incorporating a Hero or Villain status, but Fable makes the whole game based on the idea. Its commercials speak out "For every choice, a consequence," and that is not far from the truth.

If you choose to go towards the side of good, you can help people that are being attacked by bandits, or give to those who are needy. As you achieve good status, you will earn the villager’s appeal (also known as Renown). They will talk about you and cheer you on, and believe it or not, some people will even fall in love with you. Even falling in love can reap its own rewards, leading to marriage and some extracurricular activity.

On the other hand, going down the side of evil also brings its own merits. You will be feared by those around you, and you can use that fear to manipulate them. Your appearance will also change to show your sinister side.

Either way, you cannot go wrong with your character, and that’s the beauty of Fable, the variety in character development is astounding.

Now while the development of the character is deep, I wish I could say the same thing about the story. The game plays similar to a cross between Zelda on the N64 and an offline version of Phantasy Star Online, which itself is not bad at all. The only problem is the main story is pretty short, as I was able to finish the main quest is a little over 10 hours. There are also subquests for both light and dark sides as well as mysterious Demon Doors that will only open by completing a certain task the Door requests, but a longer main quest would be appreciated.

Fable is an attractive game, using a unique art style of its own. Watching the character evolve into either a hero or villain is impressive as well. There is some slowdown at times but it doesn’t detract from the gameplay.

Fable’s soundtrack, however, is gorgeous all around. The opening theme composed by Danny Elfman is a work of art, as well as the music that plays during the rest of the game. Dialogue is also top notch and fits the overall mood of the game perfectly.

Fable is a long time coming, and if it is based on its original name (Project Ego), Lionhead succeeds. Only a longer main story would make the game perfect, but it still is quite enjoyable, and well worthy of the sales records it has been receiving.