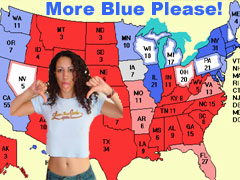 These days, people want more from their gaming experience. Gamers are calling for more realism, more freedom more choice and the ability to make real decisions that have real consequences in the gaming world. I'm using the word ‘real' in the loosest possible sense – for all you pedants out there.

The goodly games developers have frequently indulged our yearnings for more and given us free-roaming, non-linear experiences. GTA is the most successful of this new breed of game and reached its pinnacle of popularity with Vice City. And now San Andreas is pushing the boundaries once more as hosts of gamers continue their career development from thug to mob boss.

This autumn we've been spoilt for the choice we think we so richly deserve. Fable has given us moral choices, if admittedly dubious ones – surely kicking chickens isn't as ambiguous a pastime as the game would have us believe. First we run around creating havoc revelling in the power of evil. But it's okay because we can go back and do it all again, only this time we get to perform heroic deeds and heal the sick, or the girl in the barbers in Bowerstone South so that she'll love us more.

To misquote Aunt May, with great choice comes great responsibility. So we want choices do we? But recent history tells us that you give people a choice and ten to one they'll make the wrong decision. What were you thinking America? Did you hear the universal groan of despair from humanity when they heard the news over the past two days?

You had one thing to do and you couldn't even do that right. Whoever it was that voted Bush in for four more potentially catastrophic years isn't responsible enough to deal with free-roaming gameplay. Maybe we should have released an Elections Tycoon, race for the presidential election sim. Then you could have all voted Bush in again, seen what happens and created a new save game to elect Kerry in. Could have saved you all from making a grave boo-boo.

Maybe videogames are to blame for the state of affairs in the US, and maybe it all began with Space Invaders. The "kill all the aliens" ethos has truly embedded itself in the American psyche to the point that re-electing a trigger-happy nit-wit seems like a good idea. Maybe you've all spent too much time playing games whose sole aim is to eradicate hoards of aliens. This in effect is genocide endorsed by popular culture. Could everything from Space Invaders to Halo really have affected American foreign policy?

It's food for thought my friends.

That said, I really don't think anyone as right-wing as Bush kicks back in the oval office with a few hours playing Tony Hawk, and if he's had a really hard day, some Monkey Bowling with Colin Powell. Maybe the answer is Bush doesn't play enough videogames and therefore always goes that little bit too far when it comes to real life situations. When asked if he wants to play a game he probably always replies global thermo-nuclear war.

What he needs is a good dose of GTA style freedom to do what the bloody hell he wants to do. Let him loose in a non-linear gaming universe I say and keep him out of harms way – that's our harm, not his.

Yes, I'd like to thank you America for delivering four more years in which to ensure that you can remain the number one polluter. And thank goodness you've elected someone who can deal with gay people who want to get married (the gall) and raped women wanting abortions – really pertinent issues when the rest of the world thinks your president is an idiot at best and downright scary at worst.

After a disappointing week for world affairs and the end of British Summer Time, I am truly thankful for those rich, choice-laden games. Now the nights are drawing in, I can vent my frustrations on the streets of San Andreas, wreaking all manor of unlawful havoc, beating up rednecks and white trash. And in more sedate moments I may take time to make friends in DOA Extreme Beach Volley Ball – a digital lesson in diplomacy.