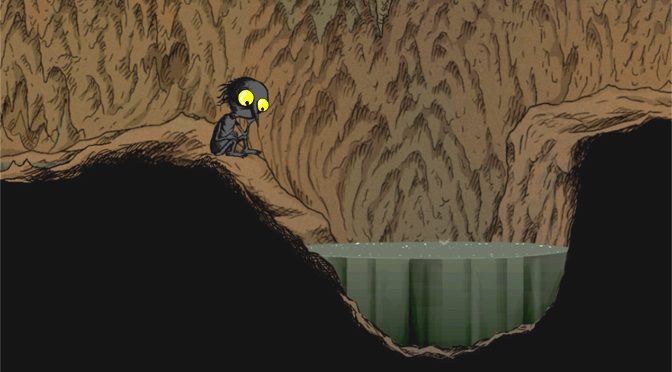 There are a lot of games that tout themselves more as experiences than games with strict mechanics that require a specific type of expertise to master. The Longing is one of these games- every single mechanic available in the game is present from the very first click, basically, and the game is really more about patience and puzzling than it is about testing your reflexes or game knowledge. The Longing could be quickly explained as the love child of Sierra’s old point and click adventure games mixed with modern day idlers, except unlike Sierra’s Space Quest titles, you don’t have to deal with hammy jokes or unexplained conditions that suddenly kill you. 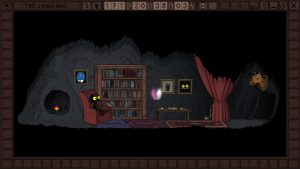 You control a Shade in The Longing, and you’re given the task of awakening your king after he has rested for 400 days. That’s it. The entire purpose of this game is basically passing the time until your arrival at the win condition, which is 400 real time days. You could legitimately start the game, close it, and then return over a year later so you can wake the king, then roll credits. Obviously while that’s something you could do, it’s probably the most boring option available to you, and is the slowest way to see the end of an already very slow game. 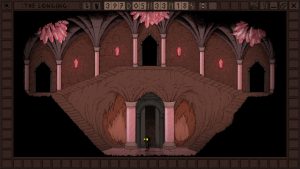 When I say The Longing is slow, I mean it does everything in its power to force the player to show patience. The Shade doesn’t run- he even tells you that he can’t possibly run. Probably because it’s hard on his knees, I don’t know. Doors open slowly as well, some taking two hours to do so, and your Shade considers it blasphemy to go through a half open door so you can either explore somewhere else or simply wait. Initially, it’s pretty aggravating, as it’s just a way for the game to suck away your time, but as you play longer it actually becomes… strangely endearing, in a way. That’s likely the intended purpose, and there are several locations that will require you just wait in order to proceed. 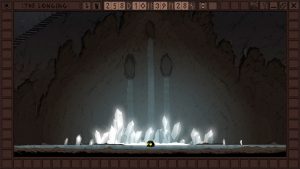 A stalactite dripping water into a small reservoir will make a pool of water you can use to reach a ledge if you wait a few weeks, while another stalactite will fall in two weeks that you can use to ascend a broken staircase. Thankfully, you can make the Shade auto walk, and he’ll do things even while the game is closed, which is where the idler game aspects come into play. You don’t specifically have to play The Longing and just wait for hours on end- you can close the game and touch base with the Shade later. 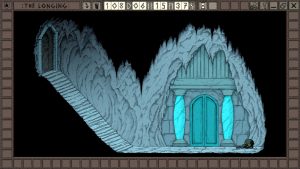 That isn’t to say that there aren’t ways of speeding time along, thankfully. As you explore the caves you can find things like books and paper. Reading the books can fast forward time a little bit, so you can break out four different parts of Thus Spoke Zarathustra to pass the time. Using paper allows the Shade to make his own drawings, and you can post them up around his room which will make time pass more quickly while he’s relaxing in his abode (it’s never blazing fast but just a few drawings will make time pass by 12 seconds or so at a time, which… take what you can get). 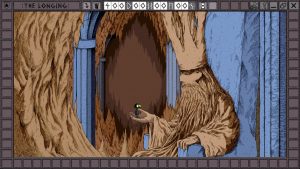 Inside the Halls of Eternity, for example, time stands still but it lets you wander for an extreme number of hours to find things like books, paper, furniture items, and the like. Oddly enough, if you walk a few hours into the Halls, walking out will take about the same number of hours- though you can auto-walk to kind of let the game do it for you, thankfully. You can send the Shade to a bookmarked location, which is very useful if you are slowly plodding toward a puzzle for which you think you have the solution, only to realize there was another item you forgot to grab. If not for the bookmark/auto walk feature, forgetting any part of a puzzle solution could be a loss of minutes or even hours. 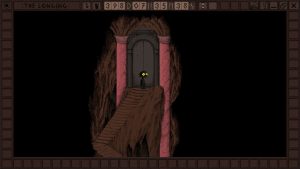 At the beginning of The Longing, the Shade is told by the king not to leave the caves, but as time goes on you might become a little more bold, a pinch more confident, and you might even find your way to the surface the king warned you about. To this end, there are multiple endings to the game that the player can experience, with waking the king as you were instructed merely being one of them. One involves a fair deal of puzzling, while another just involves waiting until the promised day arrives. Do be sure to visit the Shade on his birthday, no matter which ending you go for: The poor little guy deserves it.

So what we have here is a game with minimal game play mechanics that’s operated by an in-game clock that advances in real time. If that sounds familiar (*coughAnimalCrossingcough*), then you might also know that a popular thing to do in those types of games to cheat is fast forwarding your clock by some means- a method called, “Time traveling.” If you try to time travel in The Longing, you actually wind up getting penalized- so you better learn to walk, not run! 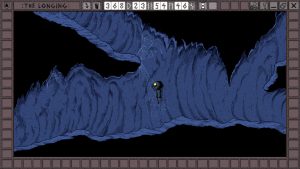 There is always some sort of dungeon synth music playing in the background as you explore various bits of the cave in The Longing. The soundtrack quite matches the visual appeal of the game, as the art is incredible. The backgrounds look hand drawn, and the lighting always matches the aesthetic of being stuck in a cave. Thick black shadows encroach on scratchy cross-hatching at the tops of pillars in various rooms to give the player the idea that light hasn’t touched the ceiling of the caves in centuries. The further you get from the king’s chambers, the more dismal and depressing things get. It’s very surreal, and can totally draw you in even if you only check in on the game from time to time. 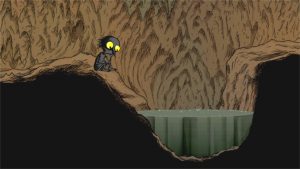 Overall, if you like point and click adventure games, try out The Longing. It actually has some interesting little things to do and is actually quite the interesting experience, when all is said and done. However, if you don’t like point and click adventures, don’t like slow games, or are looking for game play outside the realm of what amounts of idle busywork, then you should stay far, far away from The Longing, as it is at times more of an experience than it is a video game.

Big fans of adventure and idling games will likely have lots more fun with this title, as at its core, whether something is engrossing or just busywork is really in the eye of the beholder. Underneath the slow, plodding pace and endless time-based gatekeeping, there’s an interesting little game with themes of isolation, depression, as well as the concepts of immortality and eternity. Then again, as the Shade says…“Eternity is overrated.”