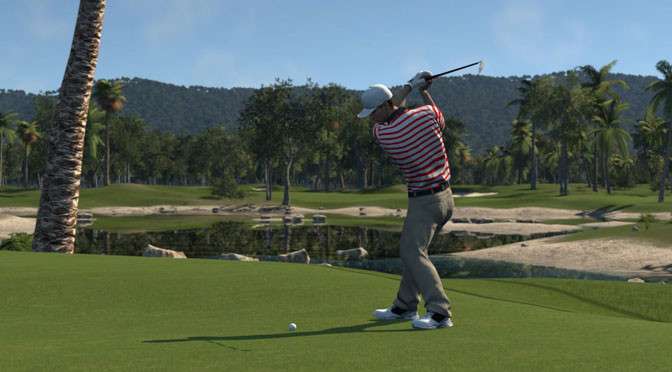 Golf has been a part of computer gaming for many years. Even the Atari 2600 console and the Apple II computer had golfing simulations, and I loved them, even though they offered little more than hitting square balls into larger square holes. The PC platform really began to push golfing simulations to the next level, adding features like better graphics and rudimentary voices that said things like “Looks like I hit the tree, Jim” based on conditions out on the course.

That said, it’s been quite a few years since I played a golfing simulation. I don’t think the genre fell out of favor, companies just stopped making them. Which is why it was such a surprise to find developer HB Studios’ The Golf Club Collector’s Edition coming out for consoles and the PC. The Collector’s Edition is published by Maximum Games and adds in so much content and features that you are in for a shock if you have not done computer golfing for a while. If you want to know what goes into making such a simulation, check out our interview with the developers.

First off, The Golf Club Collector’s Edition is gorgeous. The visuals for most of the holes could be dropped into any AAA role-playing game and become a believable backdrop. And most of the official courses which represent real places are very close to the real thing. I’ve only had the pleasure of visiting a couple of those courses, but the ones that I know look very much like their in-game counterparts. It’s really breathtaking in some places, and helps to capture one of the reasons people love playing so much, because the game of golf takes place in such beautiful settings.

There are also a lot of nice little visual touches, like wildlife that roams the courses depending on where you happen to be playing. I’ve seen deer, rabbits, goats and birds frolicking around on several courses. I even saw a whale rise up out of the ocean at a sea-side course and slap its tail before retreating back under the waves. And I found a rattlesnake living inside the sand trap out in the desert. Talk about a real course hazard!

The Collector’s Edition of The Golf Club includes a new tropical theme that includes palm trees and shallow tropical water hazards. They combine to make some really beautiful settings.

The sound design is also well done, and tightly integrated into the gameplay. There is an announcer who comments every step of the way, and the game normally calls it right when predicting whether or not a shot is going to land well while the ball is still in flight. When the announcer gets it wrong, like when your ball takes a bad bounce into a sand trap, he often apologizes for the incorrect prediction. He can also be quite snarky at times, goading you when your shot goes from the rough to the rough again, or when you mess up and putt your ball off of a green. He can actually be kind of annoying at times, but in a fun way — mostly.

Atmospheric sound effects are also quite nicely reproduced, from wind and weather to wildlife. There are even things like airplanes and cars where appropriate which lend a touch of realism to the overall experience.

Gameplay for The Golf Club is unique among golfing titles. The swing mechanic is natural. Whereas most other games feature trying to hit some key when a moving bar crosses the sweet spot, with The Golf Club you actually move either the console controller’s stick or the mouse. The faster you do that, the more powerful the swing. And the more you center that motion, the straighter the shot.

I really like this mechanic for driving and chipping, but not so much for putting. When hitting any shot other than putting, you are given a lot of information like how far you can normally hit with your chosen club on a perfect swing and the percentage of bite you are likely to get given the type of grass or terrain your ball is sitting in, plus the wind direction. It lets you make a good shot most of the time.

Putting is however a different story. You are shown the direction of slant on the green and how many yards you are from the hole, but don’t really get a good idea of how hard you need to hit the ball. The only way to figure out how to putt is to do a lot of trial and error. Even then, it takes a long time to get the feel right. On the PS4, I often found myself putting 30 yards past a hole or having my ball only travel a couple feet when it needed to zoom across an entire green to get anywhere close to the target. And in both cases, to me, the motion of the putt felt about the same. I think the addition of a putting practice area from the main menu would go a long way to letting people master that part of the game. Right now it’s a bit frustrating to get on the green in three shots on a par 5 hole, and then end up getting a bogie by three putting the final bit.

Surprisingly, The Golf Club is one of the best multiplayer games to come out in a while. Console games used to be all about having people gather around the TV and have fun together, but that has kind of slacked off in favor of single player titles and online multiplayer. It’s nice to find an interface where many people can play together locally. In fact, while The Golf Club is obviously targeted towards golf enthusiasts, we found quite a few people who didn’t play in real life lining up to join golf parties with this game at GiN world headquarters. It became one of the most popular titles in the common area for multiplayer matches.

On the PlayStation 4, a nice addition is that the LED color on the controller changes to match each golfer. That way if you are at a party, you won’t get the controllers mixed up because you will either be the blue or the red golfer with the corresponding glowing controller.

Of course there is also online play, and I never had any trouble finding a foursome to play a course with me. And there is ghost play where you compete against the ghosts of other players who have already played a round there. In either online or offline play, one of the most impressive features is that there is no load time between holes, making for smooth gameplay and no annoying wait times beyond whatever time your opponents are taking when it’s their turn.

New in the collector’s edition is a season mode, where you can take your persistent character through five different tour levels. Rising up the ranks from amateur to pro is quite exciting, especially if you are really into golf. Few of us can rise up the ranks like that in real life, but doing it with The Golf Club Collector’s Edition is the next best thing.

Besides just playing the courses, you can also design your own. The Greg Norman Course Designer feature lets anyone try to recreate famous courses, or any fantasy course you can think up. I played one that was based on the Red Dead Redemption game, and that was a real treat. There are thousands of courses available which can be sorted in various ways. Of course the quality of those can vary wildly, but most of the ones I found were pretty good. Some even were better in ways than the official courses, but in any case, you should be able to find one that matches your preferred style. If not, then go ahead and make one.

The Collector’s Edition also comes with a really nice eBook which is kind of like icing on the cake for a game like this. The book covers a lot of famous courses in depth with facts and trivia that you may not know and includes nice extras like interviews with famous golfers talking about the courses they love to play on, and specific holes that they dread. For fans of golf, it’s a really nice addition to get for no extra charge.

One thought on “The Golf Club Scores a Hole In One”