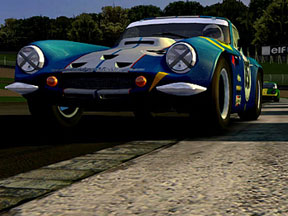 Last summer, developer SimBin came out of nowhere with the release of GTR. After my initial disappointment with the way the Gran Turismo series was going, the release of GTR was a breath of fresh air, combining a realistic simulation experience with the accessibility of an arcade racer.

The game wowed over myself and fellow GiN readers so much that it eventually walked away with our Game of the Year Award for Best Simulation.

Several months have passed, and SimBin has struck back with GT Legends. Continuing the high quality racing of GTR, the new game is a flashback to the GT racers from the 1960s and 1970s. Featuring over 90 cars from the same FIA teams that drove them, GT Legends is a classic car driver’s dream come true.

While starting off with a simple car like a classic Mini Cooper S, eventually your garage will grow to include other rides such as Corvettes, Jaguar MK IIs, right up to dream classics like the Ferrari 275 and the Ford GT40. Those familiar to F1 racing tracks such as Imola and Monza will feel at home, as Legends features over 25 variations of these legendary courses, more than enough to race these dream cars on.

Gameplay consists of single racers, cup challenges consisting of multiple races, and online multiplayer (up to sixteen racers). Like before, gameplay is challenging, yet accessible. With five difficulty levels available, anyone can get a feel for racing and not get blown away before they become a good driver. In addition, selectable assists such as automatic gearbox and clutch, assisted steering and braking, traction and stability control, anti-lock brakes, and damage models are available for more accessibility.

Control during races feels like the real thing, whether you are driving with a steering wheel or even an analog gamepad (my control of choice.) In addition, players with a TrackIR head tracking system will be able to look around in their virtual cockpit with just a movement of their own head and no need to fiddle around with cumbersome keyboard controls.

GT Legend’s overall package screams out 70s. Right from the opening menus, to the fonts on the in-game HUD, the visuals look like something that would come from a 70s television program. Car visuals are impressive, with every aspect brought down to their exact detail. The tracks are also a beauty to behold, whether at daytime or night.

Despite being able to race with a large grid of cars, SimBin recommends using an eight car field for night racing unless you have a powerful system. However, on my test system (an Athlon 64 4000+ laptop with 1GB of RAM, a Radeon X600, and an external Sound Blaster Audigy 2 XS card,) the game ran flawlessly with a high grid.

Cars also sound amazing; each one sounds identical to that of their real life counterparts, no matter how many are on the track at the same time. The developers actually recorded all the engine sounds. If you are a real car aficionado you will be able to tell what type of car is trying to pass you just by listening to the engine sound as it approaches. For everyone else, you can learn this by listening. And again, it is extremely impressive when all the cars sound correct even when running a full race.

Needless to say SimBin are on a roll with their racing titles. It will be interesting to see what they come up with next. Whatever it is I’m sure the high quality of GTR and now GT Legends will remain intact. I’ll be looking for it.