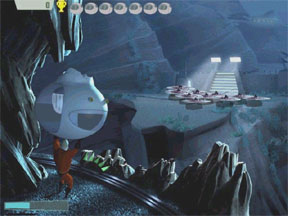 The Incredibles: When
Danger Calls

Movies and games go hand-in-hand these days. Most big release action movies can support a game or two if they tried (though not all"I’m not ready for a ‘Mystery Men’ game. I’m just not.) And many do. But usually one or the other ends up not delivering on its promise.

That’s not the case with ‘The Incredibles: When Danger Calls.’ This one, just like its namesake movie, delivers style, substance and humor in big doses.

The Incredibles: When Danger Calls is a tie-in game, obviously, to the smash Pixar movie of the same name. The game, like the movie, on the surface is for kids but it offers much for the parents of those kids as well.

In the game you have a series of different mini-games that allow the player to be each of the primary characters from the movie and perform heroic (or not"depending) acts.

They’re honestly fun, too. The ‘Violet’ game in which she has to stop her super-powered younger brother from taking her stuff brought out laughs in me as I bonked him with force fields. Big fun. It’s cartoony and absurd but absolutely fun to play.

The game is rated ‘E’ for everyone and the box boasts that it’s appropriate for ages 3+. I play-tested with my four-year old daughter and started off telling her that she could help but I’d probably have to do most of the playing. By the time we were done she was the one handling the controls with confidence and action.

It’s a well-designed game that allows for the smaller set to play.

And the voices! Pixar used the action voice-actors to play the roles in the game. This is good good. GOOD!

They bang their roles here just as well as they did in the movie. The performances are funny and engaging and show real life. The interaction between the two super ‘kids’ is particularly well-done (just like in the movie). Heck, everything about this game screams thought and quality. I can’t imagine a small child who WOULDN’T want to use super-speed to disrupt class. I know I would have.

Let me make this part clear: this is clearly an add-on to the movie-going experience. While the player might enjoy the game as a stand alone experience, it’s going to be much more fun for them if they’ve seen the movie first. To simply see the game in action after the movie is to be drawn back into the magic and live it again.

Nothing gets better than that. The superheroes earn a perfect 5 GiN Gems. And not even a super-villain can contest that score.