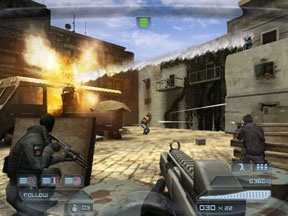 The last news poll I saw had about sixty percent of the people asked saying that terrorism and the fear of it was on their minds at least once a week. Having a job that takes me into the nation’s capital quite often puts me in that group as well. In fact, I think 60 percent is a little low.

So a game where you get to strike back at terrorists is a neat concept.

But don’t think that this is another Doom or even a Half-life. The Rainbow Six series has always been about realism. People running into a room filled with terrorists armed with automatic weapons and thinking you are going to breeze through, pick up a health pack and keep moving are going to quickly learn that you don’t do that in real life or in this game. For one, there are no health packs. And although you are issued some nice body armor, one shot can still kill you sometimes, and more than one shot certainly will.

This realism manifests itself in some interesting ways that some shooter gamers may not be accustomed too. For example, there is no jump key. Jumping up and down in a firefight won’t really help you in real life. As such, the game is great for LAN parties that want a realistic experience.

In fact, I was first exposed to the series many years ago at a LAN party. We had just gotten finished playing Quake III where I got my hat handed to me by a 14-year old kid who was able to jump around so much that I could not hit him with my chaingun shooting in fully automatic mode. Then we switched to the Rainbow series and I put him down more than once using careful tactics and some stealth. I was hooked.

Flash forward to modern day. Thankfully the realism aspects are still included in the game. The graphics have gotten a lot better, though most of the levels don’t really give you the opportunity for sightseeing. They are either just dark holes like a terrorist cave or battleship grey like a prison. Still, they look good for places that are rather nondescript in real life.

There are several single-player missions that seem completely unrelated, but in fact are tied together into a main plot. The overall plot involves a terrorist group that steals a biological weapon called the Legion virus. The virus will kill anyone who is exposed to it and is 100 percent fatal. However, after a few seconds of exposure to the air, the virus will die off. So you can flush an area with it and kill all the people. Then you can safely go in later and take whatever you want. As such, it’s a pretty powerful weapon that should not be in the hands of fanatics with a worldwide political agenda.

The plot is not quite spelled out exactly like that, but instead unfolds over time. It’s not exactly a Hitchcock film, but there are a few "ah-ha" moments.

Much has been made of the fact that one of the Rainbow Six team members is kidnapped in the marketing for this game. However, rescuing them is not much different than saving anyone else, like the president of South Africa who you find huddled in a bank vault in the first mission.

However, you do get to know a lot of your team members this time around. Previously, they were pretty much just voiceless faces that came along on missions with you. Now they talk and you get an idea of their personalities. There is even a team member I hate working with because she gets a bit of an attitude with me when I give her a hold order. As such, I cringe when she is assigned to my team.

Which brings up my biggest problem with the game: the character AI. While the enemies seem to have pretty good AI, taking cover and trying to flank you, your own team is not quite as smart. Many times I will be crouched down firing through a doorway and one of my team will casually walk up and step into my field of fire. Once, my team stood at a corner firing into a wall while a terrorist peeked around the same corner and proceeded to gun them down.

Sometimes your people are fairly smart, looking around corners and scanning for enemies. And when you line them up and have them breech a door to enter a room they do a good job. But other times they are just not what I would call elite warriors. I know what the game is trying to do, but I have seen far better team AI in other titles. First To Fight was a marine combat simulation and the four-man fireteam for that game was spot on most of the time. Here, it’s a good idea to tell your team to hold up when getting into an intersection or other possible ambush site and see what is going on yourself. Otherwise, there is a good chance one of your allies will be killed. So to the woman with the bad attitude, please know that when I tell you to hold up, it’s for your own good.

Once you play a single player mission, its map is unlocked and you can go back through it in "terrorist hunt" mode where you basically are a lone wolf trying to take down a set number of bad guys. This mode is more like a traditional shooter, but one shot can still kill you so you need to be careful. This mode is a lot of fun however, especially if you find a dark area and can activate your night vision. Its great fun when you can see and the terrorists can’t.

While the single player game is fun, at least when you are in the groove or as the A-Team used to say, "got your jazz on" the real strength of this title is multiplayer. Taking on 16 people online is quite a rush. There is a free for all mode but also the more traditional team versus team mode. And the two teams are not exactly carbon copies of each other. Each team has access to different weapons which makes strategies and teamwork a bit different depending on your side. In my online experience, the team with the best tactics normally won the day.

Rainbow Six Lockdown is a realistic simulation of a firefight. If you like your games with a real edge, then Lockdown is the game for you despite some flaws in the AI. And it’s really good when playing online, which will make it a staple at LAN parties for years to come.