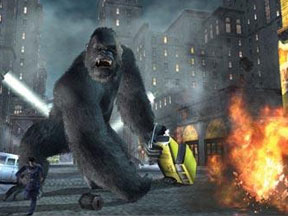 King Kong: The Official
Game of the Movie

With the recent and highly anticipated release of the big-screen hit, "King Kong," on DVD, it would be nearly impossible to not go out and purchase the official game of the movie or even be compelled to dive back into this emotionally-driven action/adventure to satisfy that inner beast you thought you’d forgotten after purchasing it a couple months back. At any rate, having the luxury of owning both the DVD and the game under one roof ultimately leaves room for some casual afterthoughts.

For starters the big-screen movie was a stellar hit raking in 66 million in just its first five days. The Kong legacy is "legend-like" when you think about it. It’s one of those ageless story plots that would probably be mentioned in the same breath as "Jaws" or "Godzilla" that has never become completely dormant and has always managed to be passed from one generation to the next. I was just a kid when the original movie was a TV hit and I thought much of the movie then. But I think I speak for most Kong fans of my generation that seeing the infamous, building scaling, girl-snatching, raptor bashing, guerilla recreated with some of today’s top-notch motion-picture technology was absolutely priceless and brought back a few childhood memories.

Adding the icing to the cake, the release of the DVD version of the Kong marked a record breaking achievement for Univeral Studios. Reports estimate that 6.5 million copies were sold in the first six days that King Kong hit store shelves racking up a whopping 100 million dollars in total sales making it the best-selling DVD for Universal Studios in its initial release.

With all of that said, much credit is due to Ubisoft and company for delivering to the masses of enthusiastic gamers and fans of the movie a title that truly lives up to the hype of the big-screen hit and in it’s own way sets precedents of it’s own.

"King Kong: The Official Movie of the Game" establishes itself as yet another seriously successful "TV-to-platform" hit. Why? Well there are several answers to that question but for starters the game looks fantastic across all platforms, especially on the Xbox360 and PC versions. The world of Kong grabs you by the shoulders and shakes you from the moment you set foot in the game with its very much alive and larger than life environments.

The first impressions of the "Skull Island" stay with you for quite a while. When the game gets underway you find yourself tempting the face of death as you fearfully row your tiny paddle boat through crashing waves and crumbling rock sides to reach the uncertain shores of this massive prehistoric isle. The whole time you’re telling yourself in the back of your mind, "This can’t be a good thing," you can’t help but find a little humor in the hilariously brave and wild antics of co-star and hell-crazed film-maker, "Carl Denham" as he makes sarcastic jokes about the current life-threatening situation happening around him constantly urging and pushing his extremely doubtful crew to not turn back but see this thing through, regardless of the consequences, for the sake of a great film making opportunity and a rather remote possibility of fame and fortune.

There can be no doubt that sound and sound effects play such a tremendous force in this game. If one had to describe the selection of audio for the game in two words, it would have to be "raw" and "untamed." Anyone who’s had the privilege of playing just a few moments of Kong is going to tell you that it’s an experience that gives you an emotional high nearly every time you pick the game up. You can give much of the credit for this experience to the sound department. If you’re one of those gamers with a "stereo" or "surround sound" hook up then there’s no question you’re experiencing the sights and sounds of the game full throttle.

Bringing renowned film producer Peter Jackson on for this project was undoubtedly the smartest move Ubisoft could have made to make Kong the success it is today. There are several successful TV-to-platform titles out there on the market today but Kong clearly sets itself apart from the rest because of how involved Peter Jackson was in this project. Like most of his movies, Peter has a real knack for delivering to his audiences an up close and personal experience like no other. In their brilliance, the Ubisoft/Jackson team was able to create a game that is truly a real adrenaline rush no matter what perspective you play the game from: man or Kong.

It could even be argued which perspective of the game is the most enjoyable. On one hand you play as Jack Driscoll, a fairly well-known playwright in New York, whose been taken on by Carl Denham as scriptwriter for his next film. You find out fast, once you hit the jungle, that none of those professional skills do you a bit of good out in the wild. From Jack’s view you’re constantly at a disadvantage so you have to use your wits and learn to make use of the environment and a scarce supply of fire weapons and objects to help you survive Skull Island.

More times than none you find yourself in hostile encounters with various creatures of the jungle where you’re either out-numbered, out-powered, or out-sized. Shotguns, rifles, spears, and some lethal arsenic fires will most of the time take care of a lot of the smaller beasts of the jungle but as you climb higher up the food chain you’re going to need to use different "bait" tactics like the carcasses of inoffensive creatures such as giant dragonflies, small larvae, swamp crawlers, and pterodactyls to lure the bigger hunters into traps or to create diversions.

In the jungle, situations get thrown at you so fast that a lot of times you only have time to act on your natural survival instincts. There are tons of adrenaline-filled and hair-raising moments where you perform dangerously insane heroics to rescue or keep your team out of danger but none like those of the V-Rex encounters. Overall, what makes Jack Driscoll’s role a blast to play is that ole’ "Indiana Smith" feeling you get once you’ve learned your way around.

On the other hand, playing Kong is purely sadistic. After you’ve been chased and cornered all over the creation, there’s something that turns on inside you when you go from being the "prey" to becoming the "predator." You suddenly feel at home as the jungle becomes your private playground and you yearn for some ill-fortuned beast or beasts to try and come and challenge your role as "King of the Jungle." It’s a lot of fun just navigating around, jumping, walling, swinging, climbing, and lifting or bashing enormous objects or obstacles to reach certain areas. Kong’s small list of combat moves isn’t anything too fancy but they’re definitely raw and barbaric. You can barrage your enemies with a series of basic wild blows as well as deliver a violent shoulder blow to temporarily stun them. When you’re in close quarters you can throw your enemy in any direction after a successful grab or even bite them.

Kong can also grab tree trunks or "megapede" creatures and use them as weapons. Once you’ve weakened your opponent you can end their misery with a "Jaw Break" or "Throw Slam" finish. Additionally, Kong can repel an attacking enemy by swinging upwards and landing a successful blow or catching them in his hands as they lunge for him. Playing the Kong perspective of the game is an incredibly intense experience that will, undoubtedly, leave your inner beast thirsting for more.

If there were to be any real gripes about this game, I would have to agree with most that there wasn’t enough opportunities in the game to play as Kong and that the game was a little on the short side even though it was good to the last drop. Also, even though the game is solid across all systems, if you play the PC version, I think, in terms of control, the button layout is much better on the consoles. If you’re not a "keyboard master" I recommend you pick up a PC compatible joystick. It might make for a more pleasurable game experience.

The bottom line, though, is that "King Kong: The Official Game of the Movie" delivers the total primal experience for any hardcore fans out there. Impressive graphics, a superior and emotionally driven sound engine, and the chance to live the Kong experience through the perspectives of both man and beast make this game an opportunity that should not be passed up. Even if you don’t take my word for it, take in consideration the fact that the renowned Peter Jackson, who brought the phenomenal "Lord of the Rings" series to the big screen, played a vital role in the making of this game. That should say it all right there. Hands down, this game is easily rates 4 1/2 out of 5 possible GiN gems and trust me you haven’t lived until you’ve pounded your chest like a hairy, six-ton guerilla with one serious attitude.