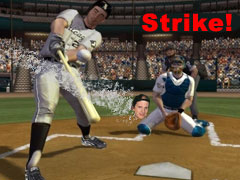 A few weeks ago, I wrote about Sony's release of MLB 06: The Show for PSP. When I was finished, I found it as a worthy alternative to the exclusive MLB 2K6 for PS2, Xbox Classic, and eventually Xbox 360. While I have nothing but praise for Sony's PSP and PS2 first party title, I still decided that in order to be a fair and balanced reporter, that I would give 2K6 a try on the 360.

That, sad to say, turned out to be a mistake.

Everything started up fine, as I was able to jump through the opening movie and access the main menu without a problem. But as I do with every new sports title I play, I immediately access the online mode so I can download the latest rosters. So when I click on the "Xbox Live" option, it goes through a series of prompts and when it says "No VIP Profile detected. Creating," that's when it happens: nothing.

No sound, no stuttering, and when I try to access the Xbox Guide, nothing. My first true 360 lockup. Eventually after five or so tries, I'm able to get my rosters updated, but the problems continue.

Now with an updated roster, my next task was to start a new franchise. I get my rosters updated, and change the lineups and starting rotation to match that of the losing Bucs for this year. All is fine and dandy, until I start Game 1 against the Brewers.

Chris Duffy comes up to the plate, and takes the first pitch for a ball, then swings and misses the following pitch. Pitch three connects, resulting in a base hit, or so I would think. Right then, it happens again: frozen screen.

Frustrated, I start to check Operation Sports, a sports gaming website I use to get AI sliders that match the real players. Upon reading the MLB 2K6 360 forums, there are many listings of other players having lockup issues as well.

One thread came exclusively from 2K's tech support team. It states that they are aware of all the lockup issues that 360 players are having, and that it has something to do with the hard disk drive, and they are working on a solution to the problem.

My question though is how long will this solution take? Frustrated owners of College Hoops 2K6 had to wait a long time for their fix to come out, the last of which actually came out AFTER the Final Four! I really hope that I don't have to wait until the World Series ends to play this game.

But then again, I'm not surprised with Visual Concepts, Kush Games, and 2K Sports (formerly Sega Sports.) The last three outings with the MLB/ESPN series have had trouble. When I played ESPN MLB Baseball (2K4,) the game was incomplete, as it did not have any background music, some of the menus were inconsistent, and overall was a mess.

Eventually it took a replacement disc to fix the problem. Last year's MLB 2K5 really turned me off because of one nasty bug: after getting a base hit, the opposing pitcher ALWAYS threw a wild pitch on the following batter. It was then that I decided to make the defection to EA's MVP series, which really hooked onto me.

And then of course, in retaliation for EA having the NFL as an exclusive, 2K decides to make MLB their exclusive franchise, at least as a 3rd party. And if this is the way they are going to treat MLB fans every year, I don't see why everyone complains about EA. Releasing a buggy, lockup related mess like MLB 2K6 on the 360 is inexcusable.

Of course, I can hear the excuses now. Why don't you just buy a memory unit to play it? Listen, I bought the Xbox 360 PREMIUM PACKAGE! I want to use the HARD DRIVE when I play my games. I'm not going to waste $40 for a memory unit just to be a stopgap until 2K Sports decides to either release a workable patch or give in and perform a nationwide recall on what could eventually become a $60 coaster.

Three days after writing this commentary, I rechecked the 2K Sports website, as well as the MLB 2K6 360 forums. Upon further review, the administrators have posted what they consider a "workaround" to the lockup issue. What needs to be done is upon booting the Xbox 360, you need to boot up three other games to the title screen, and then change discs using the Xbox Guide and the "return to console" function. So, using Project Gotham Racing 3, Oblivion, and Rumble Roses XX, I then booted up MLB 2K6 360. Then you have to spin around three times and repeat Victorian poetry while eating a hardboiled egg.

First impressions were good. I just let the computer simulate the Pirates/Dodgers game I attended last week, and it ran through the full game without any lockups at all. Afterwards I was able to work on a franchise mode, and currently after playing through 16 games, ending with tonight's Pirates/Cardinals blowout (15-0 on my league compared to the real 12-4 Pirates victory,) and there were only two lockups.

While the three disc "workaround" might seem a bit annoying, at least it makes the game playable. In doing so, I hope 2K Sports now takes their time with releasing their patch, as there are some issues, primarily in the fielding, that need to be addressed. 2K does have some good ideas in MLB, such as the swing stick and the realistic feeling pitching interface, and I love the Inside Edge scouting system (helped out a lot against Albert Pujols,) but they still have a long way to go to beat the mighty High Heat of years past.