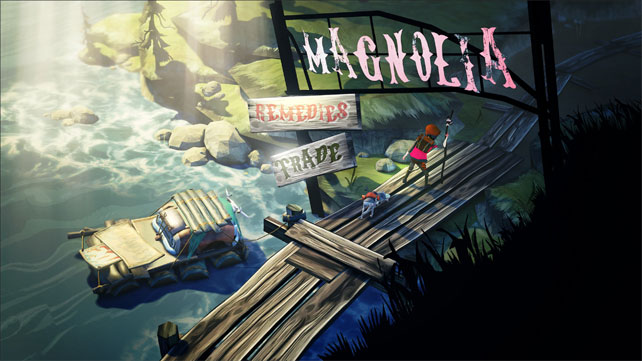 The Flame in the Flood

The Flame in the Flood is an indie survival title by the The Molasses Flood (you’ve got to love any group who uses a bizarre historical tragedy as their company name). I loved the The Flame in the Flood, but I recognize it might not be for everyone. This game is simple to learn but it can be impossible at times thanks to a random generator that can really cause problems.  It also has the occasional glitch, but given the nature of the game, I don’t necessarily see that as a problem. So let’s get into it.

Gameplay involves taking the traveler down a river on a leaky raft in search of resources after a terrible flood. The game starts when your dog Aesop brings you a working radio. Your first task is to try and find high enough ground to get a clear signal, but that’s not really immediately important. The most important thing is to gather all the resources you can so you can survive your journey.

Just like in real life, you need food, clean water, shelter, and sturdy clothes to survive. You start out with basically nothing. I guess it all got washed away in the flood, but you’ve got Aesop, and he’s a great dog. Depending on what randomly generates in that first camp, life on the river will be easier or harder. Mostly harder. Once you’ve gotten everything you can in the first camp, you get on the raft and start down the river and that’s when the game really starts. It’s your job to find resources, craft what you need, and take shelter when you can until you die.

If repetition in a game bothers you, you will hate The Flame in the Flood, because you’re going to have to play it over and over get the hang of it and sometimes you get such crap in the beginning that you have very little chance of surviving for long anyway. You can land your raft somewhere early in the game when you haven’t got any medicine or traps, and you’re killed by a boar. Just like that. Game over.

Then there are runs on the river where everything is going your way. You get randomly generated flint and jerky in the first box you open. You’ve remembered to put high-value resources on Aesop in the previous game, so you start with important items in the next game. I told you he was a good dog. Everything is going your way and you get to explore further than you ever have before.

The environments in The Flame in the Flood are charming and the game is really good at making you think you’ll do just one more run.  There is the occasional glitch. Once or twice I’ve had food I couldn’t cook despite the fact that I had all the necessary items and a fire, but given the nature of the game, the glitches don’t bother me too much, because I’d have likely died soon anyway.

Why do I like this game so much? Well the graphics are charming. There’s a dog. I love a game with a dog, especially when the dog regenerates from game to game with all the goodies you gave him before. I love that part. I also love that this game reminds me a lot of Oregon Trail. If you ever played Oregon Trail you know that despite good planning, good weather, and good decisions, you could still die from dysentery. Just like in real life.

I’m a fan of gaming as a relaxing way to get away from the real world for a while, hence my profound love for the Elder Scrolls games, but there is some part of me that enjoys the pragmatism, maybe even the fatalism of doing the best you can and still dying. I mean that’s life, right? So The Flame in the Flood is a tiny little simulation of life where you’re lucky enough to get a raft and a dog, and that’s pretty great.

The Flame in the Flood earns a perfect 5 GiN Gems for being so amusingly awesome.