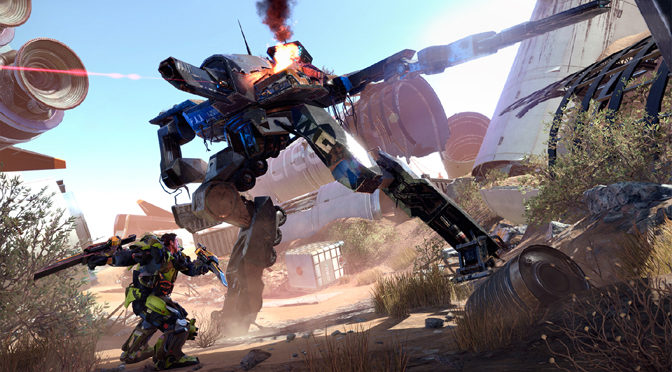 In The Surge, we catch up to a time in the not so distant future where mankind has taken talks of global warming too lightly for too long, bringing about a dark age of long term planetary repercussions. In the midst of a daunting and uncertain future, the largest producer of consumer and industrial products, CREO, embarks on a mission to the right the past wrongs of mankind. They come up with an intense research and development plan to restore the earth back to its former and environmentally friendly state. Sounds okay so far, right?

At some point, deep in their work, however, the focus changes as they decide to branch out into other areas of development, with the ultimate goal to not just change the world, but to save it all together. An aggressive exo-suit program, code-named “Project Resolve,” is initiated to not just make the world strong again but to make mankind strong again…of course, as the old saying goes, “If it sounds too good to be true…it probably is.”

Enter our story’s protagonist who we know only as Warren. Warren has boarded a train headed to CREO Corp to sign up for Project Resolve. He looks to be your average guy but when the train arrives it becomes painfully obvious upon exit the reason why he signed up for the program. Warren is handicapped, permanently confined to a chair. Though we don’t know much about him, it’s not hard to see that his demeanor appears heavy and he desperately wants to walk again, obviously willing to go through any length to do so.

After a brief self-tour, Warren makes his way to the operating room where he is given a choice of exo-suit or “rig” he’d like to be fitted for. Upon selection he is immediately prepped for robotic surgery. However, within moments of being strapped down on the operating table, things begin to take a dramatic turn for the worst as the system malfunctions, failing to administer anesthesia to Warren, leaving him to endure the excruciating and gory fusion of his personal rig to his body. The pain proves to much and he eventually loses consciousness from shock. 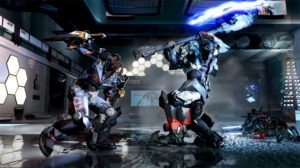 Sometime later he comes to, finding himself in the facility junkyard about to be discarded like old garbage by a robotic labor drone. Without a moment’s hesitation he destroys the drone, realizing the power of his new rig but also his ability to walk again. The moment is short-lived, however, as alarms start going off facility-wide and a massive manhunt for Warren ensues.

[amazon asin=B01NBP3L0M&text=Begin your sci-fi adventure with a copy of The Surge for the PC, PlayStation 4, or an enhanced version for the Xbox One X from Amazon!]

From this point in the game it’s all about wits, survival, and adaptation. You still know very little about CREO at this time, only that they want to erase you like a bad habit. You’re in a strange place completely unaware of your surroundings and more importantly you don’t know what kind of opposition is out there looking to hunt you down and end you. To make matters worse, while your rig is sufficiently functional, the power core that keeps it running was badly damaged during the botched surgical operation and it is slowly beginning to fail. That said, while you might have a lot of questions you’d like answered, you’ve got more than enough reasons to get going ASAP if you’re gonna have any chance at surviving the current situation.

Right from jump, you’re going to notice that while having your own rig is cool, navigational movement as well as offensive and defensive tactics will feel a bit clunky at first. Initially, your combat arsenal will consist of a series of basic horizontal and vertical attacks. While these types of strikes are effective out of the gate it won’t be long before you realize the need to adapt. 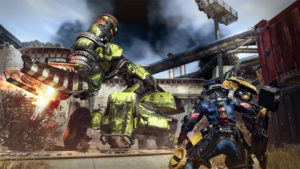 For starters, while its fun and feels powerful to throw flurries of hay-maker swings at foes, you’re more than often left vulnerable in between attacks leaving you susceptible to incoming strikes and other types of counter tactics. In addition, most of your enemies will be equally heavily armored and won’t go down so easily during a fight.

One of the true shining traits of this game is its incredibly adaptive combat system. Early on, you will learn how to target enemy weak points and take advantage of flaws such as exposed limbs. Focusing attacks on your opponent’s weak points will deliver devastating damage making quick work of their defenses. Unleashing well-timed combos will leave enemies momentarily stunned and can lead to lethal execution moves severing limbs and various rig and body parts in the wake. As bonus, Warren will be able to salvage these severed parts and fuse them to his own rig later, increasing armor class and broadening his range of melee attacks. 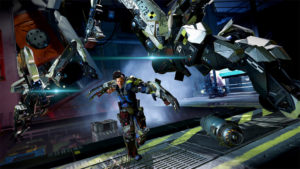 Warren’s path to freedom will become increasingly difficult with every advance pitting him against stronger more tactical enemies and powerful area bosses. You’ll need to keep your wits about you, sticking to your training, pooling resources and choosing your battles carefully if you’re going to get him thru this ordeal.

Along the way, you’ll reach lab checkpoints. These areas are the only place you can save your progress, boost the power core of your rig, as well as swap out or upgrade it using mechanical parts and tech materials acquired out in the field. 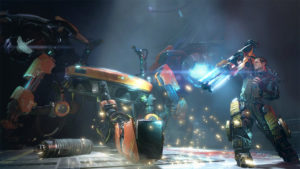 It should be noted that this game can be extraordinarily challenging at times and brutally unforgiving when it comes to survival. If you die anywhere outside the lab, you will lose all current progress, drop all recently acquired inventory, including components and tech materials at your death location, and respawn at the nearest, recently discovered lab checkpoint. You will then be given a brief window of time to recollect your lost inventory from the spot of your death, but be quick as your belongings will either despawn after the expired time limit or if you die in the process of trying to get back to them. In addition, anytime you return to the lab for any reason, whether you die or not, all enemies in the surrounding area, outside of area bosses you have conquered, will respawn. Cheers and happy hunting. 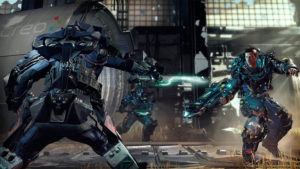 Despite it’s challenging aspect, the overall gameplay experience can become quite addicting over time provoking you to master your combat skills and relentlessly progress onward from one area to the next despite obstacles at every corner. If you happen to be a fan of the Dark Soul series, you won’t be disappointed here.

Currently there are three expansions out for the game: “Walk In The Park,” “Fire and Ice,” and “Special Employee.” Between these three DLCs you’re going to get access to a special new rig, ten all-new high-tech weapons, and access to a brand new expansion area. All the DLCs are respectably priced and really help to add to your collective gaming experience. 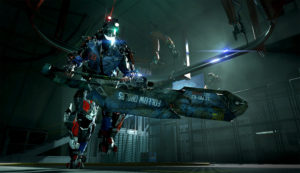 The Surge is a solid and well-rounded action adventure. Its combat engine is both respectable and highly addictive. The game has lots of replay value. It’s easily one of the most challenging and immersive titles we’ve seen in a while, and it looks amazing in 4k resolution via the Xbox One X. For these reasons, this one easily racks up a solid 4 GiN gems.