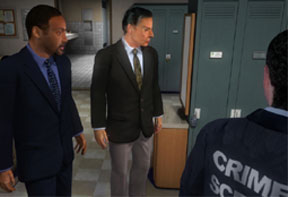 It was with great sadness that we learned of the death of actor Jerry Orbach. The veteran actor starred in many movies, television shows and even Broadway theater productions. Just a few weeks ago he said he was beating the cancer he was battling, and even started work on a new Law and Order spin-off show. So it was a shock to learn of his sudden death the other week.

We sat down to review Law and Order: Justice is Served, a computer game based on the hit show that stars Orbach as his law and order character Lennie Briscoe. Like the show, Orbach does an excellent job here and really helps to make the game fun and enjoyable. It is some of his best work, at least in the video game world.

The newest Law and Order game finds detectives Lennie Briscoe and Ed Green, voiced by actors from the show Jerry Orbach and Jesse L. Martin respectively at the U.S. Open, where a beautiful up-and-coming tennis star is found dead in her locker room. At first it looks like Elena Kusarova took a nasty accidental fall, but your sharp detective work will soon determine otherwise.

Like other games in the series, and like the television show, the first half centers on the detectives gathering clues and the second part follows the trial, headed by district attorney Serena Southerlyn, played by Elisabeth RÃƒÂ¶hm.

You have to interview witnesses and choose the right dialog paths to get responses that help your case, snoop around the crime scene and other places to find clues that can be analyzed in the lab, and travel around to the right locations within New York to investigate your case.

The trial phase of the game has you doing some last-minute investigation work, and trying to follow court procedure to your best advantage, like objecting properly if the defense attorney asks a question that is out of line. It would be good training for a law student.

The game features an excellent plot that would rival a Hitchcock film. Clues that look like extremely obvious ones turn out to be red herrings, while seemingly innocuous ones can make or break your case if you research and play them out right.

Unlike previous games in the series, Justice is Served could properly be called a full puzzle game as well as an adventure title. There are a diverse set of puzzles to keep you guessing, like listening to a parrot sing and then walking across the room and trying to play the tune on a musical lockbox. Apparently the parrot heard the tune enough that it is able to repeat it. You just have to keep it in your head long enough to play the song on a small keyboard.

Another interesting puzzle involves shifting boxes around in such a way that it clears a path for your investigator.

The entire time Orbach and his crew give their quips. When Orbach finds a pair of high heel shoes belonging to the very tall victim, he says "I was never much for dating Amazons." His extreme sarcasm actually makes his character very likable as well as believable as a hardcore New York detective.

The graphics in the game are good, if a bit dated with the interface. You basically click to move around a slide show of different areas. This seems a bit out of place in this new fully-3D world we now live in, but serves to keep the game simple enough for newer players and non-traditional gamers.

As a bonus, the game ships with Dead on The Money, which was the first game based on the Law & Order show.

Given the death of Orbach and the fact that it was recently announced that the show would continue, it is likely that the next game in the series will feature actor Dennis Farina, who recently joined the show – perhaps as a replacement for Orbach. Farina is one of my favorite actors of all time going all the way back to his role in Crime Story (one of the cop best shows ever if you ask me) and I am sure he will do a fine job. He has some pretty big shoes to fill however, because Orbach was a legend.

Justice is Served earns 4 + GiN Gems for being an enjoyable way to spend an afternoon and a way to experience Orbach’s greatness one last time.