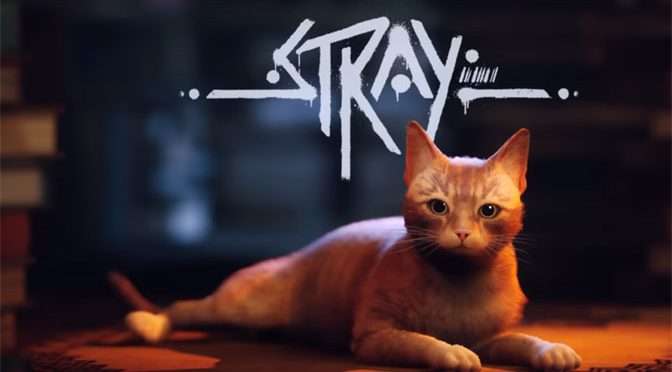 Stray began life as “HK Project,” when the general concept was to develop a platformer featuring a cat navigating Hong Kong’s labyrinthine streets. That idea garnered enough attention that over time, the idea morphed into a much more complex story set in a cyberpunk world, but the main idea, that players navigated the world as a cat, remained. Thus, Stray became something more than the visually stunning platformer we were initially promised and evolved into a heartwarming game by cat-people for cat-people. 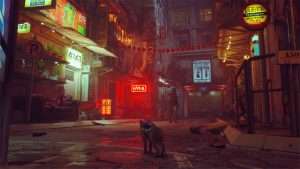 Stray begins with you playing an unnamed orange tabby who lives in a colony of four in a lovely, green world of fresh water with the only implication that another intelligence occupies the world being semi-ruined pipe systems and walkways. You and your feline family bed down on flattened cardboard boxes, snuggle, and joyfully flit from platform to platform until one of the rusty pipes finally gives out under your negligible weight, sending you plummeting into darkness. Your poor family can do nothing but watch you disappear into the blackness. You finally hit rock bottom—only barely metaphorically—and it then becomes up to you to navigate through this strange, barren world to return to your home and colony. 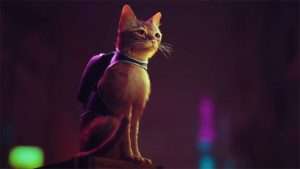 While your goal here is simple: return home, you become embroiled in a deeply political conflict between factions of the only entities remaining in the city. These are robots who, originally created to serve as helpers for humans, have outlived their makers and are now going about their existence, caught in a mockery of the world they inhabited before humanity’s extinction. The Companions, as they identify themselves, now live in a police-state, and the darker nature of their society shows up as soon as you hit Midtown where you begin to see police robots hassling other civilian robots. There’s also a faction that believes that a Blue Sky is not a myth but a reality, and they dedicate themselves to this idea with a religious zeal that would make their makers proud. 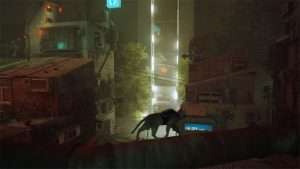 Your goal is still to make it through the various levels of the city, and make no mistake, this is a city constructed on a vertical axis. As you move up, you move up in terms of power, resources, and prestige. The world in Stray bears the moniker “Dead City,” and it’s accurate. You dodge the remains of robots and encounter some that are dying, and the only comfort you can offer them is to nuzzle them in their final moments. Among the robotic corpses left to lie where they collapse, you eventually encounter a flying drone named B-12 that seeks to help a group of these robots Companions, dubbed the Outsiders, find a way to leave the Dead City and explore the outside world. B-12 gives you a backpack that both recharges his battery and serves as a Bag of Holding for the two adventurers.

In addition to the unfortunate hierarchy that has evolved in the wake of humanity’s end, the Companions are plagued by the Zurk. Humans created the Zurk to eliminate waste, mostly by consuming it, but in the years since, the Zurk have evolved to consume anything, including metal. Thus, if they’re willing to consume a Companion, a small orange tabby represents a more than enticing snack. You’ll have to outrun, dodge, and meow them off your body as you race down in-game gauntlets.

The City as Cat Tree 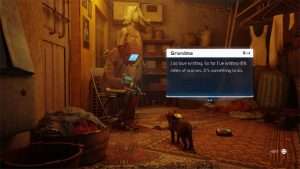 The Dead City is a true dystopia, and without the conceit of playing a cat, Stray could have become bogged down in its attempt at making a critique. Given that the devs initially intended the game to take place in Hong Kong, there’s a pretty clear critique being made here. From the moment you land in the Dead City’s sewer, you’re under surveillance. Even when nothing moves, the cameras do, and as you move higher up in the Dead City, the constant surveillance only intensifies.

Visually, the game intentionally evokes the Kowloon Walled City (Kowloon Walled City – Wikipedia), an area in Hong Kong that started out life as a medieval military fortress and died a densely populated slum in 1994. At its most densely populated, the 6.4 acre footprint housed some 50,000 residents. The game strives to capture that claustrophobic sense in its design, and I’d argue that it succeeds. Even taking into account that you play a cat, the alleyways in the Dead City feel as small as the 6 foot wide alleyways in the Kowloon Walled City must have. 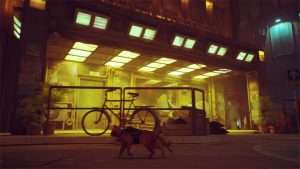 More interestingly, however, the Kowloon Walled City represented a Chinese foothold in British-governed Hong Kong. Both China and Britain claimed ownership over the city, but neither government intervened in its day-to-day affairs. As a result, questions of jurisdiction meant that there was very little police presence in the area, allowing gangs to exert a stranglehold on the city. This sense of being a “no-man’s land” makes the city a perfect setting for the story Stray wants to tell. As a cat, you exist in this grey area within the Dead City’s structures. You’re neither citizen nor tool, which makes you a true outsider in the political fight that’s brewing.

That fight reflects the reality of many citizens living in Hong Kong. Unrest in the city has resulted in crackdowns by the Chinese government, and ex-pats are fleeing the city in unprecedented numbers. Stray doesn’t engage with Hong Kong’s current woes because while they’re borrowing the Hong Kong setting, they’re more interested in telling a story about change.

Batting Around the Yarn Ball 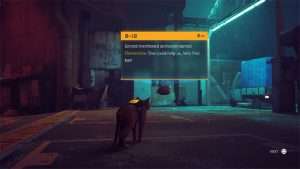 Your cat character is a perfect outsider for this narrative as well. There’s nothing particularly special about your orange tabby beyond the qualities that make every cat special. As a result, the game isn’t focused on teaching your character anything. As the eponymous stray, you watch events unfold with a certain amount of remove even as you interact with the Companion characters by performing various tasks. Interestingly, the game only rarely acknowledges that you’re actually a stray cat because the Companions interact with you as if you’re just a differently shaped robot, which given their collective experience, makes a certain amount of sense. The only biological entities they encounter are the Zurk, and the cat shares little in common with those creatures.

It’s very, very clear that the developers have paid a great deal of attention to cats in real life. They’ve done a decent job of replicating feline movement in the game, though there’s something missing. The cat is a bit too stiff, and even during some of the cut sequences, the movement comes off as very jerky. However, these issues are minor, especially when taken against all the wonderful touches the game offers. You have a dedicated meow button, which you use later to shake off the Zurk. You can scratch every rug, and the Dead City is replete with objects left dangerously close to edges. How can you not give in to your baser feline urges and knock them off? In fact, you should. There’s an achievement for that. 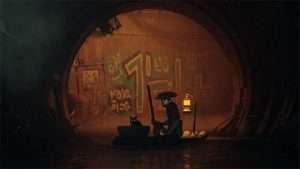 You’ll find that you can also nuzzle Companions, and when you do, their CRT faces will register a pixelated heart, which is charming. You also get the opportunity to take well-earned naps, resulting in the camera moving to capture a moment of perfect peace. However, these moments only serve to highlight what’s going on in the rest of the Dead City. Sometimes, your nuzzle is the last experience a Companion has before death. Other times, you get to take a catnap after dodging Zurk or security guards. Stray strikes a unique and beautiful balance between the almost suffocating atmosphere of the Dead City and the simple pleasure of being a cat.

The game also finds a way to juggle being both a platformer and an adventure game. Given the nature of the Dead City, yes, you do spend a great deal of time jumping from pipe to roof to random air conditioning unit, and occasionally, you’ll need to solve puzzles that involve outsmarting security robots. There’s even an achievement for simulating a mah-jong game, but you’re mostly in it for the story and also the meow button. That said, many platformers fail to capture the skill level your character actually should have, even if you as the player lack it. Stray doesn’t take that approach. It’s difficult though not impossible to fall off the platform because you’re a cat that’s been jumping like this his entire life. Rather than feeling like the developers have made the game easier, I found that the smoothness of the jumps actually contributed to the depths of my immersion in it. 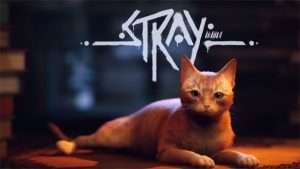 The game contains a screen that recommends playing with a game pad, and boy, howdy, would that have made things easier. I found Stray’s keyboard controls to be awkward, especially if you’re trying to move forward (W) at a run (left shift) while meowing on command (left alt). The resulting placement ends up being a bit awkward, though your mouse does offer some limited directional control. The awkwardness isn’t a deal breaker as it mostly only manifests when you’re trying to escape Zurk mobs. These gauntlets only manifest rarely, but when they do, it’s incredibly frustrating, especially given the rest of the gameplay.

You don’t get a weapon, even though theoretically your claws could be one, until you’re mostly through the game. That weapon isn’t exactly useful either because it has a pretty long recharge period. Most of the game emphasizes your ability to sneak through small spaces and avoid being noticed, which is right in your wheelhouse as a cat.

Stray is also a fairly short game. A full run-through should last around six or so hours, and some players might balk at paying $30.00 for such a short game, but please, let me assure you, you’ll find a richness and depth to the world of Stray that more than justifies its price tag. 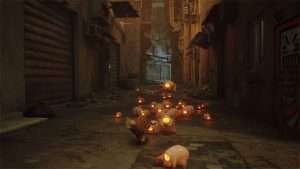 Even at six hours, Stray’s story is well-told and mostly satisfying. As you progress, you uncover information about the Zurk—that they were created from bacteria as a method of waste-disposal. However, over time, they’ve evolved into something very different. You discover that the Companions were actually robot companions to the human survivors of whatever disaster drove the population into a walled city in the first place. However, after their makers died, the robots began to evolve, almost mimicking their masters. Companions squabble amongst themselves, create graffiti, and generally try to go about what even we would recognize as normal lives. 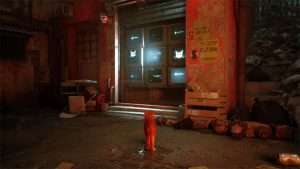 The biggest reveal—and please mind the spoiler warning here—is that B-12 is neither just a drone nor fully a Companion. As the engineers who constructed the Dead City began to die, one of their number discovered how to upload actual consciousnesses to the internet, but again, as time marched on, the person eventually forgot they were a person and instead believed themselves to be a Companion. Something in B-12 recognizes the cat, which is why B-12 tries to guide the cat to find it, using an adorable mix of electric arrows coupled with a cat symbol. The game from then on is largely about a process of becoming. For B-12, that’s learning about the consciousness. For the Companions, it’s about learning to leave behind the trappings of a human society that didn’t survive. 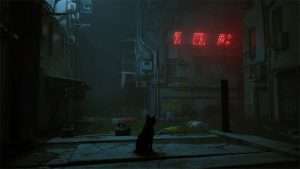 Stray ends on an ambiguous note, which is a touch unsatisfying, but it’s not so unsatisfying as to sour the gameplay experience. While Stray isn’t really giving us a new spin on cyberpunk or platforming, it’s a fantastically well thought out adventure. Plus, there’s something magical about getting to spend a few hours as a cat; the game will give you a new perspective on scratching rugs.