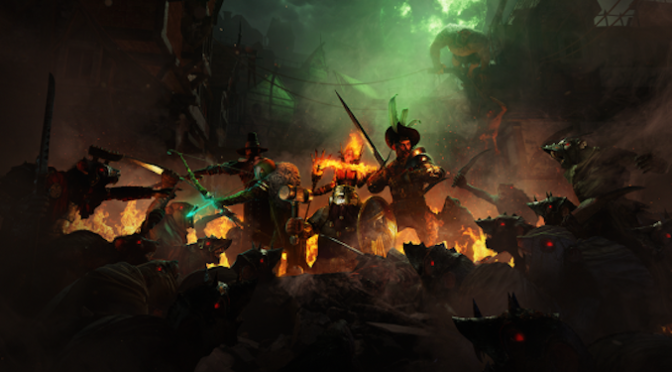 In the past, I have played several Warhammer games on the PC, this however is my first console Warhammer and I was pleasantly surprised. All previous games in the Warhammer universe that I have played have been Real Time Strategy games. Vermintide felt like a completely new Warhammer experience, because this game is a first person shooter and melee game. It is also a cooperative action game where you team up with up to four other players to complete missions.

Although this was played on the PlayStation 4, Warhammer: End Times- Vermintide has been available to PC gamers since October 2015 and recently released for both Xbox One and PS4. This review was done on PlayStation 4.  As a big fan of first person shooters what really drew me into the game was the use of melee. Switching back and forth between ranged weapons and melee was fluid and offered advantages to the gameplay. It’s also just fun to go around slashing enemies with swords, daggers, and hammers, plus you get really cool hats. After all you do need a good hat to shoot and slash your way through giant ugly rat creatures.

Warhammer: Endtimes- Vermintide by Fatshark is a game that takes place during the End Times in Warhammer lore. All the missions take place in and around the city of Ubersreik. Characters and places are taken from the Warhammer universe. According to Warhammer lore, the city of Ubersreik is a town in Reikland, an imperial province in the Empire of Man. In the game, Ubersreik is overrun by the Skaven army, man sized humanoid rat creatures who have invaded the empire on an apocalyptic scale. It is up to five unlikely heroes to stop the invasion and save the Empire and its citizens. Our heroes consist of humans, a wizard, dwarf, and an elf.   The weapons and style of the characters remind me more of late 16th century Europe with a Gothic feel to the scenery. Very dark and foreboding with the sense that the apocalypse has fallen upon the world.   It’s up to our heroes to stop the progression of the End Times.

When entering the game players get to choose a hero. In this game its best not to get too attached to a specific character, which is advice I need to adhere to, as you may not be able to play him or her in each mission. As this is a co-op you will be sent to a mission with other players. Only five players are allowed in each mission and are assigned a hero. Each hero can only be chosen once. Unless you do a private match with friends then you are guaranteed a hero.

So you can’t have two Waywatchers or dwarf Rangers fighting in the same mission. This just adds to the realism of the game.   Our five heroes for this game are Victor Saltzpyre the Witch Hunter, and my personal favorite. He starts out with dual flintlock pistols and the Templar Rapier. The Bright Wizard who is devouted to pyromancy Sienna Fuegonasus. Her ranged weapon is a staff that shoots fireballs and a mace as her melee weapon. The Dwarf Ranger Bardin Goreksson has a great axe and crossbow at the ready. A wood elf the Waywatcher Kerillian. Two types of weapons that she can possess are dual daggers and bow. Finally our fifth hero is the Empire Soldier, my alternative hero, Markus Kruber. Markus first weapons are the White Wolfhammer, a battle hammer, and the Coach Gun Blunderbuss which fires a hail of shots at ranged and close quarters.

After you select your preferred hero, you will be transported to the Red Moon Inn. Here there is a table to select a mission. Around the room are areas where players can check their inventory, gather ammunition if needed, and craft and upgrade weaponry and gear.

In the inventory you can pick your head gear, ranged and melee weapons, and compare stats. You can also select trinkets that give boosts to your characters. The forge is where players can craft new weapons. To acquire new weapons you must fuse together five items already available in your inventory. These can all come from different heroes. There are also selections for upgrading and breaking down weapons for salvage. You are able to only work on items not equipped by your heroes. All heroes are available through the inventory and forge to customize them before mission start.

Back at the central mission table a player can chose a quick game, which is what I have been doing or do a custom game. The custom game is the story progression and you need to do Horn of Magnus before unlocking any other maps. A quick game picks a random map and pairs you with random players.  In the custom game you can be matched with players in a public match or set up a private match with friends. There are also two modes, Adventure that is the normal co-op game and Last Stand. This is a survival mode and you must defeat waves of Skaven hordes.

If you chose a quick game it will match you with a new game or one already in progress. If you end up in a current mission be prepared to slash Skaven at spawning. They are relentless in this game.  The matchmaking in this game is very good, and you do have the option of continuing to search for missions if you desire a better game or want to play a certain hero. Like the  Witch Hunter. He is a good character who I get the sense is more of the leader of the group and takes command plus he has dual pistols and some nice gear.

Some of the missions you will play in the first levels of the game are the Horn of Magnus and the Dungeon.   In Horn of Magnus players need to get to the tower and sound the alarm to the Skaven invasion. This is actually the first mission and each mission after progresses through the story. Even though it is the first mission, getting defeated doesn’t mean you are stuck playing it over and over again till a victory. You can have other missions available at the Inn that coincide with your current level in the game. The Dungeon is clearing out the Skaven from the city’s dungeons. Here there are areas that are completely dark making it very challenging to combat the Skaven army if you lose your torch.

Throughout missions you can acquire tomes. These up your chances of getting rewards at the end of a mission. At the end of the mission you get a dice that when rolled can unlock new items.  Tomes increase your chances of getting rewards on the dice roll if you carry the tome till the end. Besides tomes, players open chests throughout the game and grab potions and other items. Potions can heal, and increase speed and strength. Bombs are also available throughout the map as well as extra ammo. Look everywhere to gather important items that aid in your quest.

The gameplay is not much different from other first person shooters. You do have to learn the basics of combat and how to block and switch between weapons. There is also the use of potions, health packs and bombs but everything is covered in the tutorial. It’s a decent tutorial that shows you how to play the game. The missions are more in the style of raids; you have an enemy, goal, and collectables with rewards. Missions are playable again and at the end of a mission players get to vote for the next map. All players vote to continue or you can just leave the game.

It’s a challenging game, as you have to revive members of your group or risk defeat, there is no respawning. This is also a game focused on teamwork and members should not get separated or you end up tied up or being beaten by rats and no one to help you. Work as a team to accomplish the goal and be rewarded.

The enemy seems pretty easy to take out; even the armored rats are not much of a challenge. Rat ogres take the team to kill but individually most are not much of a threat. The poison rats must be taken out before they explode and there are rats that have machine guns. However, as individuals they are not much of a foe but they don’t come as one, they come as many. Your team can easily be overrun with Skaven. Just keep shooting and slashing, drink potions, and try to keep your team alive, especially if you are in an area with little escape.

Some of the best parts of the game not related to the gameplay are the art and costumes.  The city looks like it has been through hell and modeled to give a dark and dead feel.   As for the Skaven, they are made to be hideous beasts sent to destroy the Empire and a well designed evil that our heroes must stop.  They are after all nightmarish red-eyed giant rats with military prowess.  With stunning visuals the game makes you feel as if you have entered the apocalypse of the Warhammer world. Also, the costumes are creative and nicely distinguish the skills of our heroes.

Vermintide is a fun co-op adventure that can prove a challenge when confronted with hordes of Skaven. It’s not a game for everybody as there is gore and you see the rats being slashed and blown to pieces. Lots of blood, rat blood, so if you are not fond of rats or gory stuff this is not your game. If you are over 17 and like me don’t mind hack and slash games this is a great game to play. So get some friends together or join a game and have fun slaying the rat armies of the apocalypse.