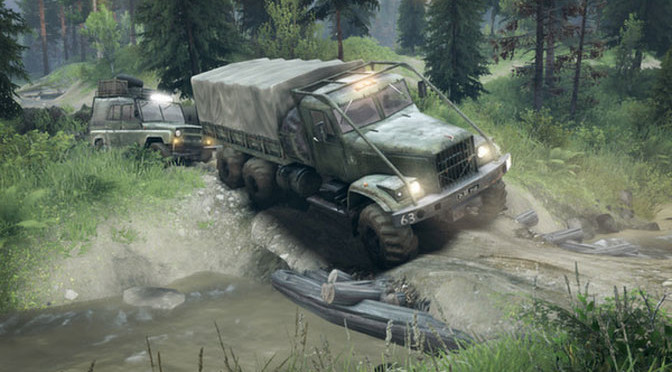 Spintires is one of the most difficult simulations you will ever love.

The game (which is made up of the words spin and tires mashed together) takes place deep in the Russian heartland. You play the role of a Siberian lumber worker, tasked with transporting cut logs out of deplorable conditions that no vehicle should ever have to traverse. Your weapons to make this work are an arsenal of Soviet-era trucks and vehicles that would look just as home on the battlefield as they do running through the forest in Spintires.

When I first downloaded the game from Steam, I was kind of expecting the standard Americanized type of off-road simulation. You know the type: you load up the jeep and drive down the beach with one hand around a girl making insane jumps and drawing patterns in the dirt or sand. Even popular games like Grand Theft Auto V feature off-road challenges, so I thought I would be ready for it. Well, forget about that. Spintires is incredibly difficult. The game is still a lot of fun, but it’s a different kind of fun that comes from surmounting and conquering an impossible situation.

In Spintires, all the roads appear to be made of six to ten foot deep trenches filled with wet oatmeal. Moving a 10-ton vehicle through that mess is an exercise in frustration. When I first started playing, my little Type A UAZ 469 scout jeep barely made it out of the garage before it was hopelessly stuck in the mud. Even going flat out, I was only up to about five miles an hour as I slid and spun through miles of deep muddy slush. In fact, going completely off road was easier, had it not been for all the rocks and trees blocking the path.

I honestly thought that there was no way conditions could be this bad in the real world. However, a little bit of research and I found out that yes, Soviet lumberjacks actually do traverse conditions like this – with a full load of logs no less.

So now that I was convinced that this was actually a simulation, and that people really do drive in these conditions in the real world, I redoubled my efforts and really started to enjoy the game a lot more. Most of the vehicles in the game have settings that can help them get along better. Some have all wheel drive and most have winches that can be equipped to drag them out of stuck spots. There are even a couple trucks like the massive eight-wheeled Maz 537 and the even bigger Maz 7310 that are specifically designed to rescue other trucks that have flipped over, stalled out in a river or otherwise become incapacitated.

The game is cleverly designed. The goal is to transport a certain amount of lumber out of the woods on one of several maps, each with their own unique challenges like deep rivers that need to be forded, steep hills or especially dense or rocky terrain. There are garages along the way that you need to find too. These safe houses act as save points for the level, and also unlock new vehicles. This way, some of the smaller trucks like the little scout jeep are still important in the game because they can be used to find and unlock the rare oases of safety. I assume this also gives the workers the ability to grab a hot meal and take a much needed shower, though that is just in my own mind.

The trucks unlocked at the garages act as extra lives if you want to think of it that way. If you flip your first and only truck before unlocking anything else, the game is over. If however you have obtained a fleet of vehicles, then you can send another truck out to try and rescue it.

In addition to getting stuck, there are other dangers that need to be overcome. Trucks can only take so much damage before they give up the ghost. And driving around such huge vehicles in such bad conditions also consumes a lot of fuel. Running out of fuel is a real danger. And, a realistic day and night cycle means that many of these dangers are enhanced, especially at night when it’s difficult to see the right path you want to follow.

To combat some of those problems, trucks can be equipped with a variety of add-ons to make things a bit easier. These include items like a portable garage module for field repairs, cranes to help flipped trucks or to grab logs and giant fuel tanks that can be lugged along to fill up vehicles out on the job.

That brings us to the multiplayer aspects of the game, which are actually quite strong. When I was playing alone, I felt kind of frustrated because I was forced to do everything myself. If a vehicle got stuck or took a lot of damage, I had to drive out with another vehicle to try and fix the situation. That is where multiplayer can be a real lifesaver, lowering the difficulty and making the experience much more fun.

With multiplayer, you can become part of a real team. One of the best sessions I had was with four players and we each took on a different aspect of the logging. One guy drove a crane truck, one had a portable garage modification, one was configured for transporting the logs and one guy drove a fuel truck which allowed us to make deep penetrations into the forest.

When the log transport truck flipped over trying to navigate a sharp S-turn at the bottom of a long hill, we all worked together to flip him back over, get the repairs made and get rolling again. It was a lot of fun talking about the problem with other players, trying a few things and eventually succeeding in getting our convoy back on the road – such that it was.

By the end of the day we had taken most of the logs out of the forest for that map. And it felt like a full day of real work too, though it was quite fun being part of a cooperative team and knowing that others could depend on me to help out when needed. If you plan to play Spintires, I would highly recommend getting familiar with the trucks, their capacities and capabilities on your own. But then when you feel you are ready and competent, go online and become part of a good team. I doubt the real Siberian loggers could do much without support, so it’s a nice addition to the simulation.

Spintires is a great simulation for those who find that most of the off-road games out there now are too easy or too unrealistic. The learning curve is purposely pretty steep, just like some of the hills you will need to traverse. But mastering this game bestows a real sense of accomplishment beyond just the Steam trophies you can earn. That, and the ability to drive some of the biggest and baddest vehicles ever created through terrain that would sink almost everything else, makes Spintires a worthy challenge. It earns a respectable 4 GiN Gems. Don’t get stuck in the mud out there, comrade!