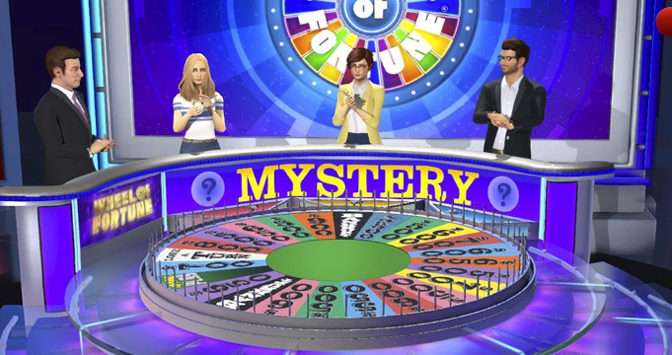 Wheel of Fortune and Jeopardy!

Seeing Wheel of Fortune and Jeopardy in videogame form is nothing new. Back in the day I played Wheel of Fortune on my old IBM PC. The graphics were traditional for that era, only consisting of four colors, but the basic premise of the game was the same as the television show, and the many versions of the game, official and unofficial, that came after it. Jeopardy has never been quite as popular, but has also been represented in quite a few games over the years.

Now, you all know how Wheel of Fortune and Jeopardy work, so I won’t bother explaining too much how the mechanics of the core game function. In Wheel, you spin the wheel and then guess at letters, winning money if they are in the puzzle, which is basically a giant game of hangman. Jeopardy has a bank of answers, and tasks players with coming up with the question. It’s a clever gimmick, but boils down to basically a trivia game. Watch either show on TV if you have never done so, and you will learn the rules in about five minutes. 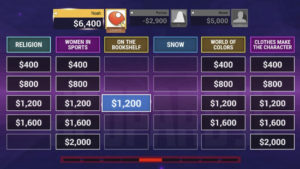 The latest offering from Ubisoft puts both games together on one disk. On the PlayStation 4 where the game was tested, it’s also available for the Xbox One, both games exist as separate entities from the main menu, but both require the disk to play. Having the disk in place is likely more of a copy protection scheme, since both games copy a huge amount of information to the hard drive before you can play them.

It’s interesting to note that both titles are attached to the Ubisoft club, which is the same for all their titles including Ghost Recon Wildlands and the FarCry series. As such, completing actions in the game earns coins that can be spent on in-game gear. Yes, you can rack up points with Jeopardy and then use them to buy a new sword in Assassin’s Creed: Origins if you want. There are also several things you can buy for the games, though mostly for Wheel of Fortune, including player outfits and interesting backgrounds and studio sets. All of this is available for online currency through the club.

Pick up both Wheel of Fortune and Jeopardy! on a single disk from Amazon, and get ready for a wild weekend!

Unlike other games, I have not seen any cross promotional items, so you won’t be donning a Wheel Watcher t-shirt in Watchdogs or a Jeopardy boonies hat in Wildlands, though that would be kind of funny if it were added.

Of the two games, Wheel of Fortune seems to have more customization options, and is overall more fleshed out as a game than Jeopardy, which seems more bare bones. In wheel, you can customize your character, adding suit jackets for the two men and various skirts and shoes for the two female choices. My wife, who loves to play both games, but especially Wheel, tells me she is somewhat disappointed that there are not more choices for female wardrobes, and that most of the good unlocks that are earned as you play, go to the male characters. 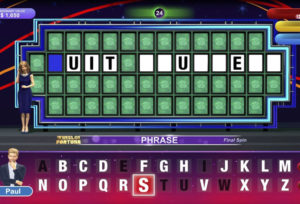 It’s also worth noting that while Ubisoft obviously has the licenses for both games, that none of the stars make appearances. Pat and Vanna from Wheel are represented by generic-looking hosts. Vanna never says anything at all, and the Pat character has a good voice, but little inflection or humor. You can however dress them both up, though like with the players, the male character has quite a few more outfits to choose from. Over on Jeopardy, there is no Alex Trebek or even a character that looks like him. There is just a pleasant female voice who reads the answers and then cheers slightly when contestants provide the correct questions.

Back to Wheel, there is a lot of color and the sets look really good, with new ones unlockable as you earn more money. They add a lot of flavor to the game. For example, choosing the national parks studio set puts a beautiful stream running behind the contestants on the big screen, while choosing a film motif shows a distant shot of busy downtown Los Angeles. There are even videos that play when you win certain prizes like trips, and most of the larger prizes on the wheel are configurable 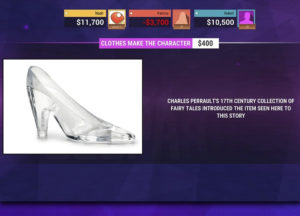 The sound effects are perfect, from the spinning wheel to the final spin warning, to the ringing that occurs when you guess a correct letter. Unfortunately, the host only knows a handful of sayings, which quickly seems like a loop after only a few tries.

There are a lot of puzzles. We have played up to about level 34 at this point (you earn a new level for every so many thousands of dollars earned) and a puzzle has never repeated.

There are two different ways to play Wheel of Fortune, with one to three players locally, or online against real people. In either case, empty slots are taken up by NPCs with good AI, though they are not nearly as challenging as good, human players. Online, finding players might be hit or miss. At peak times, we were only waiting around about 15 seconds to drop into a full game. Sometimes however, the wait was much longer, or no matches were found. This might be a clue that there is a smaller online player base, or perhaps everyone is simply playing the game locally. 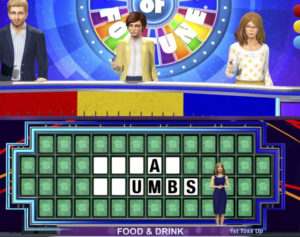 As mentioned before, Jeopardy seems a bit more stripped down than Wheel. Though totally functional, there are few customization options, and no “in-studio” feeling. Its basically looking at the board and zooming in to each block to hear the announcer read the question. Your icon for the game is whatever your PlayStation ID happens to be.

That said, Jeopardy games are fast paced, and very competitive online against up to three people, though depending on your local friends, the sitting-around-the-television version might be just as cut throat. Like in the real game, you have to listen to the whole question before you buzz in, or else you lock yourself out of being able to ring in for a few seconds. This takes some getting used to, and makes the moment the buttons become active quite exciting.

Unlike Wheel, we did see some repeat categories in Jeopardy, sometimes only a game or two apart. Online, we suspect that the best players who have maxed out at level 40 have likely already seen most of the categories at least once before, making the game for them more one of memory than trivia. It would be nice if Ubisoft would periodically add new categories to the game as a free DLC or something, which would really endear them to the community, and likely support the game more than anything else. 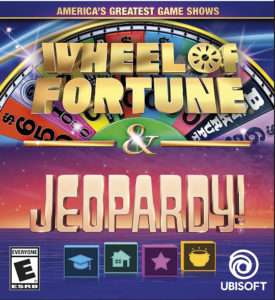 Sadly, as with Wheel, finding people to play Jeopardy with online was sometimes impossible. The game does offer to drop you into a game “in progress” if it finds one, with you taking on the role of an AI player in an ongoing game. That’s better than nothing, but most likely you will find yourself several thousand dollars behind the leaders with little time till the final round.

In the end, this iteration of the videogame version of both Jeopardy and Wheel of Fortune is some of the best we have seen in years. It’s still a little bit flawed, and has that “less than AAA” development feeling at times, but for fans of either show, or gameshows in general, Ubisoft’s Wheel of Fortune and Jeopardy! combination game will be a good investment and a fun way to get their trivia or gaming fix.