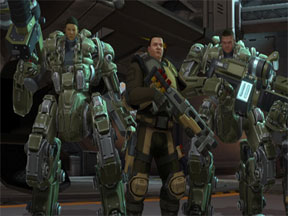 It was actually difficult to categorize XCOM: Enemy Within. The game is essentially the same as the GiN GOTY Strategy title of 2013, XCOM: Enemy Unknown. However, depending on what platform you played that game on, you could either pick up Enemy Within as a downloaded update, or as a full new game on a physical disk. PC players, such as those who get their games on Steam, could simply download Enemy Within for about $29. Console players had to grab a new game disk, which cost $39.

Because of all that, I was ready with my claws sharpened to shred this new game, or DCL, or whatever you want to call it. I played through Enemy Unknown four times, including twice just to experience new DLC content, like the Slingshot pack, which actually was a DLC. So I didn’t think that Enemy Within would change the game enough that I would actually enjoy playing it again. But I was wrong.

Enemy Within changes just about every single mission in the core game, with the exception of special missions that came into the game through DLCs, though even those are changed a little. Almost every mission now has containers of a substance called Meld randomly distributed around the map. Most of the time these containers are hidden off in the fog of war somewhere, though occasionally you can make out their shape from your starting position. The containers have a countdown timer and if you don’t get to them in time, they will self-destruct. Each container holds 10 Meld units, so you can normally pickup about 20 Meld per perfect mission. It may seem worthless at first, but as the game goes on, it will become even more valuable than the money the council provides.

Missions become a balance between risking soldiers to capture meld canisters and using the more defensive tactics that are better suited to taking down aliens safely.

There are two new special abilities that you have access to in Enemy Within, and both run on Meld, which are actually some type of little tiny nanites in an orange gel. You use the Meld to genetically modify your soldiers in a gene splicing lab, and you also use them to construct giant Mec suits in the Cybernetics lab, both new parts of your base that you will need to construct. Gene modifications are not too expensive, normally between five and 35 Meld each. Building a giant Battletech-like human-controlled robot however, can cost over 100 Meld each, or more. So the two programs kind of compete with each other for resources, since Meld is difficult to come by and spending it in one area means it won’t be available for the other.

Gene modifications are surprisingly not very invasive. A soldier just needs to spend three days in the lab and will emerge with their new ability. And they can stack up multiple abilities. All modifications add bonuses to a solider, anywhere from giving them +20 points to resist mind control to giving them +5 to their aim from higher ground. Others give non-point related bonuses, such as the ability to detect camouflaged enemies (very important given some of the new aliens) to springy legs that will let them jump up to the top of any building or perch while spending no more action points than they would by simply moving from one square to another. Having a gene mod does not exclude a solder from using psi-abilities later in the game if they are so inclined. The only real restriction is that a gene-modified soldier can never become a Mec trooper.

Mec troopers lose a lot more in the transition. For one, they have their arms and legs amputated and replaced with metal ones. They also lose their previous class levels, so transitioning over a Major or a Captain might not be worth it. They do retain some small bonus depending on their previous class, but have to start at the bottom of a new tech tree. They also can never us psionics. And finally, they can’t go into battle unless you’ve built them a mech suit. But boy, they are powerful once you get them equipped up. The suits can shoot huge conical jets of flame, lay mines, shock close quarters combatants into submission, fling grenades across the map, pummel enemy troops and robots into squishy or sparking masses of crap, and wield oversize weapons that are more powerful than tank cannons. They also advance on their own full tech-tree, and different suits can be modified and upgraded differently too. And they look darn cool with various tiger-stripe and camouflage patterns available.

The aliens also get some new units, including their own Mec trooper, which is a little grey alien packed inside a Mec suit who wields dual plasma rifles of doom. There is also a very scary stealth alien that looks like a mechanical flying octopus when it’s not cloaked. They like to sneak up on lone XCOM agents and strangle them to death.

But the coolest addition is a human faction, sort of like a rival XCOM group. Called EXALT, they are doing all the things that XCOM is, including researching laser and plasma weapons and genetically modifying their soldiers. While not allied with the aliens, they admire the alien’s mission to push humanity to its limits, and detest XCOM for trying to fight it. Throughout the game they will cause panic in countries, steal money from your bank and also plot missions around the globe. The only way to fight them is to send one of your soldiers on covert operations when you discover an active cell. The covert soldier is only armed with a pistol and has no armor, so upgrading pistol technology in the foundry and getting to plasma or at least laser guns is a must.

Each covert operation ends with a full XCOM team going in to extract the covert operative. Thereupon one of several things happen, with the most likely being having to defend a relay from waves of EXALT troops while information is being transmitted. You also have to keep your covert agent alive or the mission will fail. If they live, they can rejoin your squad as a normal soldier again. I normally used a sniper for the covert ops, gave her the 007 nickname and everything. I found that her gunslinger ability and her double tap, when combined with a plasma pistol, was quite effective.

EXALT troops are much smarter than aliens it seems. They will take cover, heal their wounded, use rocket launchers if they catch you grouped, and try to push their snipers to high ground before putting them on overwatch. An EXALT battle is a tough but fun one.

Eventually if you do enough covert operations, you can figure out where their base is hidden, raid it, and remove them from the game once and for all. There are also several new missions that revolve around EXALT.

Another nice surprise is that the base defense mission everyone loved from the original XCOM game twenty years ago has been added back in now. Unfortunately, it’s not a unique base, so how you build out your facility won’t matter. But it’s a great mission and is actually one of the toughest in the entire game. You don’t get much warning before it happens and have to fight using whatever weapons your soldiers have on them at the time, and also using generic security troops who are really unprepared for an alien invasion. It almost reminds me of an episode of Stargate SG-1.

There are some other nice additions. Soldiers can now be configured to speak in French, German, Spanish, Italian, Russian or Polish, which is really cool. It’s odd that no Asian languages were included given that there are so many Asian troops in most squads, but still a nice selection. You will now also get medals that can be awarded to solders that provide bonuses. You get to choose who gets them and why. And finally, there is a zombie-level mission that is just so creepy and cool, it had to get special recognition here.

So there you have it. Even if you have played through the original XCOM many times, it’s worth picking up Enemy Within and falling in love all over again. I suppose one could argue that the core game should have been this good to start, but it’s nice to see that Firaxis is still putting a lot into this amazing title.