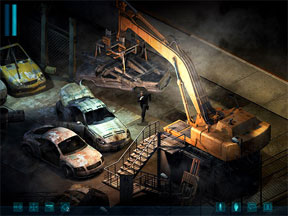 [Editor’s Note: Normally GiN does not score a game in Beta, but this one is more of a Gold version. Unless they somehow really drop the ball just before release, Restricted Area is going to be a great title you don’t want to miss.]

Restricted Area seems to take the best parts of several of my favorite games and puts them into a single product. The game should appeal to both role-players and action oriented gamers, which is an increasingly large market these days based on the number of products trying to appease them.

The game is set in the distant future in a Blade Runner-like world where corporations have most of the power. They don’t have all the power, but a good deal of it. Like a good pen-and-paper Shadowrun or Cyberpunk RPG, you end up working for a series of Mr. Johnson’s who tempt you to do illegal things in a world without much law anyway, never give you their real name and know enough to never ask yours.

The interface is a top-down view, slightly offset so you are not gazing at people’s heads all the time. Monsters come at you in hoards on missions and you either have to blast them or cut them quickly. Anyone who has played Diablo will instantly recognize the play style.

Like the original Diablo, you start the game in a small seedy section of town where you can’t use your weapons as this part of the game is setup for you to role-play and get missions. There is a weapons dealer, a cybergear dealer, a loan shark, a prostitute, a bum, a pilot, and guys in suits that offer you missions based on your reputation. As you complete missions you get a better reputation and are offered harder missions for more pay. Once you accept a mission, you can hire the pilot to fly you to the zone where the mission takes place.

Outside the original part of town where you start, the world looks a lot like the famous Fallout Series. There are even vaults and a good mixture of old technology like clubs and new tech like plasma rifles. Inside dark abandoned factories and the like, your cursor acts like a portable flashlight. Whatever you point to is illuminated somewhat, which is a really cool effect that I highly enjoy. If you think you see something moving in the dark, you shine your light on it. If something is there, then you are ready to click the right mouse button to blow it away, just like having a light on the end of your gun.

Though the levels themselves seem randomly generated, at least they look good. I prefer a level system where you are rewarded for sneaking into certain areas or exploring what is over the next hill even if it is not necessary for your main mission. Wandering around here seems fairly pointless except as a way to blast more monsters to get experience and level your character. Still, each level is small enough that you won’t be spending hours in it getting bored before finding stairs going down to the next.

Your missions are fairly easy in concept, though sometimes difficult to execute, and are varied enough that you won’t get too bored doing the same thing all the time. Sometimes you have to locate a chest with some new technology in it that your employers want, sometimes you have to kill someone and once in a while you are paid credits for every mutant you can bring down in a zone, which is quite profitable. There are also several plot specific missions that you carry out to advance the storyline, but I will write about the RPG aspects later.

Gameplay mechanics are surprisingly easy for a PC game. You almost never have to touch your keyboard. You can set up a simple scheme with just your mouse where the left button moves your character to a spot and the right button shoots. The center wheel can be set to activate a special ability or pick up all nearby items. You can play for a long time with just your mouse, and only really need the keyboard to check your inventory and examine all your loot.

There a lot of weapons to find, many with special abilities like extra damage against a type of monster or pushing back a creature on a successful hit. There are light weapons like pistols and heavy ones like flame throwers, so you can advance your character to your specific play style. There is also armor of a type in the form of cyberware. You can enhance your legs, arms, eyes and internal organs with cybergear you find or buy in town. This can make you harder to hit, more skilled with a weapon, boost an attribute like strength or dexterity or even grant some special powers like better vision in dark places.

You can choose one of four characters to play and right upfront they tell you the difficulty level of picking each one. For example there is a traditional cyberpunk type hero, you know the type with the long black trench coat and the heavy shotgun, who is the easiest to play. The hardest is a girl named Jessica who can hack into computers and move around cyberspace in some missions. At least she has a floating pet robot that can help her fend off bad guys. There is also a magic user who has some great natural abilities but is very, very weak starting off and a martial arts character who is very tough, but does not use ranged weapons, so expect a lot of cuts and scrapes using him.

Each character has their own back story that is revealed, at least somewhat, in the opening intro of the game, which I thought was cleverly done as you ride the train into your new hideout area. Each character also advances in vastly different ways. The martial artists is not going to be able to wield a plasma rifle and Jessica can’t learn spells. But each one has their own special powers that make them useful and fun characters to play.

In a pretty neat twist, the characters actually get to meet one another in the course of the game as part of the plot-enhancing missions.

Restricted Area does a lot of things right. There is enough role-playing to keep a hardcore RPGer like myself happy and just when the levels start to get a little tedious, they seem to throw a boss level creature at you to shake things up. And it’s nice to find a game of this type that is not set in a medieval world. So for a sci-fi, shooter and RPG fix, sneak on into Restricted Area.