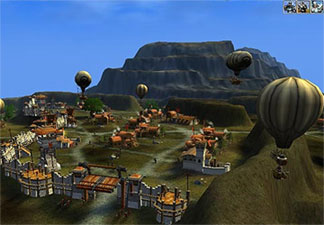 The first time you see Besieger in action, your jaw might drop at the photorealistic landscapes found within. You can rotate the map in all directions, and the two races in the game can build some really interesting buildings and units.

First there are the Vikings, which are a bit more primitive than the other prominent race featured in the game. That does not make them less powerful really; it’s just that their technology is a bit different. They can’t incorporate guard towers into their walls, which of course is a disadvantage when trying to defend a fortress, but to compensate, their standalone towers are pretty powerful, especially after you get a flame enhancement that will cause area effect damage and really cause havoc with siege engines.

The Cimmerians are more technological. They have stone walls and you can put guard towers right in them. They also have more powerful siege units and can move quickly with mounted troops.

The single player game consists of following each race through a series of struggles that will have you building towns, raiding enemy villages and even fighting quite a few non-aligned creatures along the way. You will also recruit several hero-type characters with special abilities that will follow you into battle.

I like the way you recruit people. You build a dwelling for them and over time new worker-class peasants show up. You can then put them to work in the mines, chopping trees or gathering stone. Or you can send them to the training barracks you have built and have them reemerge as fighters or archers. In a pinch, you can have soldiers train in reverse and turn back into workers, though this is surly a desperate move.

As units fight they gain experience and become better at their job. If you switch a units job, like turning them from a foot soldier to an archer or even back to a peasant, they retain their experience and generally work at their new task a lot better than a green recruit. So you often do your best to save your veterans for times like spearheading an important attack at a critical moment.

With good graphics and interesting units, you would think a game like this would easily capture your heart. But perhaps not. Unfortunately the interface is not up to par, which makes the game not only difficult to play, but also maddeningly frustrating at times.

It mostly comes down to the artificial intelligence of the units. If you are attacked by troops and they run up to your wall, your archers can’t seem to figure out to fire down at them. And worse yet, your towers inside the wall figure that the best way to defend your fort is to fire through your wall to hit the enemies behind them. All that does is knock down your walls faster.

It is also difficult to construct walls in the first place. It’s difficult to flip them the correct way so that your archers can climb up onto them. And even if you put a long stretch of wall together, your troops on one section of wall can’t run over to another one. You have to build stairs on each and every section of wall.

Also, if the enemy runs up beside one of your towers, your tower tends to stop firing at it. It just sits there letting the enemy tear it down.

The game’s developers should take a look at Firefly Studio’s Stronghold title if they want to see how to do a castle building and assaulting game right.

Like any real-time strategy game, the real strength of a title shows up in the multiplayer arena. The deficiencies of the game’s AI are less evident here because you are playing with other humans, though you can also take on computer opponents. I did find that after extensive battles with the computer, I learned to compensate for some of the AI’s more obvious flaws, though I can see lots of people getting frustrated long before that point.

If you push on though, the game is rewarding and its pretty fun to set up little mini forts, letting wave after wave of computer opponents hit you. With a tiny improvement to AI path finding, a slightly better way to construct and maintain a wall and an improvement in how towers target enemies and shoot, the game would be close to perfect. As it stands, it gets high scores in every area except gameplay. So the overall score is still a respectable 4 out of 5 GiN Gems, just be prepared to wrestle with the interface as much as your opponent at times.