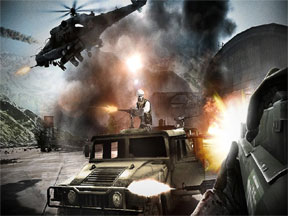 Heavy Fire: Afghanistan, an on-rails, military shooter from the first-person perspective, comes to us on the tail of blockbuster hits like Call of Duty: Modern Warfare 3 and Battlefield 3. If you are expecting this military shooter to compete with these forces then you will be sadly disappointed. Though possessing solid shooting and targeting, Heavy Fire: Afghanistan’s lack of strong mechanics and visuals will leave it wilting in the shadows of better titles from the genre.

Heavy Fire: Afghanistan starts off by introducing you to the loyal protagonist, Will, who has only ever wanted to be a Marine. The whole monologue intro comes off as trying way too hard and sounds a bit like a bad advertisement for Marine recruitment. After this, Will briefs you before every mission with his take on the events leading up to the task you’re about to undertake.

You are introduced to the gameplay by jumping out of helicopter right after a fellow soldier who looks like he got lost on his way to an original PlayStation game. The rest of the characters follow this pattern of badly rendered models. You soon see that the landscapes match the character models perfectly. Much of the same colors and structures from modern day military shooters are present, but without the stunning visuals to back it up, Heavy Fire: Afghanistan looks and feels like a run through a landscape of broken building blocks. Though the levels vary slightly, ranging from gunning in a helicopter to shooting down baddies from a military vehicle, the visuals and mundane gameplay never offer anything exciting.

The majority of Heavy Fire has you "running" through war torn cities in the middle-east using all the mechanics you would expect from an on-rails shooter, using the nunchuk joystick to duck behind walls for cover and Wii remote to aim and fire on the very poorly done character models. Along the way you as you shoot down terrorists, you nab health packs and special power-ups for faster firing rates, more powerful bullets, etc., along with basic ammo packs for your weapon. This cookie-cutter on-rails execution leaves little to be expected from the experience, but does offer you the old-school feel of a classic arcade shooter.

Sound is another issue in Heavy Fire. Enemies firing weapons not seven feet from you sound a whole battlefield away and your own weapons sound like pellet guns. You can hear the battle going on all around you, but when you focus on what’s happening to you specifically, all you get are lackluster sound effects that do little for the boring trudge through the game’s missions. Most of the time, you aren’t even sure if your bullets are doing any good. Thankfully, enemies anticlimactically drop when their health is drained, allowing you to continue your mundane journey.

If all of this negativity makes it sound like you’ll never be able to finish it, think again. Heavy Fire: Afghanistan difficulty is set as low as games can go. Your character can only take damage if the enemies have a red exclamation point above their head, whether they are actually firing at you or not. So have no fear, gamers should have no trouble making it through the several missions available to you. If you really want it to be a breeze, fire up the multiplayer and you’ll feel like you and your buddies could single handedly win the war on terror.

Heavy Fire: Afghanistan is able to offer you the nostalgia of an on-rails arcade experience and gives you the tight controls that can make the game capable. However, the poor visual and gameplay mechanics render it impossible from offering anymore than a poor shooting experience. Heavy Fire: Afghanistan tries to be good and has potential, but it falls short with presentation and most importantly, fun.