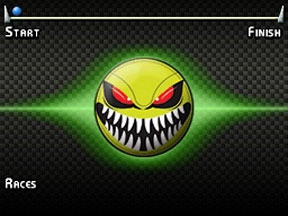 The cover of this game confused me to no end. I sat for the better part of ten minutes just trying to figure out what it was. After a little research I learned that it’s a game based off of a children’s show. Since I never heard of the show, I didn’t have any idea what the game was about.

So I flipped open my 3DS (which plays DS games) and expected to have fun. Sadly, I was wrong in every sense of the word. This game defines a bad game, in fact I looked in my dictionary for the definition of bad game and all it had was a picture of Dagedar. After playing the game I have no idea what DageDar is even about. Its some sort of a racer I think.

You roll little balls in a track in an attempt to beat another rolling ball. Simplicity normally isn’t a bad quality. However there is such thing as too simple. I played level upon level and it was the same thing, over and over. Eventually I just went into autopilot and just went through the motions. With all the games (both good and bad) that I’ve played I was sure this game couldn’t beat me. Before I knew it I was zombified.

This games fun factor is non existent. During the first hour I played I fell asleep. My buddy shook me awake and I drank near a half gallon of ice tea and went back to playing only to pass out again thirty minutes later. At first, I thought I might have been too hard on it. I mean, it’s a kids game after all. Perhaps a kid would like it a lot more?

So I gave it to my friends younger brother, an anxious ten-year-old, and asked him to try it out. Not more than fifteen minutes later, he brought it back and gave it to me, saying he was bored. If a ten year old can’t stand it for fifteen minutes, there is something seriously wrong. Heck, I still play Pokemon silver and that was on the GameBoy Color. Being a kid’s game doesn’t excuse laziness.

The audio was cheezy and the value of this game is very bad. Unless you find this game for five dollars, avoid it. There isn’t a single way to rationalize this game being good. Adding all these factors together I give DageDar 1.5 GiN Gems.