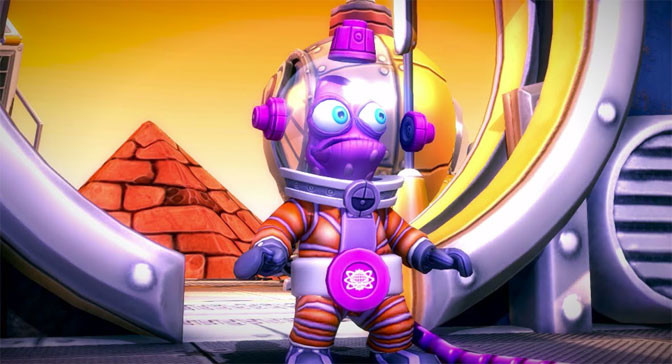 PC, PlayStation 4, Wii U, Xbox One

Shiftlings is a funny new platformer from Sierra. The premise is unusual in that instead of running a single character through jumps and puzzles, there are two characters that must be maneuvered together. The game allows for single or two-player cooperative gaming, so if you have a buddy you game well with, considering asking him or her to join you for this game. Personally, I think it’s easier with two players as long as you communicate well.

The story of Shiftlings is that two hapless janitors, Purple Plop and Green Goop, are entered into some kind of reality TV show for janitors, so they are competing to successfully fix things. The two are tethered together in space suits connected by a kind of atmospheric umbilical cord. I don’t really understand the pseudo science behind this arrangement.

Unfortunately, just before they are supposed to start, Green Goop finds the fizziest drink in the universe behind a forbidden door. Despite the “Do Not Drink” sign, he gulps it down right before Purple Plop can stop him. Then something happens. Does he burp? Does he fart? The world may never know, but I think he farts. Whatever he does, he completely inflates Green Goop’s suit. Before they can resolve the problem, the show starts and they have to play the game.

As the player, your goal is to solve the problem and get to the exit without getting them fried by lasers or having the cord cut. The gas can be moved from one character to another to get around obstacles. The smaller character can jump on and bounce off the inflated one to reach high platforms and the inflated character can stand on pressure plates to open doors.

The game is more challenging in single player mode. Managing the movements of both characters, is easier with two people provided both play in sync with each other. With 50 levels of increasing difficulty, there is a lot of gameplay, but there are also some drawbacks.

The music gets repetitive, as it does in most platformers, but there is also an annoying announcer. At first his snarky comments are funny, but after playing for a while they get really annoying. Eventually, I turned the sound off all together. Given that you may be wondering why I gave audio 4 GiN Gems out of 5. I did that because the music in this is high quality and less repetitive and annoying than your average platformer, and some people really like the snarky voiceover trope in a game.

For a game that is essentially one long fart joke, Shiftlings is really fun. At its best it is a two player cooperative game, but there is plenty for a single player to enjoy. Shiftlings earns 4.5 of 5 GiN Gems, platform players check this one out ASAP.