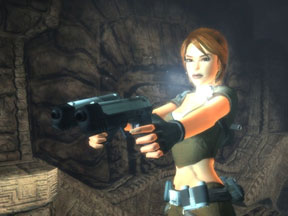 It seems unbelievable to think that Tomb Raider began over 10 years ago and that there are a generation of gamers who have seen the movie, but never heard Lara’s blood-curdling scream as you run her off the side of a cliff only to flinch at the sound of her bones breaking as she hits the ground. A whole generation who have never watched her drown and revelled in her death throes as recompense for her inability to move with anything more than the agility of a sack of flour.

Well, for those uninitiated, the only Tomb Raider games you need to pay any attention to are the first two. The first for its fantastic set pieces and the second for removing the annoying save crystal system, adding one of the best game scores ever, giving us the Venice level and introducing a bit of gun fighting with hired thugs.

After TRII, the series began its sad demise. Lara had become an overexposed media whore by this time and the games themselves were suffering from poor level design and complete loss of direction. Caught up in the Metal Gear and Splinter Cell frenzy, Lara was sneaking through urban environments, with little need for her trademark khaki shorts. But after a short sojourn, Lara is back and she’s back where she belongs – in tombs.

With the promise of tombs, rope-swinging, jungles and globe-trotting adventure in search of artefacts and relics, gamers who were there the first time round were steeling themselves for disappointment. I for one was hoping against hope that Tomb Raider: Legend would be a glorious comeback.

Legend’s opening sequence has Lara scaling a cliff-face and nimbly leaping up to a ledge looking over a jungle canyon, complete with roaring waterfall. For those that remember the original Tomb Raider games, back when they were actually good, Legend will be like meeting up with an old friend.

Lara looks great, the environments are lush and richly detailed, especially the landscapes, rather than the more urban interiors, which look rather dated. In short, Legend takes all the best things from I and II and adds a few new improvements.

In this post-Ico gaming era, Lara no longer plummets to her death by idly walking off the edge of precipices. Once having a frustrating disregard for self-preservation, Lara now grabs hold of the edge of ledges, rather just accepting her fate. Her acrobatics also lend a lot to the Prince of Persia series. Both additions go a long way to ironing out those flaws that annoyed TR devotees and deterred the less enthusiastic.

Rather than ignoring the existence of the movies and continuing blithely on, the developers have decided to retain Lara’s sidekicks and HQ back at Croft Manor. I understand the decision and it’s a nice way of bringing continuity to the TR universe. However, the lame jokes and asides coming in over Lara’s earpiece can get tiring very quickly. Lara has more cause to talk and I’m not sure I like that, favouring the more enigmatic character of the earlier titles. The less we knew about Lara the more interesting she was.

However, we must move with the times and despite the annoying quips, the sidekicks do provide the developers with an easy way to move the narrative along, albeit with the occasional clumsiness of a Scooby Doo plot.

In true, TR style, Lara jets from one side of the planet to the other. Starting in Bolivia and quickly jetting across to Japan, Africa and England. But the first thing you notice when returning to the TR world is that Lara is so much easier to control. You don’t have to guide her every step of the way, instead, just aim for a rope or run up to a jump and she does the rest with feline grace. And the best bit is that it feels like you’re doing all the fancy stuff yourself. I like it when developers make me feel all agile and skilled.

My favourite sequence was leaping between window cleaning cranes on the outside of skyscrapers in Tokyo. These true leaps of faith left my heart in my mouth, but without that crippling fear that one false move and she’d go running off the edge lemmings style. Lara’s obviously been doing some work on the parallel bars back at the home gym because now she can swing from bars, effortlessly scaling castle towers using wall sconces and flag poles.

One addition has finally been made to Lara’s arsenal. In previous games she was regularly relieved of all her weapons, which pretty much left her defenceless. My argument was that surely her bare hands would be lethal weapons and now, at last, Lara can fight. Kung fu kicks and a nice bit of bullet-time have been thrown in to bring some of the action sequences to life.

Strangely, some Simon Says button pressing sequences have been thrown in, reminiscent of Shenmue. There are a number of cinematic action sequences, which require the player to press the corresponding button when it flashes up on screen. For instance, press A when it appears on screen and Lara ducks under the falling beam, then quickly press B and she makes a leap as the ceiling caves in. This system is one way of allowing players to interact throughout finale cutscenes, but they require little skill. If you fail the first time, they’re usually short enough for you to remember the sequence and complete them with little incident the second time.

The levels are varied enough to spur you on, taking Lara around the world, to an array of breathtaking clifftops, leaping from the rooftops of Tokyo to the jungles of Africa and snowscapes of nice breakaway Russian providences. The puzzles should please those that like a bit of head scratching, as some of them err towards the obscure, while others may prove too easy for puzzle-heads. Check out the puzzles in Croft Manor for some real brain bending and some really fun extra levels.

When it comes to boss battles Legend’s no innovator, but there’s still that moment of satisfaction when you can finally stop running around the room thinking how do you kill this guy and turn around to face them thinking ah ha, I’ve got it. However, the tentacle beast at the end of the England level had me stumped and close to giving up. And even once I’d discovered its Achilles heel, it was a frustrating two hours trying to execute said method effectively.

Legend is definitely the most cinematic of the TR series, lending a lot to Lara’s big screen outings, with even the voice actor sounding like she’s doing her best Angelina Jolie impersonation. There are more slow motion leaps from huge explosions, more car chases and even an undercover-in-slinky-black-dress scene worthy of Luc Besson’s Nikita. However, some may find the whole experience too easy and complain that it’s all over too quickly. But for those have a quick romp, rather than a life-sapping commitment, Legend could one of the few games everyone will be able to finish.

Having played the 360 version of Legend, it seems a shame that Eidos decided to do a straight port, rather taking advantage of the additional capabilities of the new Xbox. There are moments when the graphics look glorious, but the cut scenes designed for PS2 just don’t cut the mustard when played on a 360. The next gen eliminates the need for blocky hands and flat, lifeless skin and character models, which badly date the CG in Legend. The nightclub scene in Tokyo should have had more hustle and bustle, more textures and glitzy lighting effects, instead it had about two people lumbering clumsily to the music, in a club that looked like something out of Miami Vice. But with TR back on track, surely it’s only a matter of time before we get the all singing, all dancing next instalment for the series.

In these modern tomb raiding times, Lara has more gadgets at her disposal, including binoculars which can be used to analyse features in a room, Metroid Prime style. Her grapple hook comes in handy when she wants to make like Spider-man and swing her way into and out of danger. And all in all, the modern touches don’t detract from Lara’s central focus, which is looking foxy while scaling death defying heights, staying sexy under fire and snagging the artefact from the clutches of the crazed megalomaniac.

All in all, this is a welcome return of everyone’s favourite female gaming icon. Lara is back on top form although she needs some set pieces of the calibre of her first two outings, but now that Crystal Dynamics is in the developer’s chair I’m sure they’re not too far away. Things are looking good for the Tomb Raider series and old fans should feel heart-warmed, whilst those that never liked TR should probably steer clear. Legend should attract a new generation of gamers, although this time around it won’t have the wow factor and impact of the original. This is proof positive that the latest in the Tomb Raider series is illustration of it keeping up with today’s gaming standards, rather than setting new ones as it once did.