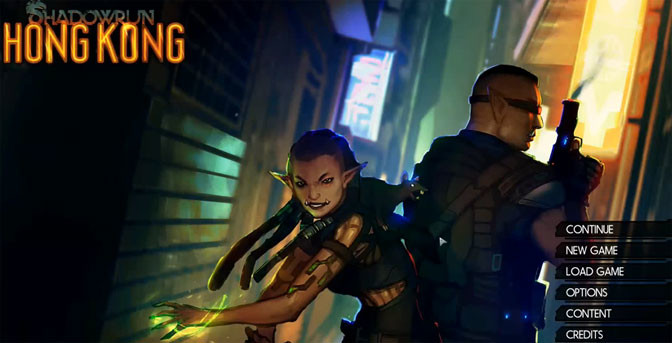 When Harebrained Schemes brought out the Shadowrun series a few years ago with Shadowrun Returns, it burst onto the scene to take one of the most beloved pen and paper role-playing games and turn it into a solid videogame RPG with turn-based combat that really captured the flavor and the ruleset from the tabletop game. The sequel, Dragonfall, made up for some of the initial stumbles of Shadowrun Returns, and went on to capture the 2014 GiN Game of the Year in the role-playing category.

The other two games took us to Seattle and Berlin, while Shadowrun Hong Kong takes us to, where else, Hong Kong. The interesting thing about the setting is that the main character in the new game has no connection to Hong Kong, or in fact to the other games in the series. You need to make a totally new character and it’s implied that while they have some knowledge of how the streets work, that they are more or less new to shadowrunning and know nothing about the strange way that Hong Kong functions. This makes it a perfect entry point for new players who have never played any game in the series, and gives veterans a new area to explore that is different from what we have seen before. Oh, and there are several cameos from the previous games, though some of them are pretty well hidden or just mentioned in passing within other character’s dialogs.

The main plot of Shadowrun Hong Kong is, as with previous games, more or less just a loose framework that provides the incentive for players to go on a lot of side missions. As before, you can’t go straight down the main mission path as external forces will prevent you from doing so. And besides, the side missions are just as cool as the main ones, and in some cases even a bit more enjoyable depending on your play style. You might find yourself doing everything from robbing a museum (sound a bit like Dragonfall?), ruining the Feng shui of a major corporation, going undercover at a geeky sci-fi type convention or even trying to solve a murder mystery. Shadowrun Hong Kong has the best set of optional missions yet, with a great diversity that ensures that everyone will find a mission or two that really suits their style of play.

Most of the missions also come with surprises that will keep you on your toes. You might run into a rival shadowrunning team for example, and can then decide whether or not to team up with them to fight a much greater force or to make them enemies as well, or you might get double crossed by your employers and have to decide how to proceed. Most missions also have interesting ways of completing them where a little bit of thought can go a long way to making things a bit easier – and fun. Right from the very first mission, you can expect a lot of surprises that you won’t see coming. You can check out our run though of the first hour of gameplay to see a few good examples of this – just hang onto your seats.

The core gameplay system for Shadowrun Hong Kong is little changed from Returns or Dragonfall, though some key improvements have been made. One of the biggest is the total revamp of the Matrix, which was a stated goal of the kickstarter campaign. Even in the more polished Dragonfall, the Matrix was little more than a simulation of the main game world. Now however, the Matrix lives and breathes to its own beat and rules. Guardian AI constantly sweep the corridors of the Matrix in real-time, forcing those jacking in to scurry around to avoid their gaze. If you can avoid having any of the guardian programs spot you, then you can traipse through most systems like a true hacker and remain completely undetected. This gets more difficult later in the game, when the patterns get tighter and more guardians show up to lockdown higher security operations, though you can acquire things like passive programs that make your avatar run a little bit faster.

Should you get spotted, things drop to turn-based mode and you can launch your own programs to help out, as well as attack the white AI. Every round that a guardian can see you increases the system alert, so if you can take them down quick enough, one misstep won’t trigger a massive alert and things will go back to real-time mode. If you do generate an alert, then you can expect a lot of AI to spawn, including sometimes the dreaded black ice. There is also a special hacking mini-game now for trying to break into a node where you don’t know the code to do so, though this seems really difficult, at least compared to the rest of the game. You are given a decker character as one of your core team members so you won’t miss any of the Matrix content and can probably find value in taking her on just about every mission unless you are playing a decker yourself.

The second new aspect of Shadowrun Hong Kong is a bit more subtle, but may come into play more often than the Matrix improvements. You now have an ambush button which can be used to drop your party into turn-based combat mode even if your opponents have not yet seen you. This essentially gives you a surprise round where you can work to get the upper hand, or to buff your characters for free before the fight. The one caveat is that to push the ambush button, an enemy has to actually be visible on the screen. I would prefer if players could trigger turn-based modes at any time, such as when you know that you are walking into an ambush yourself. There was a player mod that someone made for Dragonfall that allowed this, and I enjoyed it quite a bit as it gives players an advantage without unbalancing the game. Even in its more limited official form, the ambush button is a big help.

Your team of Shadowrunners in Hong Kong that you will be given near the beginning of the game, or which you will recruit as you play, are all varied and provide needed skills for the team, which is more or less how the other titles worked. You are given access to a shaman (of the rat variety), a decker, a rigger, a street samurai and depending on your choices, can also recruit someone who is sort of like a physical adept type character, but with a very unusual back story and special abilities. About the only character you don’t have access to, without having to recruit one for missions off the boards and thus paying them, would be a pure mage. Given that I mostly play mages, this was fine with me because it let me specialize in that. But you can be anything you want. It just means that one team member who duplicates your skills is probably going to be left behind a lot. Each team member has access to unique powers which can be built out as well which makes them all different from a standard archetype.

All of the team members have rich backstories that you can learn about with skillful dialog choices. There is a ton of dialog in Shadowrun Hong Kong, much more than with either of the other games. This sometimes devolves into things like philosophical discussions or talk of childhoods and the like that some players might find boring, but which role-players will probably love. Most of those long conversations are optional, however, many eventually result in unique missions where you volunteer to help solve a team member’s major problem. Putting in the work to get access to those optional missions are more than worth it as they are really fun to play, and often result in some major upgrade or new abilities for that character as a reward.

Graphically, everything looks very much like Hong Kong, at least in the major areas of the game. A basement or a subway station is pretty much going to look the same in Hong Kong or Seattle, though major landmarks do look different. Shadowrun Hong Kong isn’t exactly dripping in graphical style that says Eastern adventures, but they do contribute, along with the missions and the NPCs, to a general feeling that you are no longer in Seattle or Berlin. The change to Hong Kong is much more dramatic than moving from Seattle to Berlin at least, though one always wants more when it comes to graphical flair.

Shadowrun Hong Kong is a thoroughly enjoyable RPG in the Shadowrun universe and offers a delightful single player experience, especially for those who enjoy deep role-playing, turn based combat and the cyber-punk type atmosphere. It’s not a quantum leap from Returns of Dragonfall, but instead a logical progression with improvements that make sense without tossing out any of the core gameplay. Available for a price that is less than half what most AAA titles cost these days, there is a good 40 hours of gameplay inside it without counting replays, making it a very good value as well.

Shadowrunning under Hong Kong’s neon lights is a lot of fun, and the game earns 4 and 1/2 GiN Gems out of five.