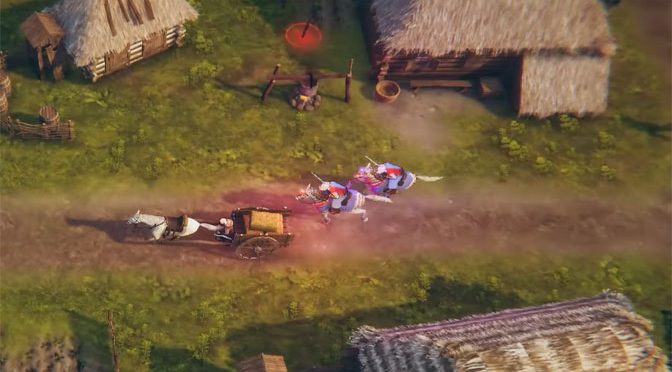 The Rustler game from developer Jutsu Games made quite a splash when it was first announced because of its association with Grand Theft Auto. The game was even originally called Rustler: Grand Theft Horse. In trailers and various other ads, the game promised to provide a Grand Theft Auto type of experience, but with a medieval times setting. And yes, while comparisons can easily be made between Rustler and Grand Theft Auto 2, the game is actually a lot more than just that. 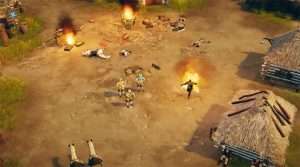 Rustler is in fact a fully realized 2D world set within a respectably large play area. There is an ecosystem of sorts where you can actually believe that all of the little shops and people are interconnected in a living world that actually makes sense. In this way, Rustler is much closer to a more modern title like Fallen Tree Game’s American Fugitive than an ancient one like GTA 2. Rustler could easily present itself as its own world and a standalone adventure game. That is the tactic that American Fugitive took even though it also borrowed heavily from GTA in places. But that game struggled in terms of sales and acceptance, so you can’t really blame the Rustler developers for trying to tie themselves with a known classic.

The game has been released on Steam for a little while now, but it was still technically an early access game. Since we don’t tend to pull too many punches in the reviews here at GiN, we generally like to wait until a game is fully released to give it the chance to put its best foot forward. So that is what we did with Rustler. And while it does seem like a finished game now, we did run into several bugs as we played. None of the bugs broke the game, but quite a few did kill missions and required replaying them. It’s currently on sale for under $20 on Steam, so it’s a pretty good value, but know that even in its advanced state, you are probably going to run into some bugs and other problems as you play. 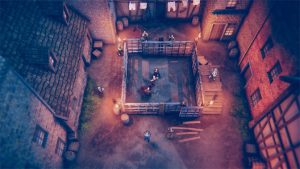 The world of Rustler is presented as a 2D medieval world that is purposedly made to be horribly inaccurate. This isn’t anything like Kingdom Come: Deliverance or even Medieval Dynasty. This is more like a Saturday morning cartoon version of a medieval kingdom, if those cartoons were spiced up with lewd behaviors and foul language. The developers realized that their game was not going to be historically accurate, so they really leaned into the mayhem, pulling up references from everything like Monty Python, popular television shows, rap culture, ancient fairy tales and of course Grand Theft Auto. It’s clear that the developers had a lot of fun making the game, and that irreverent humor really comes through well. They even made a live action trailer to show what the game is like, and it’s pretty close to how the game really plays.

By the way, you should know that Rustler has an ESRB rating of M for mature, and for good reason. Even the graffiti that tags the walls around the kingdom are riddled with profanity, which is a perfect reflection of the dialog, not to mention some of the subtext of what you observe or are asked to do. I have no problem with games that are like that, but this is probably not a game that kids should be playing. 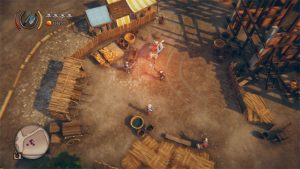 The adventure centers around a horse thief named Guy who gets into all kinds of trouble. He actually begins the game as a sort-of wannabe horse thief living with his mother in a peasant shack. You can even plow the fields outside for a few extra coins. But Guy is also working for a local crime boss, and you probably know the drill from games like this. Your first few assignments will be low-level ones that are increasingly violent and serve as a tutorial of sorts on how to play the game. Eventually your friend comes up with a scheme to set up your own thing, but requires 5,000 gold pieces to get started. For that, you need to take on freelance assignments around town which are presented in little quest blocks on the main map, very much like GTA. You simply head over to one, stand in the circle, and begin whatever crazy task the even crazier person who lives there wants to give you.

It is within these quests that most of the humor of the game comes through. For example, you might accidentally mention the Spanish Inquisition, which will cause them to appear. While these occasionally ribald jokes sometimes fall flat, you will probably find yourself laughing at them more often than not. Eventually you will open up more of the game’s map which leads to new quests, higher rewards and more irreverent humor.

Most missions in the game involve stealing something or killing someone, or doing both. And if you get caught doing something bad, you pick up a wanted level, just like in GTA. At lower wanted levels footmen will run you down, but at higher alerts armored knights on horseback (with flashing blue and red lights and a trumpet-like siren) will give chase. You can fight them or run, or trot away on a horse if you happen to have one nearby. Or you can horse- or cart-jack a passerby to add some more momentum to your escape. Ditching the warrant level involves either ripping down wanted posters or finding your way to a hidden, wooded area to wait for things to cool off. 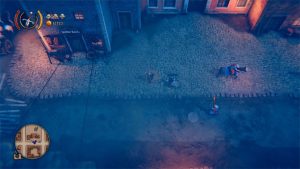 There is also a role-playing element in Rustler. As you adventure, you will earn skill points to improve your character. This gives you perks like the ability to hit harder, sustain more damage, reload crossbows more quickly, whistle to call a random horse to your side and quite a few others. Many perks have up to three levels too, with higher levels costing more but providing better rewards. There seems to be enough points awarded to eventually master every skill in the game, especially if you do all of the optional side quests, but at first you will need to pick and choose where to put them based on your play style. And some seem way more useful than others. For example, one perk makes it cost less money when you punch a bard to change the song he is singing. 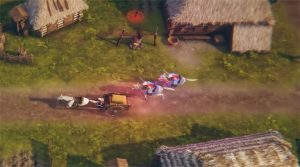 The one real negative about Rustler is the number of bugs in the game. Some of these are critical, like controller support not properly letting your horse or your character sprint when the L1 trigger is pressed or held down, although he runs just fine when left shift is pressed on the keyboard. That one was fixed by remapping the controller key. Other bugs broke missions, requiring us to do some tasks over again. For example, in one mission where we were basically doing an MMA cage match fight, the game was supposed to “lock” our weapon wheel onto fists so the combat would not be lethal. But instead, it locked us on to the horse poop thrown weapon. So, we could pepper our opponent in dung, which was kind of funny, but could not do any real damage. And since we couldn’t switch to fists, our only choice was to stand there and get beaten until the mission failed and we had the option to try again. Another time we were told that we had drowned because we walked onto a pier while on horseback, and I guess the game didn’t know what to do with that. There is a bug reporting option on the main menu screen, so it seems like the developers are at least trying to quash them all. 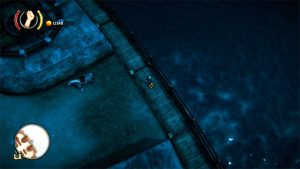 If you just do the main quests, then you can burn through Rustler in about five to 10 hours. As someone who likes to do every single available mission, I found myself playing the game for much longer. I put over 25 hours into it, although some of that time was devoted to exploring the world and finding the many (generous) hidden loot locations and other interesting Easter eggs hidden in the game world. Resources respawn too, so if you find good armor or an automatic crossbow in a location, chances are it will be there again a few minutes later, so it pays to memorize points of interest. 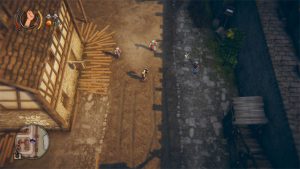 Rustler is a fun game that does not take itself too seriously. If you are looking for an interesting adventure that is just a little bit on the lewd side, then you can have a lot of fun being a medieval horse thief among other things.

Rustler earns a respectable 4 GiN Gems out of 5. If you’re not too careful, this campy medieval thug of a game may steal your heart.