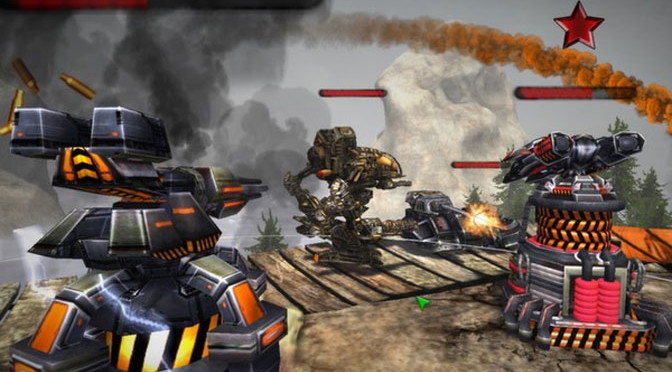 Rush for Glory is a tower defense title that just recently came out for the Steam download service. It’s a fun game that more or less follows the standard rules that most tower defense titles go by. In other words, it won’t be breaking any barriers or charting too much new ground. However, sometimes there is no need to reinvent the wheel. It does add a few nice extras here and there and ends up being a great value, especially at the sub-$15 price that it’s being offered.

The premise of the game is that there is a peaceful planet called Cnep that has suddenly come under attack by a race of highly advanced aliens. The aliens have all kinds of interesting gear, like men in powered armor, fighter jets and even battle mechs in later levels. There is one enemy that looks like a Locust straight out of Battletech. Cnep by contrast seems to be very low tech with people living in log cabins or even teepees. I’m not really sure how such a low tech planet is able to field machine gun, electrical and missile towers for defense. It’s kind of implied that you, the tower builder, might be an alien as well, sent there to defend the people. But it’s not really all that clear. While tower defense games can field good stories – Defense Grid and Defender’s Quest: Valley of the Forgotten are great examples – it’s not really necessary.

The people of Cnep all run into a vault when the aliens attack. You start off with 100 residents packed into the vault at the end of the trail you are defending. Each alien who makes it to the end of the road kills, or perhaps kidnaps (again, not explained) one of those people. The important thing is that the number of people stays with you as you play. So if you lose five people in the first level, then you will only have 95 people left on level two. That means that the early levels of the game are pretty important, as mistakes made when a player is still learning the ropes will haunt them and make later levels even tougher because there will be fewer “hit points” to lose. If all the people are killed off, the game ends. Thankfully, you can gain some people back by playing ten special bonus levels and scoring well.

The persistency across levels is one of the most unique aspects of Rush for Glory. This extends not just to the number of people you are defending but also to special upgrades that you can earn for exceptionally good play. Each level that is completed earns you between one and three stars. Those stars can be used to buy upgrades to towers or general advantages that carry over from that point forward in the game. They are extremely helpful and there are 40 to choose from. They need to be chosen wisely because earning stars is difficult and slow.

Some of the most useful upgrades that I found were the ones that increased the range of a certain type of tower, or the splash damage or how long it forced its special ability like freezing against an opponent. In most tower defense games that allow for upgrading, I generally try to improve my baseline turrets (normally a machine gun or equivalent) as much as possible and then concentrate on whatever tower slows enemies down – because there is always going to be one of them too. That strategy worked here too.

In addition to one of five towers, you also have access to several special abilities, like being able to put a bear trap down on the path to slow or kill enemies or the ability to warp time and freeze everyone for a brief moment. Stars can be spent on those abilities too. In fact, I found that the most useful upgrade I could have possibly purchased was one that made those bear traps reusable. Instead of making them one shot kills, they kept chomping for two or three enemies. Since the enemies march in a line for the most part, this means that spacing those traps evenly means that they can take out entire columns of bad guys just on their own, especially at lower levels.

One thing that was slightly frustrating was the fact that you could not control the path of the enemies. In many tower defense games I’ve played, you can place your towers in such a way that it forces the bad guys to run in certain ways, taking longer routes to their objectives and giving your towers more time to fire upon them. Here they just stick to the road. Also, towers can’t be placed very close to one another, which makes setting up a support system with, for example, a slowing tower setting up bad guys for a mortar’s splash damage attack more difficult. It’s not impossible to do, but you pretty much have to set those up at intersections where roads come together and other places that offer enough space. As a final little gripe, flying enemies don’t always follow the path. I realize that airplanes don’t need to follow roads, but in other tower defense games you could at least hit a button to see where the projected path of flyers will be so that you can add turrets accordingly. Sometimes here they would drift through a no-mans-land where you could not even take a shot at them until they joined the road again.

Each enemy you kill earns you gold which is used to buy more towers or traps. Gold, like everything else in Rush for Glory, carries through from level to level, making playing the special levels which tend to be very enemy-heavy a good strategy for building up your war chest. The first one that appears challenges you to mostly use traps to kill waves of bad guys, so if you’ve upgraded those traps to be reusable, then you can really rack up the money on that one.

Adding persistency to a tower defense game really adds a unique element. It makes the game almost Rogue-like in that you can never really relax. Does losing those 15 people on level three mean all is lost later? Only time will tell. There is even a power to make the people in the bunker more resilient which can help if too many bad guys are slipping through on you.

Rush for Glory won’t be blazing any new trails, but it does offer a few unique elements that tweak and improve the tower defense genre. Players like me who love this type of defensive gameplay will have a good time with Rush for Glory. It scores highly on value, and earns a very respectable 4.5 GiN Gems.