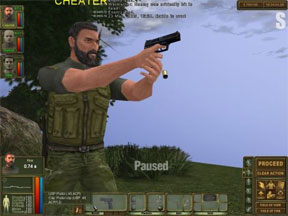 One of the first games I played years ago when I upgraded my game machine to a blazing fast 486 processor was Jagged Alliance. The slick 2D graphics really ate up my processor, and a lot of my time as well. The combination of turn based fighting and hyper realistic weapons made the game very attractive to a lot of players.

Since then many have tried to capitalize on the popularity of the original game. In addition to the official Jagged Alliance 2 title, there have also been some multiplayer releases as well as some fan created modifications, like the semi-recent Wildfire extension. But through it all, the core gameplay remained unchanged.

Brigade E5: New Jagged Union aims to change all that. First off, I have to say that Brigade is not a real sequel to Jagged Alliance, though it does its best to copy every aspect of the game, aligning itself as close to the original as possible without getting sued I suppose. Things you probably remember from the original series like the little questionnaire where aspects of your main mercenary’s personality are revealed are present here, so you can figure out how you would get a cat down from a tree — climbing up, shooting it, or burning the tree down. Stuff like that.

Like the original game, Brigade E5 puts your primary guy (or girl) into the middle of a fictional South American country, this time called Palinero, that has slid into armed conflict. Unlike JA, this title only gives you six choices as to your character’s looks. And each one of them happens to have a stereotypical accent based on where they are from that borders on being ridiculous. The Indian guy looks cool, but sounds like Apoo from The Simpsons for example. There are also some problems with the opening cut scenes. Even if you choose a female character, you still look like a male when the game starts in the opening movie.

Ok, on to what is good about the game. You can tell that the developers really loved weapons, which is good because so do I. There are over 130 different guns in the game and each one of them is nearly photorealistic and looks great sitting in your mercenary’s hands. It’s great just to zoom all the way in and see how cool they look. It makes you really want to take them into action. Everything from H&K submachine guns to Remington shotguns to good old .45 American pistols show up here.

And the guns are all very realistic in terms of their accuracy. Guns in real life that are more accurate than others are reflected in the weapon’s stats. So something like a rifle will shoot accurately a long distance and do good damage. A shotgun might not shoot nearly as far, but if some idiot steps in a doorway and you happen to be there waiting for him at point blank range, well, its going to be a big mess. And you can modify the guns as well, adding scopes, taping clips together to make them double sided and even putting on silencers.

Once you get into combat, Brigade handles things a bit differently than JA did. Instead of a straight turn-based game where you have to spend action points, everything in Brigade is in real-time. Now before you turn-based lovers tune out, know that you can set up pauses to activate that more or less brings the game back into the realm of turn by turn play. You can pause the game when you see an enemy, when you take a shot, if you hear something strange, if you are wounded, if you see a grenade or many other triggers. Or you can pause the game yourself anytime you want to get a better look at the terrain.

The AI that you will be fighting is pretty smart and will use good tactics most of the time. Occasionally you can setup in a narrow hallway or on the other side of a doorway and the enemy will keep trying to rush you, which lets you easily pick them off if you have even moderate skill with your weapon. However, a lot of times they will try to do something similar to you. And you are always outnumbered, which makes things a little difficult. Plus, the AI acts like a human would as much as possible. One of my favorite missions in Brigade happened because I was camouflaged and using a silent weapon to snipe an enemy patrol. They were being hit, but did not know where I was, so they ran around looking for me while I took them out one by one.

The game has a pretty steep learning curve though. Early in the game you are restricted to just pistols and eventually shotguns because that is all the shops in Palinero carry. As you pass missions, the game magically starts to introduce better firepower in the form of SMGs and assault rifles to the stores, but your enemies start to get them as well. Still, it is a lot easier to play once you get your hands on an accurate SMG or even a rifle. Until then, you will have to make due with just your pistol collection and if you are very lucky, a shotgun for close in work. After that early stage of the game, things really break open for you. Ten guys would come after me in the woods and I would mow all of them down without taking a lick of damage. But before you reach that point, things are very difficult.

Like in JA, here you also hire mercenaries to fight on your side, though I was able to go through almost all the game without any of them. Unlike JA where you log into a computer and hire people, in Brigade you have to find them wandering around the map and then pay them to be on your team. There is a lot less personality in Brigade which unfortunately reduces the mercs to just generic stats. I would have liked to see much more banter within the ranks, personality conflicts and NPC reactions.

The plot of the game is fairly simple. You can either work for The Rebels, The President or The Smuggler faction. None of the three factions are completely in the right, which is fairly realistic. Basically you are probably picking the lesser of three evils, however you define evil. I actually found that if you balance your missions (take one from one faction and then one from another) that you can go through almost the entire game working for two of the three factions at the same time. You can’t be a rebel and work for the government as well, but you can be a rebel or a government employee and work for the smugglers at the same time. Not sure if you are supposed to be able to do that or not, but the game does let you.

Getting around the country is a bit of a chore because you mostly have to walk, which takes a long time, but you can eventually purchase a vehicle, which in addition to getting you around a lot faster, will also haul all your stuff. And you look so cool posing beside your military-style ride.

In the end, Brigade E5 is a fun game if you like guns and tactical combat. If you can get through the learning curve, then a lot of good fighting awaits. It’s not really up to par with the Jagged Alliance series, but might hold you over until Jagged Alliance 3 (fingers crossed) eventually makes it to market.