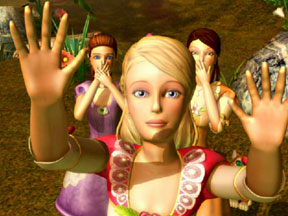 Barbie in the 12 Dancing
Princesses

If you are shopping for an excellent computer game for the young girls on your list this holiday season, it’s not Barbie and the 12 Dancing Princesses. Really, the best that can be said about this game is that the box is pink and rather aerodynamic. If you want to throw it at the cat that just knocked over your Christmas tree for the third time it works great, but after that, it’s all downhill.

Now let me back up a few steps. If you do have any young girls in your life, you have probably already found out that the yearly Barbie movies released directly to DVD are better than anticipated. So too were the first three related Barbie computer games, Barbie as Rapunzel, Barbie of Swan Lake and the Princess and the Pauper.

These games thoughtfully started where they movie left off and led through a series of enriching tasks including logic puzzles and games, often with a touch of music or art.

I highly recommend these if you can find them and if you can still get them to run on your computer (the Princess and the Pauper has a few bugs that didn’t get entirely ironed out but it still holds together pretty well in the overall gaming experience category). The last two, however, do not follow this promising start.

The downhill slide started with Barbie and the Magic of Pegasus and continues and more so with Barbie and the 12 Dancing Princesses. They completely abandoned all of the software development concepts that had gotten them to that point. Gone were the rich and detailed graphics, the simple and charming animations, in their place remains crude and blocky 3D animation.

Close ups of the characters’ faces look exactly like the sort of Barbie knock-off you would find in the dollar store bargain bin.

The creative thought required to extend the story line was abandoned in favor of rehashing the story from the DVD, often with omissions or changes that were quite glaring (especially to kids who have seen the movie dozens of times). Gone too were the interesting and thoughtful games and puzzles to be largely replaced by reflex games that were frustrating and gave little satisfaction to the kids or their parents.

At least in Barbie and the Magic of Pegasus my 6-year old could accomplish all of the tasks. Barbie and the 12 Dancing Princesses soon had her in tears trying to accomplish a task to jump a kitten over various obstacles so after I calmed her down and sent her out of the room, I spent half an hour trying to play the game myself and managed to clear only one obstacle in that time.

After this I sat down and talked to my daughter about what had happened and so the one learning experience she did get out of the purchase of Barbie and the 12 Dancing Princess is that sometimes companies make products that just aren’t any good.

She wanted to know why and in this case I just didn’t have a good answer for her.