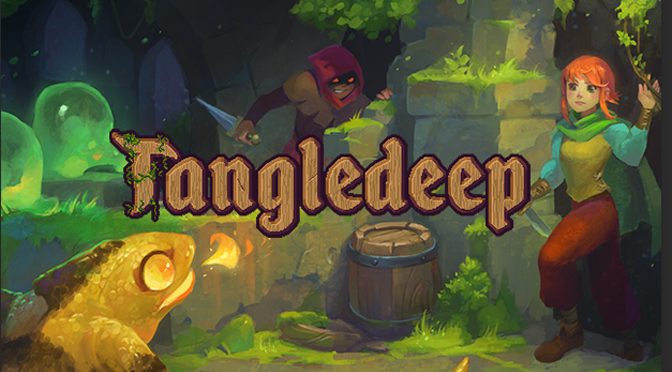 Roguelike dungeon-crawling games are fairly common titles- players who can appreciate a game with rewarding strategic elements and perma-death have probably already tried games like ADOM, Shiren the Wanderer, Nethack, and more. So is Tangledeep as deep as its name implies, or is it just another shallow downloadable game to dot your Switch’s home screen? Let’s find out. 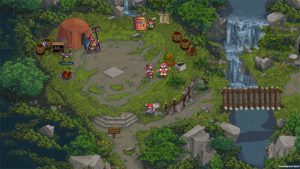 Tangledeep has a relatively simple story of a protagonist who wants to see the surface, but a constantly changing labyrinth stands between her and her goal. The story is all right, nothing really to write home about as it is largely just an excuse for the adventure to set forth, and as a framing device, it does its job. The town you start out in has a variety of benefits players can take advantage of- like a bank to carry items from one playthrough to another (if you play the normal difficulty, you’ll be visiting here a lot) as well as a place to get little quests you can accomplish as you scour the labyrinth which will yield additional XP, JP to learn new class skills, or items. Various shops are also around, and you can even plant trees which will provide you with various items (even in future runs). 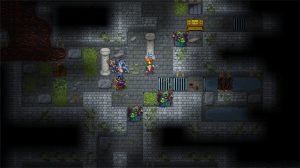 After exploring the town, you can easily approach the labyrinth. One thing players will immediately notice is that moving and attacking are all counted as turns. Taking a turn while in the dungeon will allow all enemies to take their turn- this should sound familiar to people who have played games like Pokemon Mystery Dungeon or Izuna: Legend of the Unemployed Ninja. Careless movement or actions may end with you being surrounded to meet a disappointing end, which can be decent setback since permadeath looms around almost every corner.

There are a variety of classes you can utilize that modify how you more safely approach different situations, each with their own unique flavor. You select feats when you begin that will additionally modify how you play, plus the ability to multi-class to mix and match passives from the different classes. As you level, in one run of the game you may play one character who can stack damage-over-time effects like bleed or poison to gain an upper hand in combat, then the next play as a character who captures and trains monsters to use as pets who also level and have unique attributes and skills of their own. 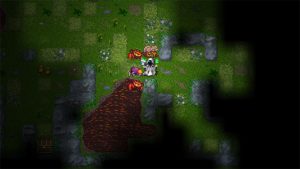 Melee, ranged, having other creatures fight for you, there’s a lot of flexibility in what Tangledeep offers for different runs, and there’s tons of different items with varying effects to find as well (including set bonuses), meaning replayability is high- and this isn’t even getting into bonus dungeons that can let you upgrade your gear, or the daily and weekly challenges you may partake of, as well. 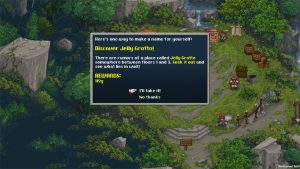 There are three difficulty modes in Tangledeep, each one for a different type of player. Heroic Mode, noted as the proper way to experience Tangledeep, is a mode with permadeath- so if your HP hits 0, your character dies and all items that weren’t banked are gone forever. Adventure Mode gives less experienced players more wiggle room, as if you lose all HP, you’re instead dragged back to town. Half of your money, unspent JP (job points, used to upgrade class abilities), and XP towards your next level will be taken from you. Lastly, there’s Hardcore Mode, which includes Heroic Mode’s permadeath, but all of your adventure is erased should you die. Heroic at least lets you carry over town progress and items stashed in your bank, making Hardcore closer to modes you may have seen in games like Diablo II and III, Torchlight II, and the like. 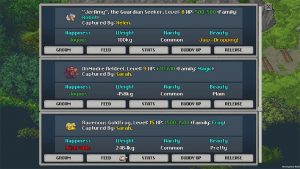 One thing to note is that Tangledeep is fairly difficult- you’ll likely die a lot if you’re not paying attention or haven’t yet had something explained to you (the in-game tips are actually insanely helpful, for once), but for the most part you shouldn’t die in ways that feel unfair- you won’t be running into situations like Nethack with its Wands of Death enemies who just kill you instantly and there’s not a lot you could do about it unless RNG was already on your side. Difficult but not unfair is pretty hard to balance, and Tangledeep seems like it hits the nail right on the head.

[amazon asin=B079Z9Z6LY&text=One of the cool things about Tangledeep is the soundtrack. Get it for your personal playlist from Amazon!]

Of course, each player is different, and Tangledeep approaches difficulty in a relatively unique way with special modifiers you can activate. These modifiers can make the game easier, such as one that restores health while outside of combat or one that keeps corral pets from dying, to ones that increase the challenge such as halving your JP gains. If you want to more finely tune the challenge to your liking, this is an easy way for you to do so. 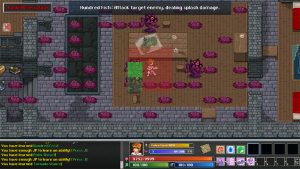 A lot of the initial choices of Tangledeep are made before the player actually experiences any of the combat, and for how equally deep the systems are, especially when combined with different unlockable passives as you progress, it can be quite baffling to a newcomer. Most every roguelike is similar to this in some fashion, however, in that you have to play, figure out what what abilities and items work best with one another. This can be a negative or positive depending upon the player (some people enjoy throwing their head at a wall until the wall comes down and it clicks), though many with experience of Roguelikes certainly don’t mind a learning curve assuming the game is fun and the challenge is fair- both of which are things Tangledeep does easily. 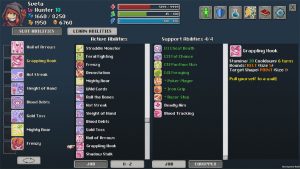 The menu system of Tangledeep originated from PC, and you can tell it quite plainly. There’s a ton of information on single screens that may take new players a little while to navigate more fluidly, and pressing a button three times to close the map, among a wide variety of tiny niggles may seem asinine, but it just generally slows down play. Those who enjoy playing in handheld mode- rejoice! There are touch controls fully implemented that make navigating Tangledeep’s menus a breeze and quite intuitive to boot. 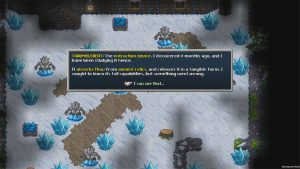 The visuals of Tangledeep are a superb pixel art style with bouncy, lively animations. The characters look as if they would fit at home right between Chrono Trigger, Secret of Mana, and other RPGs of the 16-bit era, and are quite pleasing to the eye. The soundtrack is incredible, featuring excellent tracks that sound as if they came straight out of Secret of Mana or Banjo Kazooie- this may be due, in part, to Hiroki Kikuta and Grant Kirkhope, composers from Secret of Mana, Banjo Kazooie, participated in giving Tangledeep its signature sound. Norihiko Hibino, of Metal Gear and Ace Combat fame, also participated in this game’s OST. All of the tracks make for a fantastic piece of listening, from the beginning, up until the final battle. 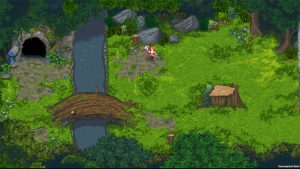 Tangledeep on its intended difficulty has some minor progression elements that will allow you to bank items and cash, keep monsters in a corral, and plant trees that can provide fruit for future playthroughs. Dying may set you back, but it can often be seen as just a minor setback on the way of trying out a whole new build given the plethora of options Tangledeep provides. There are side areas and equipment dungeons you can use to upgrade your gear, a hidden boxx, as well as a New Game + mode unlocked after beating the game that makes the game more tough, but yields better items. 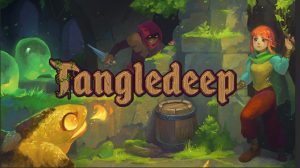 Overall, Tangledeep is an extremely strong Roguelike with tons of underlying interwoven systems. This can make it somewhat inaccessible for new players, but sticking with it will yield what is easily one of the most rewarding Roguelike titles in recent years (which, we’ve been getting more and more great ones lately, so this should say something). There’s a tremendous amount of variety and strategies to employ should a player be able to get past the learning curve. For players with little patience in dealing with permadeath, or in reading through a variety of tool tips to understand what all different sorts of abilities do, Tangledeep may simple not be your kind of game. Those who are Roguelike curious, or enjoy game systems with huge amounts of depth and complexity, will likely enjoy everything Tangledeep can throw at them, and any player in between can more easily tailor the difficulty to what would make it most adequate for them should it prove to be too hard or too easy. At only $20, Tangledeep will keep you busy for hours on end should you even remotely enjoy Roguelikes, RPG character development systems with multi-classing, and a fearful need to hoard items in the bank.