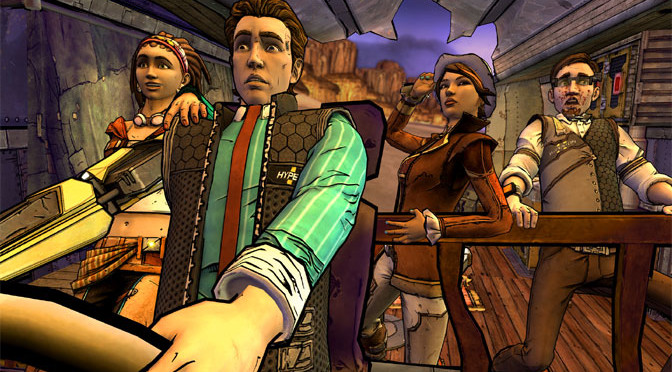 Tales from the Borderlands

Borderlands is a universe that’s known for sardonic, referential humor and one very addictive loot system for an FPS-RPG hybrid. When you take away the loot system and focus on the humor, lore, and characters, can such a game actually hold up well-In a world where there ain’t no rest for the wicked, can the quality of writing hold the attention of fans who came for the shooting gameplay? Yes, if Telltale has anything to say about it, Tales from the Borderlands absolutely can.

For those who are unaware, Tales from the Borderlands is set after Borderlands 2 (including characters from the Pre-Sequel, such as Athena) and follows the misadventures of conwoman Fiona and high tech company-man Rhys.

The game begins with Rhys receiving a sudden and unfortunate demotion to Hyperion janitor when he, instead, expected to be advancing higher in the company. To get back at the man who stole his promotion, Rhys sneaks some information about an upcoming business deal and attempts to take it for himself. Meanwhile, Fiona is participating in a con involving a fake Vault Key (the Macguffin in Borderlands 1 and 2), and you follow her as she sets up her mark and attempts to deal with anything that may mess up the deal.

If you can’t tell, these two situations are directly related, and the re-telling of these blunders from skewed perspectives is one of the biggest treats in the game. Rhys, for example, commonly makes himself sound more composed or heroic than he actually was, while Fiona conveniently leaves out anything that would make it sound as if she made a mistake. These two characters are your protagonists along the 12 hour or so adventure that will form your time in Tales from the Borderlands, and they fit in perfectly with the types of people shown in Borderlands 1, 2 and The Pre-Sequel.

The characters tie together the storytelling in a really great way: Their blunders will typically highlight the action that Borderlands is known for (you haven’t lived until you have a pew-pew finger gun fight against Hyperion accountants), while injecting the comedy in a very natural way that subverts some tropes while openly embracing others. There’s a huge amount of creativity to the world-building in Tales from the Borderlands, allowing the writers to embrace and utilize humor for more than passing references (or completely out of left field mission by Face McShooty) as per the usual Borderlands style.

The end result is great: While you only really control the characters for inputting button commands or the occasional analog stick input during cutscenes, the action still feels very intense to the player as it’s so colorful and ridiculous. At least, it will still seem very entertaining if you’re not taken aback by this entire manner of presentation- some people will actually want to control their characters running on foot during a motorized death derby, while others find the pratfalls and constant screw-ups by the characters in pinch situations hilarious.

Of course, seeing prior playable characters along for the ride is one of the attention grabbing aspects of Tales from the Borderlands. Early on, Zer0 will make an appearance and will retain his natural mannerisms and speech from Borderlands 2. Similarly, Athena from Borderlands: The Pre-Sequel, Scooter, and even Handsome Jack appear with roles and dialog that perfectly suit everything you would know about the characters. Of course, the less experience you have with the Borderlands franchise, the less of an impact this would make, though there is still enough to entertain those who may have only played Borderlands 2. Telltale does a fantastic job of explaining who a character is and also of explaining why they’re probably trying to kill you at that moment; those without intimate knowledge should never feel lost.

[amazon asin=B00WFDBOVO&text=Start your amazing adventure with a Takes from the Borderlands download code from Amazon.]

Not all of the chapters of Tales from the Borderlands are so beautifully interwoven with drama, action, and comedy, however. The first couple chapters are more full of character-building for the two leads, Fiona and Rhys, and as a result some of the gags are much more visual and can be hit or miss as a result. As the game progresses past the second chapter, though, the game really comes into its own as the comedy and drama begin working with one another like the most heavenly of peanut butters and jams. By the final chapter, players will be experiencing harsh physical comedy and tragedy (comedic tragedy?) back to back, and it will never feel out of place- the characters truly grow into their own, and the drama and hilarity never stops.

While the overarching storylines from chapter to chapter isn’t exactly the most complex plot ever written, it still does its job exceptionally well despite the simple character motivations. Most characters in Borderlands are in it for one thing: Loot. Rhy and Fiona’s quest is primarily to collect as much capital as possible and they inevitably get dragged, by Murphy’s Law, into something much larger than what they initially planned.

The branching story paths are nowhere near as complex as, say, Life is Strange, though if you had any experience with Telltale’s The Walking Dead games, you probably already had that inkling. However, it was nice to see that some events and dialogue in even the final chapter was a bit different based on your past interactions with other characters, even if the aforementioned characters haven’t been seen since chapter one or two.

Overall, Tales from the Borderlands is an excellent inclusion to Telltale’s newest licensed games. For fans of the Borderlands franchise, this game is absolutely a must-play. The attention to detail and respect for the source material is unreal and makes this a notable entry in the series. For those who aren’t fans of Borderlands, but enjoy games like Sam and Max, Life is Strange, Telltale’s The Walking Dead, etc., this would still be an easy recommendation as the fan service isn’t so esoteric you wouldn’t be able to discern what is happening or why, and would easily provide a great experience if you want to laugh and have a good time.