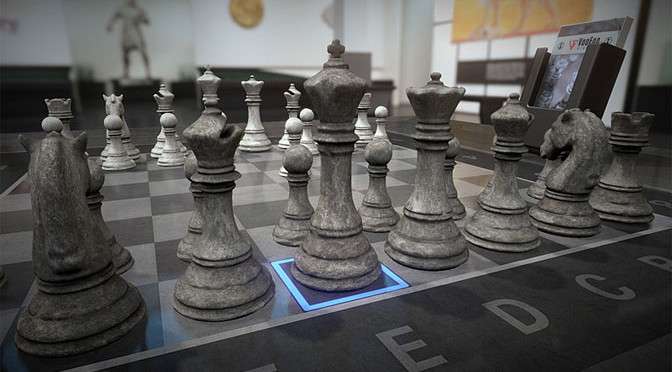 Pure Chess for PlayStation 4 is pure fun. This video chess game does not have the chess pieces fight or grimace but they move smoothly, make a slight scraping sound like a real board and offer some great graphics and classic challenges. Some of these challenges are true chess conundrums of how to achieve checkmate in one, two or three moves. These challenges are perfect if you only have a limited time to play and you want to improve your chess. They sharpen your ability to think more than a few moves ahead.

Made by a British company out of Birmingham called VooFoo Studios and distributed by Liverpool based Ripstone, Pure Chess offers different sets, multiple soundtracks, and a variety of backgrounds to match your mood while you play. You can also view the board from multiple perspectives, both from above and at chess level.

This change of perspective and the detail of the sets make for a better immersion into the game. Chess is a game of both tactics and strategy but the tactile part seldom gets much attention. Looking right above a black and white board, your pieces within arms reach, the opponent’s pieces encroaching on the little squares of territory gives the player a visceral response to a two dimensional battlefield.

The different environments available in Pure Chess reflect what is great about chess in real life. You can play in a park, a library and even a museum. This change of venue shows that the developers care as much about presentation as they go about playing chess and it makes for a pleasant experience.

Playing against the computer can be done on a single game basis or in a tournament. Like most chess games you can set the level of difficulty. I applaud the way you can set the time available for moves if you want a quick game.

An attractive part of the game is playing with the different sets. Disappointment hit me concerning the famous walrus ivory Lewis Chess Set though. This chess set, found in 1833 but probably carved around 1200 by a Scandinavian was featured on the advertisement video but was DLC. This chess set is famous in its mystery and the obvious mirthful tone of whoever carved it. There is a berserker bighting his shield and a Queen aghast at some spectacle with a hand to her face. I was excited that the Lewis Chess Set as well as several other beautiful sets were featured in the game trailer, but it seems like false advertising to find only three basic sets are available with the initial game and everything else is DLC. The DLC for Pure chess offers a variety of additional settings and more sets, which is great, but the trailer should have made it clear that they were DLC.

I think scheduling on-line opponents would make this game more attractive, but there isn’t a true online multiplayer option. Playing against a computer, either set at a low level you can beat or a high level that always beats you is a pallid experience compared to that of another human being. The famous Turing Test aside we don’t play chess to compare ourselves to computers but to compare ourselves to others.

Chess is at its best when you can find someone to play in real life. Pure Chess is what you can do when you can’t find that person.  Pure Chess earns 4 out of 5 GiN Gems.