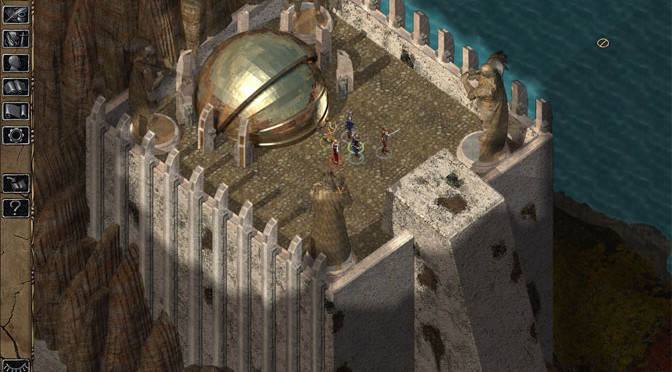 Baldur’s Gate II: Shadows of Amn opens shortly after the events of Baldur’s Gate and continues the story of the protagonist, Gorion’s Ward, whose unique heritage has now gained him (or her if you play as a woman) the attention of Jon Irenicus.

(Thank you Wikipedia for helping me spell all these crazy names.) I did not get to play this game originally as many of you probably have, so this was my first time jumping into the world of Baldur’s Gate, testing it out for gameplay on the iPad.

The game’s plot revolves around the protagonist’s encounters with Irenicus, and is set south of the events in Baldur’s Gate in the country of Amn, mainly in and around the city of Athkatla set in a medieval like style.

Bhaal, the God of Murder, was slain by an adventurer named Cyric, who himself became a god. But Bhaal foresaw his destruction, and walked the land before the other gods, leaving behind him a group of mortal descendants, whose later deaths, when they were slain by heroes, would fuel his rebirth.

The game’s protagonist is one of these offspring; but, through the choices of the player, may be either good or evil. The character grew up in the library fortress of Candlekeep, watched over by the mage Gorion. Imoen, who grew up there as well, became a close friend.

Baldur’s Gate has a tremendous number of characters and a deep backstory, which offers the player a rich experience in an isometric Dungeons & Dragons type game, in which you embark on a quest with either a pre-made character or one you custom design. Making a character starts with gender then appearance.

The race, which you can choose, ranges from human to gnome to half-Orc. After your race, you have you have to choose a class. Categories include fighters (such as warriors, barbarians, and mages), healers (such as clerics and Druids) as well as thieves and rangers. Each class has a sub-class, which specializes in certain areas. For example if you’re a thief, you have thief, assassin, shadow dancer, swashbuckler, and bounty hunter. Each subclass has different traits they can master, such sword fighting, or sneaking, or poisons. It’s quite varied and should make character generation fans very happy to get one that is “just right.”

Next is alignment, determining which side you’re fighting for good, bad, or neutral. Then there are sub-alignments in between, which allows you to lean toward a good or bad nature. Meanwhile, abilities let you strengthen what skills you’re character needs. There are six basic stats, each character prefers one stat to the others, which are: strength, dexterity, constitution, intelligence, wisdom, or charisma.

After abilities come skills, determining your character’s strengths in areas, such as weapons or your class’s skill. There are five levels of proficiency with a weapon, the first level giving you no penalties, while the next levels increase your stats or decrease negative stats. When skills are increased, efficiency is added to that skill.

Lastly comes your characters name and then the game begins.

The game is played from third person perspective and the screen, which does not need to remain centered on the protagonist, can be controlled with a swipe of a finger on the iPad. Areas are revealed as they are explored by the player’s character. A “fog of war” effect hides explored areas when the player’s characters move away from them.

The player can also change the formation in which the party moves. Clicking an area exit, such as a doorway or staircase, causes another area to be loaded. Clicking on the edge of an outside area causes the party to travel there; the game then presents the player with the World Map, from which, the player may select a destination.

Once in the game world, the player may recruit certain non-player characters (NPCs) to travel with him or her, though only five may do so at a time; depending on who is present in the group, bickering, romance, and side quests can result. NPCs in the party often talk with the player or with one another, and at times interject into the player’s conversations with others.

The player interacts with characters and objects by clicking on them. Clicking on the ground causes the player’s selected characters to move. The gameplay, though in real-time, can be paused, so commands may be issued to controllable characters, who will attempt to execute them when the game is un-paused. The game can also be set to pause automatically at certain times.

Dialogue is started by NPCs at certain scripted times, or by the player’s clicking on NPCs who are not immediately hostile. Don’t click on the ones who are immediately hostile, just kill them. When speaking to an NPC, the player must often choose what to say from a list of responses. Dialogue may lead to quests or important information. When the player clicks on a hostile being, the currently selected characters will advance to attack it. Information about characters, creatures, items, and buildings in the game environment is shown on a tool tip, which appears when you hold down over game elements.

The player can access sub-screens through the interface: area and world maps; the journal, which tracks important information, such as quests and the game’s plot; the inventory page, which is used to manage and equip items; the record screen, which is used to view information about, as well as level up, characters in the party; casters’ scroll screens, where spells can be inspected and memorized; and the options screen, where settings may be changed, saved-games loaded, or the game saved or quit.

There have been some issues for people trying to import the characters they created in Baldur’s Gate for the iPad into Baldur’s Gate II, so beware of that if you played the original Baldur’s Gate and want to move your character over.

Okay, so how is it? If you’re a Forgotten Realms fan or if you played Baldur’s Gate or Baldur’s Gate II: Shadows of Amn back when it first came out, love it, and want it on your iPad, then rejoice. You will most likely love this game. If, however, you don’t have a rich history with the game and you are younger and never played games like this back in the day, then you might find this all a bit tedious. RPGs have advanced considerably since the halcyon days of BGII, but this redo for the iPad stays faithful to the original. For some players that will be fantastic, but for others it will feel unnecessarily encumbered. Although, if you played the original you will find load times on this version to be a joy compared to what you had before. All in all, I’d give 3.5 out of 5 GiN Gems.