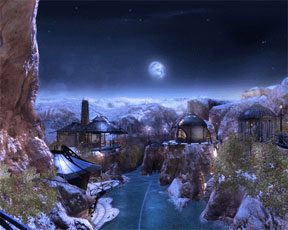 No puzzle game franchise is better known and respected than that of Myst. So any new submission will unfortunately have to meet some pretty high expectations from me. Myst IV: Revelations easily exceeds even those.

The game starts with Atrus writing you a letter ("Greetings, my friend.") concerning the fact that his sons, Achenar and Sirrus, whom he was forced to imprison some 20 years ago (back in the original game), were in fact still alive, and still in their prison worlds. Great.

You are then treated to a ride on a sort of suspended rail car, driven by Yeesha, Atrus and Catherine’s daughter, who was an infant during Exile (the previous game in the series). She must be like 9 or 10 now, which means that Uru (the attempt at an online Myst game), in which Yeesha is an adult, takes place well after Revelation. Anyway, as you enjoy the ride, you are instructed how to learn some of the basic interfaces, like the camera for taking screenshots for both your own amusement and for puzzle-solving reference.

And you will need it too, as many of the puzzles you must solve (since Atrus has got to go run an errand and leaves you to fix his life for him yet again) require attention to the minutest detail. Like most Myst puzzles, if you pay attention to what goes on around you (both sight and sound), you will have all of the information you need to solve nearly all of the puzzles. There are a few puzzles that require dexterity in addition, and with the mouse-click interface, which is a bit clunky for speed puzzles; those few can be quite difficult.

The interface is a bit of a departure from the static bubble that we have been using for quite some time now. You still stand in one place and turn around until you see the way you want to go or the thing you with which want to interact. However, I believe that you are in an actual 3D space, not in a bubble rendered from one. This makes the transitions into movie footage smoother, and allows for more motion within each scene. Overall, this is a good advancement, and well worth the 3G of space it takes up on the hard drive.

The storyline is the most immersive of all of the series, as it ties in elements of all three other games. Of course, as with all of its predecessors, it all ends up boiling down to a single decision, right or wrong, in which you decide how it all ends, good or bad. Of course, I had too see all possible endings, so once I’d solved it correctly I went back to a saved spot and played them all out, because I’m just like that. But I was so impressed with the acting in this game, that even the ‘wrong’ endings were a treat to watch.

The best and luckiest casting decision in all of computer game history has got to be putting Rand Miller in the role of Atrus. Originally, I’m sure he chose to play this role because it was cost effective, but now it’s like it’s not a Myst game if we don’t hear his voice at the beginning, or see him at some point during the game. Of course, now that Myst is a powerful franchise, Rand was no longer forced to play Achenar as well, nor make his brother Robyn play Sirrus, but instead got actual movie and TV actors to fill these roles. And Juliette Gosselin does a marvelous job as Yeesha – look for big things from her in the future.

Probably most impressive part of this game is the graphics. Never before have I felt like such a part of the Myst world. The landscapes look so realistic, I would swear that I was looking at live footage. It looks like someone at UbiSoft brought in their vacation photos from home, and then the designers got some ideas. The integration between the live actors and the backgrounds is nearly seamless, with only the occasional blip to let you know that those people aren’t really there.

Of course, when I say the graphics is the most impressive part of the game, I am not doing the sound any justice. The sound, in a word, is phenomenal. The background sounds, whether clanking machinery, rushing wind, flowing water, or blazing fire, make the realistic graphics more powerful tenfold. The detail of the sound is such that when you touch a surface, it will make a different sound depending upon what kind of material it is. It is this level of attention that has made the Myst series as great as it is.

The incidental music has always been a treat in this series. This time they employed a full orchestra and choir to bring you more fully into the Myst universe. The Peter Gabriel song, unlike the other song in Uru that just played on a radio in one place, is actually featured in a music video-type interlude at one point in the game, as well as playing over the credits. This level of exposure works just right, not under-used to be a let down from the hype, and not over-used, as it is a darn fine song.

It is mildly disappointing that the Cyan folks made the first-ever Myst game to earn higher than an ‘E’ rating, this being a ‘T’ for mild violence. But I really don’t see this game as any more violent than some scenes in Riven or Exile, but I’m guessing the difference in ESRB’s eyes is that those games involved only adult characters and there is a young girl running around in this game.

Lastly, as an added improvement, the limited edition of Revelation also comes with the full version of Myst III: Exile. They effectively eliminated the only major complaint I’d had about the game (that of the problems with disk-switching) by putting the 4-CD game onto one DVD. Revelations alone is well worth the $40 they are selling this edition for, so with the second game included, it is that much more of a bargain.

Revelations continues along in the fine tradition of the Myst line, bringing us great puzzles, fabulous story, and breath-taking graphics and sound. It quite handily earns all 5 GiN Gems, and I expect it to come out with some of our Game of the Year awards.