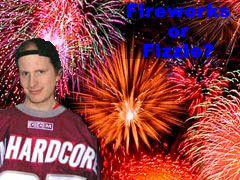 SPOILER NOTE: The following commentary contains major plot spoilers for both Halo 2 and Metal Gear Solid 3: Snake Eater. For anyone who has not finished the main storyline for both titles, I suggest you refrain from reading further. You have been warned.

There, now that I have that out of the way, I can get to what I want to discuss this week. Over the last two weeks, we have been treated to a slew of great games. As if GTA: San Andreas wasn't good enough, the following weeks saw the arrival of both Halo 2 and Metal Gear Solid 3, two titles that I have been looking forward to for a long time. Three years in fact, as the previous releases in these wonderful franchises came out in 2001. Halo came out of nowhere and wowed gamers everywhere with its immersive gameplay, amazing AI, and the most robust multiplayer modes to come out in the pre-Live Xbox era.

When Metal Gear Solid 2: Sons of Liberty came out for the PlayStation2, I was also enthralled by its gameplay, as well as the storyline. I should probably say the storyline to start off with. However, once we got to the fact that Raiden was the main character, strange moments like Otacon admitting he had an affair with his stepmother, and the big question of who the heck the Patriots are left me wondering "Why?"

Now three years later, I am going through the same dilemma, but this time, it is completely reversed, and Halo 2 is the game that is leaving me asking "Why?"

Why was the ending so abrupt? Why did it just end the way it did? I know that going through 15 levels is quite a task (it took me about 15 hours to finish it), but still it felt incomplete. Maybe it was because I had a case of "Raiden Syndrome" since the Covenant Arbiter was made a playable character. Granted he was nowhere near the whiner that Raiden was, and I was able to continue playing as the Master Chief, but just when I was expecting to do one more stage as the Master Chief as he was going to take out the Prophet of Truth, all I see is a cutscene where he is asked, "What are you doing?"

His response: "Finishing this fight."

What the heck? You mean to tell me that I have been screwed over one last mission just so Halo 3 can be released on the Xbox 2? I know I'll be the subject of ridicule and hate mail by saying this, but the single player campaign felt incomplete.
Not to say that Halo 2 is a bad game; it's an amazing game. It's just I wanted to feel a sense of closure. This was more of an Empire Strikes Back ending.

Now Metal Gear Solid 3 on the other hand gives me the ending that I wanted after the disappointment of MGS2. Aside from the obvious fact that the "Snake" we play as will eventually become Big Boss, we find out a few surprises that make more sense that ever.

First of all, I now know who the Patriots are. Or should I say"the Philosophers! It turns out that the original Philosophers were a secret committee with representatives from the US, Russia and China who controlled everything, but the original members, called the Wisemen's Committee, were all dead by the 1930s. Over time the group became fragmented, having no sense of good or evil at all, eventually becoming more of a consciousness. They had $100 Billion dollars stored away, called the Philosopher's Legacy, and Col. Volgin was the heir.

That leads us to both Ocelot and the Boss. We already knew that Ocelot was a Patriot spy from the last game, but we also find out the reason the Boss "defected" to the Soviet Union was to get her hands on the Legacy. The Boss was the daughter of one of the original Philosophers, and just like Olga, her child was taken from her by the Philosophers immediately after giving birth (which occurred during D-Day, 1944).

Rumors are now circulating that Ocelot might be her son, which would make sense since Ocelot appears to be near the age of 20.

In any event, we find out the true reason for the Boss' actions, and in what I consider to be one of the best final battles in game history, I obtained a sense of sympathy towards the Boss as I'm facing her to the death.

I even hesitated for a second before pulling the final trigger. I now know what Jack/Snake/Big Boss was going through in the end, and believe it or not, the game's final scene can bring even the hardest gamer to tears. It might go down as one of the best endings of all time.

Still, even with my disclaimer of giving away the ending or any other major plot spoilers, I will still leave many more for those wanting to finish MGS3, but then again, if you read my warning, you wouldn't have been spoiled by my comments anyway.