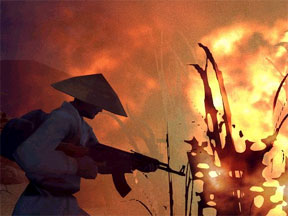 One could argue that the Vietnam war is the darkest time in American history. Thousands were killed over a period of more than a decade for a cause most of them didn”t believe. Young men left their homes for a land they knew nothing about, some never to return to their families or significant others. Those who did make it back were hardened individuals never to live their lives like they did before. And who was exempt from going to Vietnam? College students – or the people who had money to go to college more specifically. This meant rich kids, mainly white, got a get-out-of-jail free card while many poorer African-Americans had to go and die.

Recently, many video games have come out set in Vietnam. Some, like Men of Valor: Vietnam have chosen to focus more on the bravery shown by the young men who went over to Vietnam in that time. Others, like Shellshock: Nam 67”, seek to make the brutality of Vietnam their selling point.

The game”s storyline, though horrifying as promised, is quite hollow. You play as a nameless soldier as he treks through Vietnam. The plotline rips off several Vietnam movies, Apocalypse Now being the main victim, as throughout the game you will hunt a mysterious general whose character is quite like the one Marlon Brando played all those years ago. On your way to finding him you will see other horrors of war, including suicides by cornered Viet Cong, executions of surrendering soldiers, and the rape and subsequent murder of a Vietnamese prostitute.

These scenes would have meaning in the grand scheme of things if the rest of the gameplay wasn”t so hollow.

Instead the scenes come off as degrading shock material, made to make your blood jump and little else. In a sense the game brings up memories of some of the lesser Vietnam movies from the 80”s, like Hamburger Hill and Platoon Leader, where the directors tried to make up for the script”s lack of depth by just throwing in as much blood and guys as possible.

And while these cut scenes might be realistic, the promise of realism is simply not carried out anywhere else in the game. Your character only gets to carry a few weapons at a time, but that”s where the realism ends. You can regenerate your health by just standing around in an area you all ready cleared and waiting till your meter fills back up. Also, I don”t think the Viet Cong were this dumb as an army. The digital enemies you fight in the game run right at you or the stand in the same place the whole time.

This lack of realism makes most of the game feel like a pretty lame shooter. Though some of the environments you fight in are pretty interesting and it looks like a real war with all your comrades fighting at the same time, the whole process quickly becomes dull.

The fire fights lose a lot of their zest when it feels like you”re just shooting at targets as opposed to real thinking people. These problems combined make the game way too easy, thus robbing you of that "kill or be killed" feeling you”d get through a good shooter.

To make things feel really repetitive the levels rarely have you do anything different than get from point A to Point B. Occasionally you”ll have to defend a base, but it’s still the same kill-everything-in-sight gameplay as before. When the game really goes out on limb is when it asks you to do a stealth mission. Not only can you just get through the level guns blazing, but even if you wanted to sneak around like the game asks you to there”s not a single stealth mechanic built into the game.

In attempt to shake things up you”ll get to wander throughout a base camp between every missions. Though this seems like something that might add to the realism it really just becomes annoying down the line, as the base camp just provides one more load screen for you to wait through. In the base camp essentially all you can do is talk to other squad members and trade things with them. The characters themselves are boring, and the stuff you get is pretty trite. You can get several almost-nude pictures of prostitutes, and you can even get your way with a few of them…all though you don”t see anything when it comes to that.

The graphics and sound keep the game”s mediocre tempo going perfectly. The visuals look washed out and the character models are all too bland. Animations are stiff and unrealistic, further taking you out of the game. The sound bits sound all right, as the voice acting is decent and the licensed music used within the game is actually quite good. Where Shellshock fails in this department is that the sound effects are too few, so the enemy soldiers will repeat the same three or four phrases over and over again until you are driven absolutely nuts at the sound of them.

Shellshock really has nothing much to offer. In addition to being lackluster the game is also short-lived, clocking in at a little less than six hours. The gameplay is just so brainless that soon all you notice are the disgustingly violent cut scenes, making the game feel more like a snuff film than a shooter. Do yourself a favor and ignore this one. You have better things to spend your money on.’, ‘Oh yeah, that”s nice for the kids.