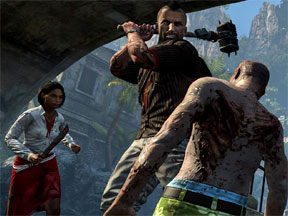 The original Dead Island game burst onto the scene just when the latest wave of zombie love was breaking, which was a very good time for it. And it was different from just about everything else out there. Whereas almost every zombie fighting title from little PSN games like Dead Nation to major blockbusters like Left 4 Dead were basically rail shooters with lots of guns, Dead Island let you take your war with the undead hand to hand. When combined with a beautiful open world, it offered quite a fun alternative to everything else out there. Despite some flaws, just the juxtaposition of the sunny tropical paradise with the hoards of undead shambling around was worth the price of admission.

Fast forward to today, and the love of all things zombie is still in full swing. Enter Dead Island: Riptide, the sequel to the original game, which more or less acts as a continuation of the first one. And that in a nutshell is the problem. There isn’t too much different about Riptide from the original. Where we were willing to forgive the flaws of the first game because it was something new in the genre, Riptide is nearly the same. All the flaws of the original game are still there, yet we are not given much new. Yes, the tropical paradise is still cool, even though we are on a new island called Hanoi now. Yes, the emphasis is still on bashing and cutting the undead, though guns play a bigger role this time. And yes, we still have the same characters (plus one new addition) and the same skill trees. But we also have all the bugs of the original game too, the clumsy combat (multiplied here unfortunately due to new enemies), the endless FedEx quests, the crazy respawn rates (though this is toned down somewhat) and the general lack of a credible story to move the plot along. It’s a lot harder to forgive these old sins with a sequel.

The game starts out with a pretty big bang, with a navy ship being overrun by zombies and your chosen character forced to fight them off. Guns and ammo are plentiful, as are interesting weapons. You can import your character from the first game, or start a new one. If you start a new character, then you are leveled up fifteen times, meaning you can get pretty far down anyone’s skill tree if you feel like trying someone new. In the original game I played Sam B, the big rapper and bashing specialist. So this time around I tried Purna, figuring I would try a gun-centric character. Unfortunately, and especially for me, the ship level is basically a tutorial. You are soon thrown onto the island and suddenly your arsenal consists of boat oars and pointy sticks again.

Needless to say, I was fighting a huge uphill curve with Purna. Here I was with all these firearms skills and no gun. As a reward for an early quest I was given a nail gun. Yes, the kind you would use on a construction site. And yes, killing a zombie with a nail gun is as hard as you think. You’d have about as much luck with a heavy stapler. The fact that you are only given a few nails as ammo, and buying more cost something like $300 PER NAIL, a kingly sum in the beginning of the game, meant I was already starting to hate Riptide. You can at least recover your nails after shooting them, if you can find the dead zombie in the hoard that you dropped with your nail gun, or wherever it landed if you missed. Later on I was given a flare pistol which was surprisingly helpful thanks to a skill upgrade that made burning damage last longer. But it took lock picking a level three box (a skill on a tree other than the one with all the guns) to find a heavy pistol which really let me start to rock.

Purna can of course use any weapon she finds that is not too high in level, so I ended up with sickles and baseball bats and all that. I was basically Sam B again, only without any of his bonuses. But it was enough to get by while trying to find more firearms.

All the zombie enemies from before are on the new island. So you will see chargers, spitters and boomers, and of course lots of low-level infected and the occasional thug.

There are also areas on the island called Dead Zones that you are not supposed to go into alone. These are basically closed maps, like a walled-off bungalow or a cave that is filled with very high-level undead. You are supposed to tackle them with a group, though I was able to do most of them on my own. The one thing about dying in the game is that there is no penalty for doing so other than a cash hit. So feel free to explore all you want. The game is quite generous with awarding experience points, both for killing zombies and completing quests, and since you don’t lose any of it with a death, you can try some crazy stuff and it will work out more times than not. If not, just try again.

Combat in the game is still a bit clunky. Each enemy type attacks the same way as it did in the last game, with most of them simply charging straight at you. So when an undead runs up to you, all you need to do is kick it to throw it off balance and then smash it with a club. Once you get the power that lets you make a coup de grace it’s even easier. Just knock them over and then jump on their heads. Numbers is all the zombies have on their side, more than enough to hide a primitive combat engine.

If you are like me and Purna, you might try getting off headshots as the undead run in for an extra challenge. And pf course special undead like bombers can’t be attacked close up since they explode, but you will figure it all out pretty quickly, or remember the patterns from the first game. The only time it really gets challenging is when hoards of zombies are coming at you. Then it’s best if you can seek higher ground or lay down a flame wall or something. There are enough weapon types that you should be able to develop strategies for different situations. I never felt challenged unless too many of the really fast runners came at me at the same time.

One new development in regards to combat is the fact that you can no longer drown zombies. I thought it was odd that zombies could die in kiddie pools in the first game, but it was an effective combat technique to knock them over into water as they would often die before they could manage to stand back up. Now zombies have remembered that they don’t actually have to breathe. There is even a new type of zombie that lies face down in the water before springing to life and attacking anything that gets too close. These are probably the most annoying of enemies because they can actually jump up on your boat and attack you. If you are playing alone, this means you have to stop the boat, jump over the side into the water, and then attack the zombie since you are helpless when driving. That is a POOR gameplay element that should have never made it into the game. You should be able to shoot and drive at the same time, OR zombies should not be able to leap up into your moving boat.

When driving a jeep, like in the first game, you are basically inside a tank that can roll over any enemy. In a boat you are little more than a defenseless target, making boat travel worthless, and in fact, counterproductive. Other than story missions that force you into boats, I would avoid them all together. How I longed for the Far Craft 3 boat mechanic which was so much smoother and even featured mounted weapons for extra defense. Sure you had to stop to fire most of them, but at least you didn’t have to jump over the side and draw your knife to defend yourself from an enemy that leap out of the water and started punching you.

Crafting is huge in Riptide. Again, like the first game, you can make some fantastic weapons from spiky baseball bats to electrified knives to acid sickles. You just need to find or buy the recipe and then collect the needed parts. You have an unlimited inventory for crafting items, so you can carry 15 bars of soap, 22 bottles of liquor, 34 laptop batteries and hundreds of other items without penalty. In fact, other than for the occasional rare item, I wonder why they make you collect anything at all as you will end up with more than enough stuff to literally make anything many times over by the middle of the game.

I did play the game with others, and though I dislike that style of play for a non-MMO, I will say that hanging with a group makes everything easier in Riptide if nothing else. That is, if your group knows what they are doing. I ran into quite a few idiots who didn’t. If you are lucky enough to have a group of friends you know come and play with you, then that’s pretty awesome. But the game is so weighted in favor of multiplayer that it really hurts those who want to play by themselves. It’s not like Borderlands where you can go through the whole game with just your character, or with friends, and the gameplay is about the same. Here you are really screwed if you try to go at it alone. That’s probably why the PC version keeps defaulting back to "open game" when you try to load up your last save. It really wants to force other people to come into your world or you to hop into theirs because, I think, the developers know how crippled you are just playing alone. Even your character complains from time to time. If Purna yelled at me just one more time to ask, "Any idea why I am doing all this on my own?!?" I was ready to plunge her into a zombie hoard and go have a snack.

Riptide isn’t a bad game. But almost none of the flaws of the original have been fixed. These were well-known and well-publicized flaws, and there was a lot of time between games. So I’m not really sure why Techland didn’t concentrate on fixing them. In any case, the melee combat zombie adventure has been done before, by the original game no less, so we can be more critical this time. Dead Island: Riptide earns 3.5 GiN Gems overall. That’s not too bad, but its major flaw is in the gameplay department, so it may not be for everyone, especially if you tend to favor single-player adventures. Perhaps in the next Dead Island, if there is one, we can actually see some improvements in the fundamentals. Otherwise it will just be another resurrected version of the first game, and undead flesh starts to stink if it hangs around too long.