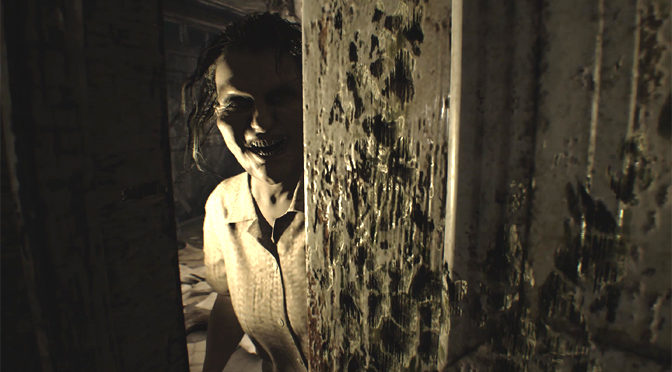 A true horror masterpiece Resident Evil 7  biohazard satisfies any fan of the genre and fans of the Resident Evil games. A first person survival horror Resident Evil takes the player on a journey wrought with fear and moments of shock. For those who can stomach watching a twisted woman cut off your hand with a chainsaw then this game is a must. Blood, gore, evil family, cannibalism, along with lots of psychological terror, and a first person perspective makes this a game worth playing.

The boss fights are also outstanding and the main characters are down right creepy and not to be taken lightly. They may seem to be making Ethan welcome but in a sick and twisted way with “hospitality” of anyone’s worst nightmare. The art, fear factor, and gameplay make this so far the horror game of the year and maybe one of the best first person games I have played based on realism and authentic emotions that came out of it.

The story begins when Ethan, the main player, becomes aware of his girlfriend Mia’s disappearance. He then finds himself at a derelict mansion with an eerie presence about it. Walking among the environment was just as creepy as the houses and attracted the allure and sense of evil. The silence, dead crows, and hung animal parts were the first signs something was very wrong.  However, Ethan keeps exploring and ends up in a derelict guesthouse then all goes wrong.

Your first experience of the game comes when Ethan enters the guesthouse. A dark and foreboding place it is filled with nasty garbage and entrails left over from the evil family you soon become acquainted with. This game makes players look around each corner and each drawer to find items that help Ethan escape. Even though one cannot smell through the game the visuals given to the player tell all we need to know about how awful being in the guesthouse must really be. It is also a first step to the main story and gives a player a chance to acclimate to the environment and learn the game system.

One of the first encounters is the videotape. If I had to choose only one aspect of this game that stood out as a true horror it’s the videotape. The reason is they are not cut scenes but actual player experiences. You as the player become the subject of the tape. For instance the first tape is of a camera crew filming a TV series on haunted houses and investigating the disappearances associated with this particular house. The player steps in the shoes of the cameraman. Again it’s a first person encounter and the player does get to interact with the environment just as Ethan does. Except it is a past experience in a grainy video with its own nightmares. Though the player can choose not to watch the tapes, important clues are video recorded that will help Ethan.

Once meeting up with the Baker family things get even more intense. Making it all the more terrifying is the way the Baker family is portrayed. They appear to have been a likable southern family and try to bring on a twisted sense of hospitality toward Ethan. Jack is the worst of them even when trying to kill you and chop parts off he does it in a soft voice and a smile. They even welcome you to “dinner” and to join the “family”.

Don’t be fooled by Marguerite, the wife who from the dinner in the game trailer makes a scene. She might seem just crazy but as with the rest of the family will follow you and hunt you like prey. Granny is the most bizarre and probably creepiest of the Baker family as she is catatonic but appears in different places. Lucas the son is another member of that family and then there is Zoe.  Zoe communicates with Ethan by phone throughout the game giving him advice on how to escape. Besides the main bosses who you fight again and again, so most of the game ends up being you hiding and avoiding the family, players also fight other freakish monstrosities.

If you prefer your body parts to be intact then don’t play this game. Ethan is going to lose his limbs while other protagonists don’t fair so well and have worst fates. I felt at times like I was in a Chainsaw Massacre movie or Saw with the amount of fear driven moments and the violence that follows. It did make the game more thrilling and good enough to keep playing. That and I really wanted to get the chance to take down smiling creepy charming Jack and his twisted family no matter how many times I lose a limb, or what ever the weapon of choice to terrorize Ethan was at any given moment. The family likes to torture and mutilate.

The main premise of the game initially was to find Mia but it truly became more of a survival game, and escaping the house. Do you want to know about the family? There was that wanting to know but the need to hide, escape, and survive became more of necessity. It comes back to the first person view and playing based on your reactions. Death scenes are much more dramatic in first person or even watching the death of another through the eyes of the protagonist is much worse than a third person perspective.

Dialogue existed mainly from the family and bosses about to kill you. Ethan did have a dialogue between Mia, Zoe, and other characters met along the way. His reactions were authentic for the moment but the developers kept most of the reactions to situations for the players. Good thing because there is plenty of opportunities for players to react. Still cannot imagine playing this in VR.

Beyond the game story and the boss fights the gameplay was also worth playing this game for. There is a lot of sneaking around and backtracking at times after finding keys and objects to unlock doors or cabinets.  However,  there is a flow to the game that keeps the story moving.

Each new section of the houses brings Ethan closer to escape and finding Mia. To do so you must find clues and solve puzzles. You also get trapped and must find ways out before a family member finds you first. It’s also dark so there is that psychological fear that the player must overcome or use. Ethan gets a flashlight and there are herbs and chemicals around to craft medicine. Crafting is available in-game to make life little more tolerable. Some cabinets or tables offer available medicine, but use sparingly or risk running out during a major fight. Usually the fights are intense and there is little time to douse oneself with medicine let alone reload. Timing during boss fights is crucial as the family slows down briefly giving a moment to escape far enough to fire off rounds or find a way to take them out.

Scattered throughout the house are weapons and ammo but also items like lock picks and keys.  There are also items that can be inspected for hidden necessary items. Maps also show up in drawers. One thing that players will notice are hidden references to the Resident Evil series and Umbrella Corp. Meanings of this are something players need to play to find out. Clues about the family can also be found and news about missing persons are scattered in rooms. The creepiest parts of the houses were the surgical room and processing areas where one can only guess what was happening there.

[amazon text=Do you dare try to brave the horror that awaits you? Sure you do. Grab a copy from Amazon!&asin=B01GW8Y17G]

If you are a player looking for achievements then this game has them.  One achievement is earned by way of collectibles scattered throughout the house. These come in the form of Mr. Everywhere statutes obtained from breaking bobble heads. Players also have to find specific statuettes like an ox and dog heads to enter other areas and escape the house. This leads players to searching the house and running into more monsters. The house isn’t that big but the amount of time playing makes it a lengthier experience that and the boss fights.

As for the other little game essentials like storage and health the game has you covered.  There is a decent inventory system were players can carry weapons, medicine, crafting items, and ammo. However, players can also store items in chests that are accessed from any chest in the house.  Within the house there are safe rooms with save spots. The save spots are tape players. A health meter is attached to Ethan’s arm but like most first person games the amount of blood splattering in the screen is a good indicator of health during fights. One bit of advice, blocking can slow down the bosses, especially Jack, and give you an opportunity to run.  Weapons aren’t always effected causing Ethan to locate other ways of taking the boss out.  Other monsters are easier and a gun is good enough.

Looking at the game from a gameplay and first person survival aspect it is definitely worth playing. Only downside is playing on the PC. The keyboard keys were clumsy and not as responsive. It was a smooth gameplay with a controller, as the PC version has full controller support. Also the graphics at times were glitchy on the highest settings.

Besides a few minor interferences the game was actually a very worthwhile experience. It’s a thrilling experiencing with some of the creepiest evil villains of any game I have played and was a true horror masterpiece of survival and terror. If you are looking for a first person survival horror that will give you movie quality thrills and plenty of gore then Resident Evil 7 biohazard is a must play game.